Authority code with the "X" in front of the number

The license plates of Slovakia ( Slovak evidenčné číslo ) consist of two letters for the district , the Slovak coat of arms and a combination of three digits and two letters, the letters Q and W are not used.

On the left edge of the license plate has a blue band with the country code “SK” and the European star ring. From the beginning of the introduction of the labeling system on April 1, 1997 until joining the European Union on May 1, 2004, the Slovak national coat of arms and the letters “SK” were on a white background. Before June 1, 2006, there was only a hyphen after the district code.

The prefixes consist of five characters: a three-digit number (from 001 to 999) and two letters directly after the number.
The letter combinations are issued consecutively in each district, the first series of vehicles being “AA” and the first series of trailers being “YA”.

If you want license plates , five-digit alphanumeric combinations are possible after the district code , whereby the first three or four or all five characters are letters. Several letters “O” or digits “0” are also possible.

Export labels are always two lines, show a yellow background and a red field with holes for the month and year. The combination consists of the origin code, a "V" for export and a maximum three-digit number. After all combinations with “V” have been exhausted, another serial letter is added.
In Bratislava (distinctive sign BA ) there are now letter combinations that go up to “VU”, up to “VG” in Levice, up to “VD” in Košice and up to “VB” and “VA” in other regions (status: September 2019 ).

are temporary, show green letters on a white background with a green border and are valid for a maximum of one year. The combination consists of the letter "C" and a five-digit number (also with leading zeros).

are two lines and show red writing on a white background with a red border. The region code is followed by an "M" and a three-digit number. After all combinations with "M" have been exhausted, another serial letter is added.
In Bratislava (distinctive sign BA ) there are now letter combinations that go up to "MD", "MA" is in Košice, Trnava and Žilina (as of September 2019).

show red font on yellow background. The region code is followed by the letter "H" and a three-digit number.

show blue text on white background. The region code is followed by the letter "S" and a three-digit number.

show the letter "P" and a five-digit number.

of the Slovak Armed Forces consist only of numbers. Before joining the EU, the letters “ASR” for Slovak were on the left. Armada Slovenskej Republiky (German Army of the Slovak Republic) depicted under the coat of arms. The first two-digit number added with "50" gives the vehicle's registration year. A car with the combination 58-12345 would therefore have been registered for the first time in 2008 (58 + 50). Since joining the EU, the euro field has been on the left.

Diplomatic license plates show yellow letters on a dark blue background. The signs begin with the letters "EE" or "ZZ". It is followed by a five-digit number. The first two digits indicate the sending country. 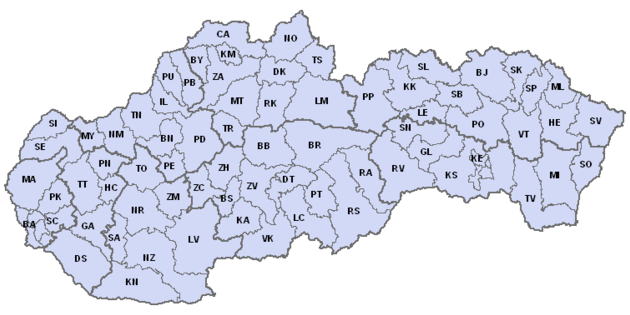 Geographical distribution of the abbreviations

Current distinguishing letters of the districts (Slovak okresy ) with the abbreviations that are intended for the second occupancy:

License plate for commercial use until 1997

Until the introduction of the current license plate system, license plates were issued in Slovakia according to the old Czechoslovak system. If necessary, another letter followed after the district code, then two digits separated by a dash. These labels became invalid as of December 31, 2004.

In the old Czechoslovak system, some districts had different district codes than they do today:

In the old Czechoslovakian system, some districts had district codes that are intended as secondary allocations in the new system:

In the old Czechoslovak system, some districts had additional district codes that have not yet been used in the new system:

1  Lies mostly in Asia .  2  Has additional areas outside of Europe.  3  Geographically located in Asia, but a member of the EU .