In some areas, the use of nationality symbols is regulated by international agreements in order to enable a globally unambiguous assignment. Such regulations exist, for example, for motor vehicles, for ships ( ship number ) and sailing boats ( sail symbols ) or for airplanes ( aircraft symbols ). Here the nationality symbol consists of (different) combinations of letters.

Nationality symbols in road traffic, also known as country codes or officially differentiating symbols for the country of registration , show others the origin of a motor vehicle , more precisely: in which country it was registered for use on public road traffic . It is a legal part of the official national vehicle registration number . 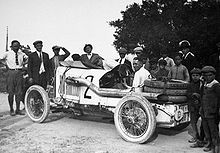 Steiger at the Targa Florio , note the nationality mark on the stern.

The symbol of nationality goes back to the International Agreement on Motor Vehicle Traffic (Paris Agreement) concluded on October 11, 1909 . The regulations apply in many countries in conjunction with the Vienna Convention on Road Traffic of November 8, 1968, in particular Art. 37 in conjunction with Appendix 3. The signatory states include the Federal Republic of Germany, the Republic of Austria and the Swiss Confederation.

Among other was for Germany D , for the areas of the dual monarchy of Austria-Hungary Austria A ( Austria ) and Hungary H , for the Swiss Confederation CH ( latin male Switzerland ) and the Principality of Liechtenstein FL agreed (since 1924).

The nationality mark has been regulated in Germany since March 1, 2007 by Section 21, Paragraph 2 of the Vehicle Registration Ordinance (FZV), previously (1910–2007) by the Ordinance on International Motor Vehicle Traffic - IntKfzV. With the entry into force of the FZV, the term distinguishing mark was introduced for the country of registration instead of nationality mark.

The affixing of the nationality symbol is not compulsory for Swiss vehicles. It is only compulsory if the vehicle is going abroad. Then the so-called CH sticker is necessary because the EU license plate is missing on Swiss vehicle license plates and no country code is given. The Swiss cross , which is instead shown on the rear license plate, does not replace the nationality symbol. The widespread ignorance of this rule means that Swiss people abroad are often fined for the lack of a sticker.

In the EEA countries, Switzerland and in member states of the Vienna Road Traffic Convention , the Euro plate is a replacement for the oval nationality symbol .

According to Appendix C of the International Agreement on Motor Vehicle Traffic of October 11, 1909, the nationality symbol is an elongated, round, white plate with a width of 30 cm and a height of 18 cm. Up to three letters must have a height of 10 cm and a line width of 15 mm. According to § 5 of this agreement, this distinctive sign is to be affixed to the back of a board or to the vehicle itself.

The Vienna Convention on Road Traffic (Appendix 3) of November 8, 1968 also allows a smaller character: 8 cm high letters with a line width of 10 mm are on a white ellipse with a width of 17.5 cm and a height of 11.5 cm in painted in black color. For country abbreviations with three letters, except for motorcycles and their trailers, a symbol 24 cm wide and 14.5 cm high is to be used. Trailers are also to be provided with the nationality symbol.

Apart from the fact that the nationality symbol must be clearly visible on the rear of the vehicle, there are no further general regulations regarding its affixing. In Germany in particular, alternative versions are possible under both agreements. Some states have their own requirements for this, including Namibia and South Africa , in which the nationality symbol must always be affixed to the rear right.

In practice, symbols such as flags or coats of arms, but also advertising, can occasionally be found on the signs. National peculiarities have also developed. In France an upside-down oval was common, in Switzerland and Liechtenstein the border is often missing. Bosnia and Herzegovina often uses BiH instead of BIH .

Nationality marks were not only given to independent states, but also to dependent areas and colonies . As a rule, the abbreviations are derived either from the country name in the respective national language (such as E for España ) or the English or French translation. Deviations occur, for example, in Switzerland , where the abbreviation CH comes from the Latin Confoederatio Helvetica . In other cases, the full state name is abbreviated as in RA for República Argentina . The abbreviations therefore do not correspond to the ISO 3166 standard that is customary today .

A systematic allocation can be seen above all in the British colonies and protectorates . The European regions initially received the letters GB for Great Britain used by the mother country, supplemented by a further letter such as A for Alderney , G for Guernsey , etc. To the colonies in East Africa , EA for East Africa plus K for Kenya , T for Tanganyika , U awarded for Uganda etc. A similar procedure was carried out with WA x for the West African areas . Even today, states like Kenya or Gambia (WAG) use this colonial system.

If the state name changes, this usually also has an impact on the national symbols. For example, after being renamed the Democratic Republic of the Congo, Zaire switched from ZRE to CD (and later to CGO ). However, such an occasion does not necessarily have to be present for a change of abbreviation: Romania changed R to RO , Finland 1993 SF (Suomi / Finland) to FIN and the United Kingdom 2021 GB to UK , without changing the state name or form.

In addition to the official nationality signs, there are privately issued, unofficial signs, which are usually intended to represent the affiliation to a certain region within a country. Examples are ovals with the letters BY (for Bavaria ), FRL (for Friesland ), VL (for Vlaanderen ( Flanders )), BZH (for Breizh ( Bretagne )) and C in front of vertical stripes in red and yellow or CAT (for Catalunya ( Catalonia )).

Special signs are also used for vehicles of the diplomatic and consular corps . Although they look like the nationality mark, they indicate the status of a vehicle instead of the origin. The letter combinations CC , CD and CMD (for French Chef de Mission Diplomatique ) are used, as well as, in a few cases, other abbreviations in the respective national language. See: Diplomatic license plates

On Spanish vehicles, rectangular signs with the inscription SP regularly lead to confusion. In this case, SP stands for Servicio Público and not for the country of origin Spain, which has E as a nationality symbol.

Country code in the mail service

In the past, it was recommended that the foreign postcode be preceded by the relevant country code for the letter service, separated by a hyphen , when sending letters abroad . These country codes were similar to vehicle nationality signs, e.g. B. D for Germany, A for Austria, CH for Switzerland, L for Luxembourg. This has not been recommended since the late 1990s. Since January 1, 2006, this handling is no longer officially permitted in Germany, in Austria since January 1, 2005.