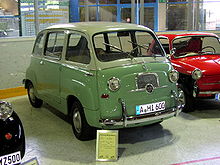 The Fiat 600 (also "Seicento") is a small car from the Italian car manufacturer Fiat . The car was produced from 1955 and established the brand's success in the 1950s and 1960s.

Along with its little brother, the Fiat Nuova 500, it was the first of the egg-shaped models from the Fiat concern. The aim was to use as little sheet metal as possible, which was still scarce and expensive in Italy at the time . Equipped with rear-wheel drive and a newly designed rear engine, the 600 was a kind of family car at the time, because at just 3.29 m in length and 1.40 m in width it could carry four people.

Initially 633 cc and 23 hp from a water-cooled four-cylinder in-line engine, the 600 reached almost 110 km / h, with which one could reliably cover long distances.

In 1956, the first Fiat 600 Multipla designed by Dante Giacosa came onto the market, a four-door six-seater, the front of which had been lengthened and enlarged. It was one of the first cars with a forward control design . In addition to the six-seater version, there was a small camping bus that could carry four to five people, as well as a special taxi variant .

In Argentina, the 600 was offered by Sevel Argentina .

The success of the 600 meant that it was also built in Spain as the Seat 600 ( Seiscientos ), in Yugoslavia as the Zastava 750 (nickname: Fićo ) and in Germany as the NSU Fiat Jagst with a fabric sliding roof. This version was also built by "Neckar-Automobilwerke AG" (formerly " NSU-Fiat " and "Neckar Automobil AG") in Heilbronn for export. In the 1960s there were several revisions in which the front and rear sections were changed, above all the doors hinged at the front instead of the rear and the engine was enlarged to 770 cm³. After the introduction of the Fiat 850 (1964), the 600 led more and more of a shadowy existence, wedged between Fiat 500 and Fiat 850, its sales figures shrank. Its production in Italy was discontinued in 1969, but persistently there was a German fan base until the 1970s who kept ordering, first the "770 Jagst" and then the "Jagst 2", most recently the Fiat 770 S offered in Germany Seat, which according to the vehicle documents was built by Seat in Barcelona .

In Germany, the Fiat 770 was only finally taken off the market after production in Spain ceased in 1973. The Zastava lived much longer , most recently with the engine enlarged to 850 cm³. The Zastava 850 is a Fiat 600 with an 850 cc engine, not a Yugoslav version of the (larger and more modern) Fiat 850. It was not until 1985 that production of the car was finally stopped. The cheapest model in Yugoslavia was henceforth the Zastava Yugo .

In 1998 the Fiat Seicento appeared , which has revived the name of the traditional car, but is a different, more modern design with front-wheel drive.