Steiger was a German company which in 1914 by the Swiss engineer Walther Steiger in Burgrieden in Laupheim as Maschinenfabrik Walter Steiger & Co. was founded. In 1921, there was a public limited company under the company Steiger AG converted. In the short period of its existence, around 3,500 passenger and sports cars were produced.

During the First World War , aircraft and aircraft engines were repaired at Steiger . From 1917 the owner and his designer Paul Henze were already working with motor vehicles. Originally they planned to manufacture farm tractors , but soon switched to the development of passenger cars. The first model, the Steiger 10/50 PS , came out in 1918 . The touring car with a 2.6-liter four-cylinder engine and 37 kW (50 hp) was also the most important model, which was also offered until the company collapsed in 1926. The special feature of its modern OHC engine consisted of an optional switchable dual ignition and a vertical shaft that drove the overhead camshaft via spiral-toothed bevel gears . The vehicles with a U-profile pressed steel frame, two leaf-sprung rigid axles and a pointed radiator were considered to be the most technically remarkable new creation at the beginning of the 1920s and the most progressive German production cars of their time .

At times the company employed up to 500 workers and employees. Despite their high-quality products, which have been compared to Bugatti in many ways , the company had to file for bankruptcy in the wake of the automotive crisis in 1926. By then around 3,500 vehicles had been built. 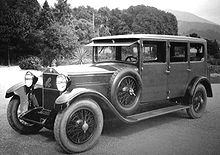 After the liquidation of his company, Walther Steiger went to the Swiss automobile manufacturer Martini , in which he and his brother Robert had held the majority of the shares since 1924. a. a 70 kW (95 PS) six-cylinder model . The luxurious car with a 4.4-liter engine, which came onto the market in Switzerland as the Martini-Six , was offered in Germany under the name Steiger-Martini 17/100 PS .

As before with Steiger, various racing versions were developed at Martini, some of which achieved spectacular successes (e.g. two first four places in the Klausen race in 1929). In the long run, however, the vehicles, which were carefully produced individually, could not hold their own against the increasingly cheaper large-scale competition from Germany, France and the USA. The end of the traditional brand was inevitable, on June 12, 1934 the last Martini left the factory in Saint-Blaise on Lake Neuchâtel .