Bevel gearboxes , also right- angle gearboxes , are a type of gearbox . They are used to transfer rotary movements and torques . A characteristic feature are the angled input and output shafts whose axes share a common point of intersection . The power is transmitted through bevel gears . Axial offset (if the axes of the cardan shaft and drive shafts do not intersect) are also referred to as helical-bevel gear units (corresponds to hypoid gears ).

With helical-bevel gear units, the sliding portion during the rotary movement is higher than with bevel-gear roller units. That is, the teeth roll and slide off. The sliding occurs through relative movements of the contact surfaces of the bevel gear and bevel pinion. This rolling or sliding movement in hypoid bevel gears favors higher gear ratios and correspondingly better efficiency when starting up compared to worm gears .

A bevel gear consists of a bevel gear (often a ring gear) and a bevel pinion. The axes are often offset by 90 °, other angles are possible. Areas of application for these angular gears are where high gear reductions, torques and movements are required. Mostly the drive takes place via the bevel pinion, left and right directions of rotation are possible.

Basic forms of bevel gear sets with the distinguishing feature of the flank guide are:

Drive of an old swing bridge - Teufelsbrücke (Mannheim) from 1902/03

The straight bevel gear as a machine element is mentioned as early as 1780, the first patents were granted to William Gleason around 1876. Straight tooth bevel gears still have a wide field of application despite the narrowing of their area of ​​application. The limits of their use are the peripheral speed, the noise and the transferable power. The limit of the peripheral speed is generally given as 8 m / s. The noise and the transferable power are closely related to the degree of coverage. In contrast to spiral and hypoid bevel gears, the degree of overlap in straight bevel gears results only from the pure degree of profile overlap. This moves - depending on the gear ratio - between 1 and 1.7 with a large number of teeth. In the original straight bevel gear, the longitudinal direction of the tooth was straight. This course of the teeth had the consequence that, with the slightest displacement of the axes, the tooth wear was immediately concentrated inside, outside, at the tooth tip or root. This significantly increases the noise and reduces the load-bearing capacity of the teeth to a minimum.

In addition to the involutes produced with machine tools such as Gleason as octoids of the 1st and 2nd type, there is also the possibility of the spherical involute. This can only be produced with forging processes, 5-axis machines or new with 3D printers. The advantage of the spherical involute, with ideal production, is rolling without slippage and thus significantly less wear in the contact surfaces of the teeth. In the forging process, parameters such as pressure angle can be optimally adjusted to the application. The tooth must be without an undercut in the forging direction and therefore easy to demold for low tool wear. A large part of the straight-toothed wheels and pinions in differential gears for trucks and cars are forged in Germany with involute balls. Since during forging with hot forging or warm forging, the steel structure of the blank is only formed but not destroyed by a cutting tool, these wheel sets are considerably more resilient.

In straight-tooth spur gears, a component occurs as a resultant of the circumferential force as a radial load, the resulting position of which is only determined by the pressure angle. In addition to this radial force, which acts perpendicular to the axis, there is no force which is directed parallel to the axis, i.e. in the axial direction. If this straight-tooth spur gear is given an additional tooth helix angle and one speaks of a helical gear or a helical-tooth spur gear, this tooth helix angle causes a component in the axial direction in addition to the radial force. If these relationships are transferred to a bevel gear, the torque to be transferred results in a component in the radial direction - that is, perpendicular to the axis - and a component in the axial direction. The calculation for determining the radial and axial force includes the pressure angle of the toothing, the angular function of the cone angle and thus the transmission ratio. Since the two basic or initial values ​​for this calculation are the same for both directions of rotation, the magnitude and direction of these forces also remain constant.

Helical-toothed and spiral-toothed bevel gears can also benefit from the slip-free ball involute in the straight case. The slippage through the bevel or the curve cannot be prevented and is more than offset by the greater load-bearing capacity of the teeth. In shipbuilding, these wheels are used for jet propulsion to withstand higher loads and achieve longer running times. These wheels can then only be produced with 5-axis machine tools.

Spiral bevel gears are used where straight-tooth bevel gears or helical bevel gears can no longer meet the requirements. In the case of straight bevel gears, three factors have been mentioned that limit the use of this type of gear. It was the peripheral speed, the noise and the transferable power.

When considering the noise behavior, one stays with the spiral angle, which, as already mentioned, has a decisive influence on the size of the overall degree of overlap. Noise studies on spur gears have shown that with an increase in the overall degree of overlap from 1 to about 2.5, a constant decrease in the noise level was recorded. It is interesting to note that a further increase in the degree of coverage beyond 2.5 to around 3 or 4 did not result in any further noise reduction. The overlap ratios can be transferred to bevel gears with certain restrictions.

The transferable power can also be influenced by changing the overall coverage ratio. When calculating the strength of the bevel gear teeth, the size of the degree of overlap is taken into account. From this it follows that with the same wheel dimensions and the same torque to be transmitted, the specific load in relation to the tooth root bending stress can be reduced by changing the spiral angle. In summary, it can be stated that the advantage of spiral bevel gears compared to straight-tooth and helical-tooth bevel gears is characterized by higher achievable peripheral speed, better noise behavior and higher power to be transmitted.

Due to the advantages of the spiral bevel gear set listed here, the application range of such bevel gears is naturally very large. At today's speeds, the drive axles of automobiles and other vehicles would no longer be conceivable without these spiral bevel gears. The machine tool manufacturer mainly uses this machine element, since the cutting speeds in mechanical production and thus the spindle speeds have increased significantly in recent years. In the sector of stationary gears, which are added to general mechanical engineering, the spiral bevel gear set is predominantly used.

Hypoid bevel gears are a form of spiral bevel gears. The main difference is that the pinion and ring gear axles do not converge at one point, i.e. the height of the pinion axle is offset from the wheel axle. This offset is called the offset. The axle offset should not exceed 40% of the outer cone distance for passenger car and light truck axle drives and a limit value of 20% for trucks, tractors, buses and rail vehicles.

The advantages of the hypoid bevel gear set can be summarized as follows:

In addition to general mechanical engineering, hypoid bevel gears are mainly used in the automotive industry. The offset causes the toothing to slide in the longitudinal direction of the tooth. This additional longitudinal sliding is not a disadvantage, but high pressure oil must be used for lubrication.

Bevel gear milling machines are still used successfully in series production. 5-axis milling is not economical for the series, in which small modules and diameters are usually geared, due to the long production time with small tooth gaps.

The various materials used to manufacture bevel gears include a variety of cast iron , non-ferrous and non-metallic materials.

The choice of material depends on various factors and operating conditions:

The following materials are possible:

The angular gearbox has many different applications such as locomotives, maritime applications, automobiles, printing machines, automation, mechanical engineering, steelworks, conveyor technology or test stands. Wherever power and movement are transmitted at an angle, a high degree of efficiency in cyclical operation is required and low maintenance is required. 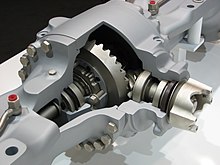 Bevel gears in differential gears, i.e. two axles rotate at different speeds, as occurs when a vehicle is cornering. Bevel gears are used as the main mechanism for hand drills. As the handle of the drill is rotated in a vertical direction, the bevel gears of the chuck rotate horizontally. The bevel gears in a hand drill have the added benefit of increasing the speed of the chuck, which allows a range of different materials to be drilled.

Spiral bevel gears are important components for rotating drive systems. These components are required when something is to be operated at high speed, high load and for a large number of load changes. This is used, for example, to redirect the shaft of a horizontal gas turbine engine to the vertical rotor. This is also used in the rotary tables of machine tools.

In order to minimize friction and heat, as well as to ensure protection against corrosion, different types of lubrication are selected for bevel gear units:

Grease lubrication
With slow running or actuators.
Splash lubrication
The bevel gear runs in the immersion bath.
Circulating lubrication
Lubricant is fed specifically to the bevel gear pair. It is usually lubricated with synthetic oils, rarely with mineral oils.

Radial bearings are usually sufficient for slowly rotating bevel gear drives . In the case of helical-bevel gear units (hypoid), there are also axial forces or movements that must be absorbed by axial bearings . The bevel gear pairs are usually made of hardened steel. High loads and low wear are desirable. In order to improve the noise behavior and to keep the wear of the tooth flanks as low as possible, the bevel gear must be calculated using computer programs, the contact area optimized and the contact pattern adjusted.

Furthermore, the rigidity or deflection of the bevel gears must be taken into account. The storage (possibly elastic and angle-compensating) must be adapted to the circumstances.