The Škoda Type 742 is a model series from AZNP under the Škoda brand, which was built in different versions (105/120/125/130) from 1976 to 1990. The type designation 742 was only used internally. An improved further development of the type 742 was the type 746 in the years 1987 to 1990 with the model designations 135 and 136 with engines that were later also used in the Škoda Favorit and Škoda Felicia . The respective vehicle models in the series were given names that were derived from the cubic capacity.

The model was presented at the Brno Fair in 1976. While the external appearance appeared to be greatly changed and contemporary, Škoda stayed with the rear-engined concept on the drive side. Although it was possible to make a name for itself with success in motorsport, the rear engine for everyday passenger cars was considered out of date even then. It was a water-cooled rear engine with rear drive . Due to new safety regulations, the tank was relocated from the front under the back seat. A station wagon was still not part of the range, so the too small trunk remained a significant disadvantage of the Škoda. Another point of criticism was the swing axle that was still used .

The model series was revised in September 1983: the modernized design of the front and rear with wide headlights and voluminous plastic bumpers lowered the C w value . With the more economical engines, the economy of the vehicles increased. In addition, the driving behavior has been improved through a wider track and rack and pinion steering .

In 1990, series production of the similar Škoda Rapid with what was then the most powerful rear engine was discontinued. Until 1994 the type 742 was still manufactured by hand in Mladá Boleslav from existing spare parts. The type 742 ended the rear-engined era at Škoda.

Several detailed changes in the front and rear of the vehicles make early and late models appear quite different.

105 models exported to France had to be renamed 1050 as Peugeot had protected the number 105 .

These basically better equipped models had a little more displacement and power, which makes the vehicles more spirited and also suitable as towing vehicles for trailer operation. As with the smaller engines, there was a slight power reduction in 9/84. There were several modernizations within the production process.

In Great Britain this range was called the Škoda Estelle. 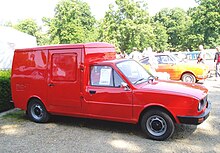 In the course of the production time, several prototypes were created , for example the BAZ Furgonet from the factory in Bratislava around 1983 , a panel van with a rear engine. It had a tailgate, but due to the position of the engine, it had a very high loading sill. Therefore, the vehicle was also given a side door.

A prototype with a front engine was also created based on the 120. Internally, the project was called Škoda Ortodox .

Together with the series Škoda 742 of Furgonet has a self-supporting body and the water-cooled four-cylinder - petrol engine in the rear. It works on the four-stroke principle and drives the rear wheels . The engine block is made of aluminum, has a timing chain and is installed lengthways in the rear.

Export to the GDR