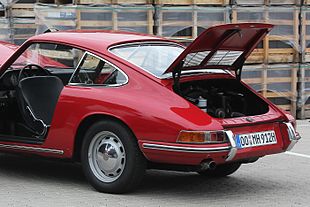 However, the term rear-wheel drive is often imprecisely equated with rear - wheel drive .

The widespread standard design among rear-wheel drive vehicles ( engine and transmission in front of the occupants, rear-wheel drive ) requires additional components and installation space due to the distance between the transmission and the axle differential . To transmit the power , a cardan shaft is required, which is usually hidden inside the car by a "tunnel". Due to the conflict of interests in costs, space and weight, the standard construction for small cars is not or only partially suitable.

One possible solution is to combine the motor, gearbox and drive axle into a compact drive unit. In the first half of the 20th century, this was mainly implemented as a rear-wheel drive in order to avoid the structural complexity of a driven and steered front axle . This design is also known as a rear drive block .

From the 1970s, front-wheel drive became the predominant type of drive, with rear-wheel drive becoming a niche solution for sports cars (e.g. Porsche ), small cars ( Smart ) and large buses. In America, there have been no rear-engined sedans since the Chevrolet Corvair was discontinued in 1969, which was notorious as a “rear-end spin”. In Europe, the Czech automobile manufacturers Škoda (with the Škoda Rapid until 1990) and Tatra (with the Tatra 700 until 1999) developed and manufactured sedans with rear-engined engines.

Hans Ledwinka and Ferdinand Porsche are considered the “fathers” of rear-wheel drive, even though the first patented motor car from Carl Benz had the engine in the rear.

On the other hand, there are the following disadvantages compared to vehicles with a front or mid-engine :

Example of a rear-wheel drive car: “ Cremeschnittchen ” (Renault 4CV) in action for the Paris police

The Hanomag 2/10 PS (Kommissbrot) does not have a rear-wheel drive, but a rear-wheel drive , since a transmission device (here: chain instead of cardan shaft) is installed between the central motor and the axle, so that the entire drive is not combined into one unit (rear-wheel drive).