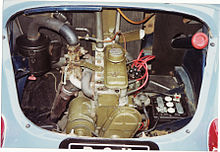 The Renault 4 CV was a four-door car with rear-wheel drive , the Renault built from 1946 to 1961. A total of 1.1 million vehicles were delivered. The water-cooled four - cylinder in - line engine (" Ventoux " or " Billancourt " engine) developed especially for this model was used in the Renault 5 until 1984 .

The Renault 4CV was developed clandestinely in occupied France from 1942 because, under pressure from the German occupying forces, the Vichy regime had banned the development and production of civilian vehicles. After successful preparatory work, led by Fernand Picard and Charles-Edmond Serre, testing of the prototypes could already begin in November 1945. The vehicle was officially presented in October 1946 at the Mondial de l'Automobile in Paris. As with the Citroën 2CV , the designation 4CV stands for the French tax class " CV ".

To produce the first series vehicles, Renault used the remaining stock of camouflage paint from the former German Africa Corps that was still in the factory . Because of its shape and its sandy beige color, the car was nicknamed “Motte de Beurre” (butter lump) in France. The German nickname "Cremeschnittchen" originally came from Saarland , where a customs union with France existed until 1959 and the 4CV accounted for around three quarters of all registrations. Vehicles from the Federal Republic of Germany should have been cleared. In German-speaking Switzerland, the car was generally called "Renault Heck".

Like the VW Beetle, the 4CV has a four-cylinder rear engine , but unlike this one, it has no air-cooled boxer engine, but a water-cooled in-line engine.

Series production began in 1947 at the Renault plant Billancourt , on the Ile Seguin in Paris and ran until 1961. As a license- produced FASA the car in Spanish Valladolid , were being assembled in France prefabricated parts. The Japanese manufacturer Hino also built the right-hand drive car under license from 1953 . It was mainly used as a taxi .

Together with the Citroën 2CV , the Renault 4CV advanced to the French version of the VW Beetle. Both were simple constructions that motorized the masses in France in the 1950s. In contrast to the Volkswagen, they even had four doors. All were posted on the B-pillar , so the 4CV had so-called suicide doors at the front .

In the Benelux countries, too , the 4CV shaped the streets at the time. Since the car was also manufactured in Valladolid , Spain, from 1957 , it has also established itself on the Iberian Peninsula. Because of the strong demand for small cars, the 4CV was not exported to the USA; this only happened with the Renault Dauphine , which had been built in parallel since 1956 and which looked much more "American". With the Dauphine in tow, so to speak, around 15,000 4CVs made it to the USA; most of the buyers were American soldiers formerly stationed in France.

The "Kattschewo" (quatre chevaux; Eng. 4 HP) had radial tires ( Michelin X) as standard from 1948 . During the production period, the car was only slightly changed, so there was a different dashboard in 1955, the engine output was increased from 17 HP (13 kW) to 19.5 HP (14 kW) and a starter with a magnetic switch was installed. In 1957 the characteristic "star rims" (jantes étoiles) were abandoned in favor of conventional steel disc wheels. The car now had 21 hp (15 kW) and could be ordered with heating. In 1959 the engine's output was increased to 26 HP (19 kW), in 1961 the “farewell models” got crank windows at the front instead of sliding windows.

In April 1954 the half million mark was celebrated and at the end of 1958 the 4CV became the first Renault to reach the one million mark. However, sales were already going down at the time. At the end of the last shift before the factory holidays in July 1961, the last 4CV rolled off the production line; according to official factory information, there were 1,105,547 cars up to then. However, the Japanese sister model Hino-Renault 4CV remained in production until 1966. Renault continued the concept of rear-wheel drive in the later Dauphine and R8 / R10 models . The engine, transmission and steering of the 4CV continued to be used in its front-wheel drive successor, the R4 , from 1961 .

The water-cooled four-cylinder in-line engine has a displacement of 760 or 747 cm 3 and a triple-bearing crankshaft as well as overhead valves and a side camshaft that is driven by a spur gear . The engine block from cast iron is wet cylinder liners and a cylinder head from an aluminum alloy provided. The connecting rod eyes are divided at an angle. The engine output is specified as 21 HP (15.4 kW) at 4000 rpm.

With the three-speed manual transmission, it can reach a top speed of 100 km / h, depending on the production time and engine power. In 1959 the engine was tested on the test bench in the GDR. The tests showed that the engine has a good elastic curve of power development, which justifies the waiver of a fourth gear stage. The complaint was that it works with excess fuel in the entire operating range and therefore has a high specific fuel consumption .

Manual and differential gears are in a common housing in front of the rear axle. From there the force is transferred to the rear swing axle . The front wheels have rack and pinion steering and are individually suspended from double wishbones . There are hydraulically operated drum brakes all around .

There was a small series of the 4CV with a folding roof , the Décapotable (literally: hood removable).

4CV from Police-Secours in a special version, only the lower part of the B-pillar is available.

The French gendarmerie in the big cities had a dark blue and white painted special version with a 33 hp engine and a much larger rear window to intervene quickly for ambush teams.

The Affaires model represented a spartan economy version , it had no chrome, seats that were covered like deckchairs, and not even an ignition lock with a key.

As the Commerciale model , the car had no rear seats and an uncovered rear compartment for cargo space. Because of the difficult loading option due to the rear engine, it found few buyers. Alternatively, Renault offered a front-engined station wagon / delivery van under the name Juvaquatre , a design from the 1930s that received the interior and the front-mounted engine of the 4CV in 1954. The Juvaquatre was built until 1960.

The French coachbuilder Chapron has converted some Renault 4CV into full convertibles with modern lines, and Brissonneau & Lotz produced the Brissonneau 4CV convertible from 1955 to 1959 .

The 4CV took part in races until the mid-1950s, and there were numerous conversions as racing versions.

The quasi-common successor to the 4CV and the Juvaquatre was 1961 with the Renault 4 (R4), a vehicle that was both a passenger car and a station wagon. The car also ushered in the era of front-wheel drive vehicles at Renault. The designers installed the engine and gearbox of the 4CV in the old rear-wheel drive arrangement in the front of the R4 in a brilliantly simple manner. The gearbox was in front of the engine in the direction of travel, the old rear-wheel drive was equipped with homokinetic drive shafts, so for front-wheel drive . In this way, the direct 4CV drive concept survived half a century, from the original design of the 4CV in 1942 to the end of production of the R4 in 1992.

The Spanish automobile company FASA produced the Renault 4CV under license in order to market it on the Iberian Peninsula as the Renault 4/4. 26,294 units of the 4/4 were produced between 1953 and 1959. The main visual distinguishing feature from the French original was the six chrome-framed openings located on the rear to the left of the license plate. They were used for additional ventilation and were placed in two horizontal rows with three puffs each.

“The sensation of the 'Salon', however, is the French rear-engined small car 'Renault 4 C V'. At a price of 14,000 S and fuel consumption of just six liters per 100 kilometers, this four-seater is probably the cheapest and most economical car in the entire exhibition. "

- Report from the first Viennese automobile exhibition in the world after the Second World War on the evening of May 5, 1948