The Renault 4 ("R4" for short, in France "Quatrelle" [katʁɛl]) is a small car from Renault ( Régie Nationale des Usines Renault ), which was produced from the summer of 1961 to the end of 1992. It was the first mass -produced vehicle in compact design with a one-piece tailgate hinged at the top (fifth door) and the first Renault car with front-wheel drive . The car, which is very successful on the market, was sold over eight million times during the 31-year production period.

On August 28, 1961, Renault presented its in-house project R1120 to the French press as an inexpensive passenger car , which was officially renamed Renault 4 only in 1965. The very simple, but functional construction with flat glazing, sheet metal shaping without large draw depths , level car floor and very simple equipment enabled not only cost-effective production, but also a low vehicle mass.

At the IAA in Frankfurt on September 21, 1961 he was a "fair star". At the beginning of October 1961, 200 white R4s were presented at the Palais de Chaillot in the run-up to the Paris Motor Show, at the time a remarkable marketing measure for Renault .

The R4 was modified for the first time in August 1967. The external changes included a new anodized aluminum radiator grille with a central strut, the wider frame of which included the headlights, so it was immediately recognizable. The Renault rhombus was attached to the left in the strut. The benches received upholstery. The most important innovation was the four-speed transmission instead of the three-speed transmission. Shifting was continued with a " stick shift " because the gearbox was installed in front of the engine. In autumn 1974, the R4 models were given a black plastic grill , similar to the larger Renault 16 . The Renault logo , the rhombus , was now back in the center of the radiator grille.

From mid-1976 to the end of 1978, a special model called Safari, initially available in two colors, was offered with rubber strips on the sides and special seats with integrated headrests. From 1977 angular parking lights and flashing lights were installed in the front. The exhaust pipe was relocated to the rear, previously the exit was on the driver's side in front of the rear wheel . The main silencer was in the left, front fender.

With the introduction of the Renault 4 GTL (1108 cm³ with 34 hp), the series received a gray plastic grill and standard side protective strips made of reinforced plastic at the beginning of 1978. The bumpers were painted instead of chrome-plated and the moldings were omitted. The front drum brakes were later replaced by the disc brakes of the R6. 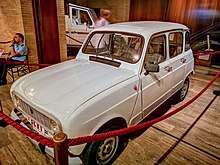 The Spanish Guardia Civil and the French Gendarmerie used the R4 as service vehicles until well into the 1990s. The R4 was criticized for its inadequate corrosion protection - the hollow profiles of the platform frame rusted through from the inside if the new car was not protected by cavity sealing . The processing quality also left a lot to be desired at times (depending on the installation location).

Chassis with chassis and engine 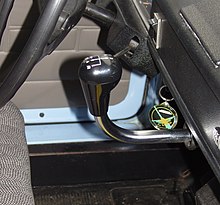 The longitudinally installed front-wheel drive set required a long bonnet and a relatively long wheelbase . The largely flat vehicle floor and the compact wheel suspensions with torsion bar springs and horizontal shock absorbers at the rear made good use of space in the above-average body. Thanks to the low curb weight , the output of 26 hp (19 kW) to 34 hp (25 kW) of the four-cylinder in-line engines with side camshafts and overhead valves was sufficient. In contrast to many other popular small cars of its time ( VW Beetle , Citroën 2CV , Fiat 500 ), the R4 was water-cooled . At first the cooling system was sealed. It had a platform frame to which the non-load-bearing body was bolted. The wheels were individually suspended and sprung with torsion bars , at the front on lower support levers with push struts and upper triangular links , at the rear on longitudinally built-in swing arms. The rear torsion bars were offset lengthways, so the left and right wheelbase differed by a few centimeters - as was the case with the Renault 5 , Renault 6 and Renault 16 models . As was common in French cars at the time, the suspension was designed to be very soft, and the headlight range could be adjusted with small levers on the headlights. The body got by with shallow drawing depths of the sheet metal and flat window panes all around, which helped to keep production costs low. The interior of the early models was extremely spartan with hardly any paneling and primitive tubular frame seats. As a luxury there was a fabric folding roof that could be opened halfway from the front and half from the back. The gearbox was shifted with a rod (round tube), which was guided above the motor, so-called crutch or turret shift.

The first Renault 4 had four drum brakes . Later models with a larger engine (depending on the country version 956 or 1108 cm³) had disc brakes on the front axle. In front of the engine, the gearbox with the differential gear and above it the rack and pinion steering were installed, which required a flat and long steering column that could penetrate the passenger compartment in a frontal collision and endanger the driver. A three-speed gearbox was installed by 1967, then one with four gears. The gear wheels of the fourth gear sat under an additional cover in front of the otherwise vertically longitudinally divided aluminum gear housing. Therefore it was a little longer and the front cross member was therefore angled forward . These transmissions had a "Z" shift pattern, that is, reverse gear and 1st gear were opposite each other. The input shaft protruded forward so the engine could be started with the jack crank inserted through the bumper and frame to the transmission. Cars produced from 1975 had the same gearboxes as the Renault 5 with gray cast iron housings and "H" gearshifts. They could not be started with a crank and therefore no longer had the characteristic hole in the bumper. The R4s of the first years of construction still had 6-volt on-board voltage, and the starter was operated via a push button on the dashboard. As early as the early 1970s, the vehicles had a brake force regulator and continuously adjustable backrests on the front seats.

The engine output was only marginally increased over the years, with the first vehicles built from 1961 from approx. 26 HP to 34 HP (from August 1970) by the end of production. In 1978 Renault also brought the R4 GTL with 1108 cm³ (normal version 845 cm³) onto the market, which offered more torque while maintaining the same maximum output, but consumed less. From 1983 the smaller models had only 29 HP for environmental reasons, only the GTL version had 34 HP. In Austria, all versions were delivered with 34 hp, after the introduction of the 3-way catalytic converter (with lambda probe), sales in Austria were discontinued. An exception was the Renault Rodéo , which first appeared on the market in autumn 1970 as Rodéo 4, also with 845 cm³. In autumn 1972 the Rodéo 6 followed, which had a displacement of 1108  cm³ and 45 hp. In the summer of 1981 the Rodéo 5 replaced both models with 1280 cm³ and 45 hp.

In October 1962, the conversion specialist Sinpar presented the first model of a Renault 4 converted to all-wheel drive at the Paris Motor Show with the approval of Renault . Renault was subsequently also responsible for the sales and maintenance of this vehicle. Initially, the conversion took place mainly on the type 4L and was continuously adapted to its changes during the long production period of the Renault 4. After Sinpar was taken over by Renault in 1980, this task was taken over by SOMAC (Société de Montage Autos Camions).

In Colombia the R4 was also available with a 1289 cm³ engine from the R12 , which enabled speeds of up to 145 km / h. Sinpar provided the Renault R4 with switchable all-wheel drive in small series. The frame, chassis, transmission and, in part, the engine of the R4 were also used in the Renault 6 , which was manufactured from autumn 1968 to spring 1986 .

The Renault 3 - R3 for short - was the economy version of the Renault 4, which was only offered in France from September 1961 to August 1962. Equipped with a smaller engine of 603 cm³, it was classified in a cheaper French vehicle tax class. In addition to its more economical features, it was particularly characterized by the missing third side window between the C and D pillars .

However, the model did not establish itself on the market, which is why production was discontinued after just under a year.

The last models were sold in Germany at the end of 1988, as the R4 no longer met the stricter emission limits in Germany. Production for the German market ended with the Salü model , which was limited to 500 copies . The last R4 imported to Germany was bought new by Günther Jauch in 1988 and is now owned by Renault.

At the end of 1992, production of the Renault 4 in Colombia and Revoz in Slovenia was discontinued. By then, a total of 8,135,424 vehicles of the various R4 models had rolled off the assembly line.

In 1998 Renault launched the Kangoo, a vehicle that the press called the legitimate successor to the R4.

According to the final report of the Federal Office of Economics and Export Control , 54 Renault 4s were scrapped in favor of the environmental bonus between January 27, 2009 and July 31, 2010.