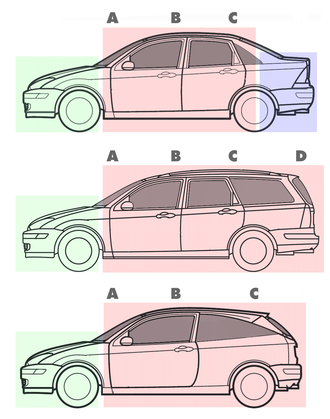 At the rear of sedans , usually in the trunk is, there are three main forms: saloon , hatchback (or hatchback ) and hatchback . In addition to the pure appearance, the design depends on aerodynamic , technical and functional factors.

The development of today's characteristic forms began after the Second World War with the pontoon body , i.e. a closed form without attached fenders .

Note: The years under the pictures refer to the market launch of the respective vehicle.

Before the Second World War, closed vehicles were dominated by an almost vertically sloping, mostly outwardly curved rear line that stretched from the roof to the bumper . Luggage was carried on the outside of the car, for example on a fold-out luggage rack. There was little space behind the rear seats, so trunk lids were not common, except for coupés and open two-seaters with a correspondingly longer trunk, where a lid hinged at the bottom could serve as the backrest of an emergency bench ("mother-in-law seat"). In the 1930s, the streamlined shape came into fashion. The basic shape of the vehicles became less angular, the rear was flowing or round. Strong bulges are reminiscent of a hump, which is what the terms Buckelvolvo and Buckeltaunus are reminiscent of today . This design was also found in further developments in the 1950s, for example in the DKW F93 . The longest built model is the VW Beetle .

The notchback or sedan prevailed after the pontoon body after the Second World War . The trunk , and the engine compartment in rear-engined vehicles , is clearly separated from the passenger compartment and forms a step towards the roof of the vehicle. A bulkhead or cross bracing under the C-pillars stiffen the self-supporting body . One speaks here of a three-box design or three-box principle (in English three-box styling or three-box design ), in which the front, passenger compartment and rear each resemble a box. This type of construction can still be found in most vehicle classes above the compact class . In the compact class, notchback models are now often referred to as the lower middle class . In the 1950s, many small cars such as the Austin A35 , Lloyd LP 300 and the Goggomobil had a notchback, and this shape was retained in the Trabant sedan until 1991. Younger German small car models such as the Opel Corsa A and VW Polo II were also offered in a notchback version until the end of the 1980s. A sharp decline in demand in Germany has meant that such vehicles have only played a role internationally since the 1990s. Smaller cars with notchbacks are still widespread around the world, for example a notchback version of the Mazda2 has been produced mainly for the Chinese market since 2008, and notchback versions based on the VW Polo are still available today, but they play almost no role in the German market.

In US parlance vehicle form is called Sedan referred to as "limousine" there is always a stretch limo meant.

With the current models, the rear window is flatter and the trunk lid is shorter. For easier loading, the loading edge is often placed between the license plate and the bumper. The transition to the modern hybrid form mentioned below is fluid. Various notchback models were also offered as liftbacks , i.e. with the tailgate hinged above the rear window, for example the Daihatsu Applause (1989), the Seat Toledo (1991) and the Škoda Superb II (2008).

When hatchback , hatchback , full rear or English fastback the tail falls immediately behind the first or second row of seats with an approximately constant gradient from the roof to the rear end of the body from. In some cases, these vehicles also have a narrow step at the rear, occasionally such shapes are classified as stubby rear , but the term is rather uncommon.

In hatchback vehicles, the tailgate is often, but not always, hinged to the edge of the roof, so that the trunk can be accessed like a station wagon. Such cars are referred to as three- or five-door models to differentiate them from notchback sedans. Some types such as the Opel Insignia are optionally available as four or five-door models. It is not possible to clearly distinguish the hatchback shape from coupés , some of which are hatchbacks. There was a sloping rear on streamlined cars as early as 1945 , from which, among other things, the shape of the VW Beetle and Porsche 356 is derived. The typical shapes of the hatchback today were created in the company of the compact class and sporty coupés that emerged in the 1960s .

Compared to the notchback, the hatchback offers better space utilization and sometimes also less air resistance . Depending on the shape, however, a comparatively large induced resistance can also result.

The hatchback as a sporty element (fastback)

Many coupes had or have a sloping rear line. Ford used the term Fastback for the hatchback of the Ford Mustang introduced in 1964 .

The hatchback for space utilization

The basis for the spatial concept of the compact body was formed in 1959 by the Austin Mini with a hatchback , which also had the principle of the transversely installed front engine, which was later to become established. Based on this, various compact cars were designed, including the Morris 1100 in 1962 and the Hillman Imp in 1963 . In order to improve the use of space, the development went towards the hatchback with a tailgate hinged above the rear window ( liftback ) and folding rear seats. An early representative of this type is the Innocenti A40S Combinata presented in 1962 and the Renault 4 released in 1961 . Later such models were Renault 16 , Autobianchi Primula , Simca 1100 and Glas 1304 CL . The Trabant 603, developed in 1966, was also a pioneering concept towards the modern, small compact car, which, however, could not be transferred to series production for political reasons. In Germany, the breakthrough of the new compact car design only came years later with the appearance of the VW Golf in 1974, whereupon other vehicle manufacturers also designed corresponding vehicles, such as Opel the Kadett City and Ford the newly designed Escort model from 1981. The previous vehicle segment was accompanied by this breakthrough renamed the lower middle class to compact class , regardless of the fact that this class also includes vehicles that do not have a hatchback or compact body.

The hatchback in the middle and upper class

Even higher-class vehicles have had flat and tapering hatchbacks since the streamlined bodywork of the 1930s and 1940s. However, these cars did not have a tailgate hinged over the rear window. This did not emerge until the 1960s and was initially unable to spread successfully. In the course of the 1980s, however, the hatchback also established itself in the middle class.

In the upper middle and upper class, hatchbacks were exotic for a long time. The few exceptions included streamlined bodies from the 1940s and Tatra and Citroen cars . In 1985 the Ford Scorpio was initially offered exclusively with a hatchback, but fell through with the public at the time. Since around 2006, however, there has been a trend towards hatchback vehicles in the upper middle class and luxury class, as demonstrated by the Audi A7 , BMW 5 Series GT , Citroën C6 and Porsche Panamera .

The hatchback or steeper rear , i.e. an almost vertical rear surface, is found in vehicles from the interwar period, otherwise in station wagons and small cars , as particularly good use of space is necessary here. A hatchback is necessary for the short design of four-seater small cars, small cars and microvans . With larger types of automobiles such as station wagons, vans or sports utility vehicles , this means that one more bench seat can be accommodated or it extends the load space.

While the use of space is favored by the hatchback, this form of the body closure can have a negative effect on the drag coefficient and thus the energy consumption due to the braking air vortices behind the vehicle . However, the hatchback or notchback versions of many vehicle models are shaped even more unfavorably.

In addition to the typical construction methods, there are also numerous exotic variants in automobile history.

In addition to the names of the shapes, the term station wagon stands for vehicles with a large tailgate , rear side windows and rear seats. Since the rear door provides access to the interior, the vehicles are often referred to as three- or five-door . The tailgate is counted as a door, but is only used for getting in and out of a few vehicles such as the Saab 95 with a third row of seats.

In British English there are the terms hatchback ( hatch : hatch , pass-through ), in American English liftback ( lifting back ). Hatchback or liftback are often translated as steep or hatchback , as these are the usual forms with a tailgate hinged on top. However, there are also notchback models.

Initially, the station wagons were three-door, such as Crosley CD Station Wagon (1947–1952), Fiat 500 Giardiniera (1948–1955), Austin A40 Farina I (1958–1961) and Toyota Corolla Liftback (1976–1979). Five-door cars were the exception. With a hatchback and front-wheel drive , the Citroën Traction Avant Commerciale (from 1939 with a two-part tailgate: flap up and, for the spare wheel , flap down; resumed in 1954 with a one-piece tailgate; interrupted by the Second World War ) was far ahead of its time. The DeSoto Suburban (1946–1954; just as three rows of seats and three-legged sideline like the aforementioned Citroën Traction Avant Commerciale ) was aimed at similar target groups ( traveling salesmen , taxi operators ... ). At the time of the economic boom, the car and baby boom , the Renault 4 (1961–1992) was a hatchback car that became a family car. It was available with three doors as a high roof "Fourgonette" or as a five-door sedan.

Only offered as a five-door model, the Renault 16 (1965–1980) proved to be comparable for families. Today most station wagons have five doors.

In order to enable unhindered access to the interior via the third or fifth door at the rear, the stiffening cross member under the C or D-pillars is missing in station wagons. This means that statically no three-box design is possible here, as is the case with notchback sedans, which makes station wagons more difficult to build (two-box design). There were always exceptions, such as the five-door Kaiser-Frazer Vagabond with horizontally split rear door or, more recently, the Daihatsu Applause (1989-2000) and the Seat Toledo (1991-1999). At first glance they have a normal notchback, but the tailgate can be opened up to the roof like a hatchback vehicle.

A current example is the Škoda Superb II (since 2008). On these trolleys, the tailgate , known as the twin door , can be opened in two stages: On the one hand, it can only be opened up to the lower edge of the window to load smaller items. On the other hand, there is the option of lifting the entire tailgate including the window and thus gaining greater access.