Tatra advertisement on Karl-Marx-Allee in Berlin (2009)

The Tatra trucks as is a Czech automobile manufacturer based in Kopřivnice . Tatra is one of the oldest automobile manufacturers. Tatra gained fame through the development of the central tubular frame and especially through aerodynamic models such as the Tatra 77 and the Tatra 87 with air-cooled rear engine. These technical developments also serve as the basis for the later Volkswagen Beetle . After the Second World War, Tatra was nationalized; Planned economy processes tried to ban Tatra car construction in order to use the capacities of the Tatra works for all-terrain trucks. In the meantime, there was a shortage of representative limousines in international government circles, so that in 1956 the Tatra 603 was developed. With the Tatra 700 , the last passenger car came onto the market in 1996, the last rolled off the production line in 1999. Since then, Tatra has only manufactured trucks that also take part in the Dakar Rally .

After numerous changes of ownership, Tatra belongs to the Czechoslovak Group .

In 1924 the Tatra works were created through the merger of the Nesselsdorfer Wagenbau-Fabriks-Gesellschaft with the wagon factory Ringhoffer AG in Prague- Smíchov. The factories located in Czechoslovakia after the collapse of the Austro-Hungarian monarchy were named after the highest mountain range in the country, the Tatra Mountains . The vehicles have been called Tatra since 1920, previously the brand name "Nesselsdorfer (Kopřivničan)" or "NW" (Nesselsdorfer Wagenbau) had been used.

The headquarters were moved from Vienna to Prague because Austria had become a foreign country after the war. At the same time, the Austro-Tatra was founded in Vienna as a general agency .

In the same year, the designer Hans Ledwinka developed the prototype 11, a car with a central tubular frame , air-cooled two-cylinder boxer engine at the front and a swing axle at the rear, popularly known as an iron because of the shape of its pointed, radiator-free front section. This was followed by a number of this construction line, also with four-cylinders. In 1931 the prototype V-570 was built, with a streamlined body and air-cooled two-cylinder boxer engine in the rear. This car did not go into series production, but can be considered the ideal predecessor of the German Beetle ; Ledwinka was friends with Ferdinand Porsche , and both of them had a lively exchange of ideas. The large, streamlined Type 77 followed in 1934 with an air-cooled V eight-cylinder in the rear with a 3-liter displacement and OHC valve control, which in the last pre-war stage was type 87 up to 160 km / h (thanks to the low drag coefficient of c w = 0.36). Ledwinka's son Erich played a key role in the development of this series . In the years 1947–1950, Miroslav Zikmund and Jiří Hanzelka took the Type 87 on a trip through three continents.

After the Second World War , the new socialist leadership tried to convert the Tatra brand to truck production. The smaller version of the Type 87 with a 2-liter four-cylinder, the Type 600 Tatraplan , introduced in 1947, was relocated to the Škoda plant in Mladá Boleslav . However, this project was abandoned when the production of own representative vehicles became necessary. For this purpose, the Type 87-based models 603 (since 1956) and the Vignale bodywork Type 613 (since 1975) were built in a manual manner. As a last attempt in the car business, Tatra launched the type 700 in 1996 , but production was discontinued after two years. Since then, Tatra has limited itself to truck production.

All Tatra trucks are characterized by air-cooled V-engines, spur gear - differential gear , a central tube frame (also Tatra concept called) and all-wheel drive off. Thanks to the pendulum axles, they are suitable for off-road use.

The three-axle Type 111 with V-12 diesel became legendary (from 1943, some successors). A further development of the Type 111 was the heavy type 141 tractor, which was manufactured from 1958 to 1970 in the Bánovce nad Bebravou branch in Slovakia .

The light Type 805 with V-8 petrol engine, introduced in 1953, was mainly used in the armed forces. Production was soon stopped, as a decision by the Ministry of Mechanical Engineering in 1952 meant that Tatra should specialize in vehicles with a payload of 7 to 10 tons. Zikmund and Hanzelka made another trip around the world in 1959–1964 with the Type 805.

From the 1960s onwards, only 10-ton trucks were produced. In 1961 the Hauber type 138 went into series production and replaced the outdated type 111. A test site was built, which was mainly used to test the truck properties. Ten years later, after a further decision by the Ministry to specialize Tatra in future in all-terrain trucks with a payload of 12 tonnes or more, the type 138 was replaced by the type 148, which is still the most common hooded truck in the Czech Republic. The latest generation of Tatra hoods is the JAMAL type, which has been produced since 2001 .

1967 was heavy forward control type 813 presented, which was the successor of the type 141st This type is still considered to be one of the most all-terrain trucks. It is used successfully in trial races. A special feature is the independent suspension with extreme spring travel. There was a special version with a 1000 hp gas turbine for the armed forces. In the first reduced gear it reaches 3.6 km / h at full throttle and is able to salvage stuck tanks weighing 40 tons. The climbing ability is 100%, the fording depth 2.20 m. The fuel consumption is between 65 and 250 liters per hundred kilometers, and 500 liters per hundred kilometers in heavy rescue operations. The truck was not approved for the Paris-Dakar Rally because it was classified as a prototype. That is why Tatra participated with the successor type 815.

The type 815 followed in 1983, which was produced in large numbers and in various designs. The latest cab-over-engine bears the name TERRNo1. The Type 815 has won the Paris-Dakar Rally several times in the truck category.

Privatization, frequent changes of ownership and the end of car production

After the Velvet Revolution in Czechoslovakia, a controversial coupon privatization was carried out, even if Daimler AG expressed great interest in a takeover with continuation of production. The coupon privatization has not proven itself. Many company shares ended up in different funds. The result was a disagreement with regular changes of ownership and management. Another hurdle was the separation of Czechoslovakia at the end of 1992, when plants in the Slovak part of the country were lost.

Several previously elementary truck customers were lost due to the economic slump in the former Comecon countries . Tatra's rescue was a large shipment of military trucks to the United Arab Emirates .

Passenger car production also found it difficult to find buyers, especially because the Tatra 613-4 model was an unconventional design from the early 1970s as a luxury class sedan with a rear-engined engine for western ideas. Even the comparatively low price did not attract any well-funded customers in the West. Adjusted for inflation, a Tatra from 1993 would cost around 55,000 euros in 2017, a comparable Mercedes S-Class around 80,000 euros. In 1996 the successor model Tatra 700 was presented. Basically, it was an extensively modernized T613, with numerous innovations such as airbags , anti-lock braking system , cruise control and other equipment elements, at least at first glance, it was able to catch up. The Czech government expressed interest in the vehicle, but only ordered a small number of vehicles. One did not want to arouse negative memories of the socialist regime among the population, as high officials of the KSČ ( papaláši ) in particular were chauffeured in Tatras during this time and the private vehicles were never sold. Among other things, Prime Minister and later President Miloš Zeman was driven in the T700. In 1999 the government ordered about 200 Octavia with a wheelbase extended by about 8 cm from Škoda for their authorities. In the same year Tatra stopped car manufacturing after less than 100 vehicles.

Tatra was the only engine manufacturer for trucks to offer an air-cooled V8 cylinder with Euro 4 and, since 2008, also with Euro 5. In addition to the Tatra Terrn ° 1, Tatra also offered the long-nosed Jamal. Production ranges from the 4 × 4 to the 16 × 16, as trailers can also be driven by a coupled shaft .

In August 2011, DAF Trucks N.V. acquired a 19% stake in Tatra. DAF Trucks N.V. now also supplies Tatra with engines and cabs. The first result of this collaboration was the Tatra Phoenix presented in September 2011 . The central tubular frame with axles and frame is produced by Tatra and the cab and engine are contributed by DAF. This and other Tatra models will in future also be sold through the official DAF dealer network.

In March 2013, Tatra was sold to a consortium of new owners at auction for $ 9.0 million after Tatra was declared bankrupt. In 2014 Tatra sold 850 trucks. 80% of this was exported. Tatra Trucks is currently part of the Czechoslovak Group based in Prague, a group of companies that focuses on traditional industrial operations in the former Czechoslovakia and is building on an economically positive development. In 2016, 1,326 Tatra vehicles were built. 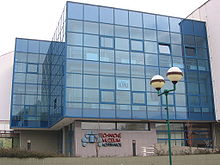 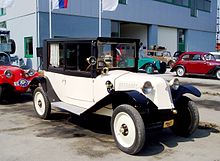 There is a technical museum in Kopřivnice . Inside the building there are historic road vehicles, including passenger cars and off-road vehicles, which have won the Dakar Rally several times . Outside there is the Slovenská Strela train (Slovak arrow) . 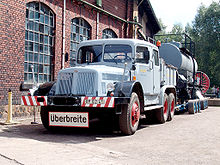 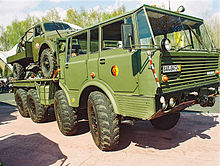 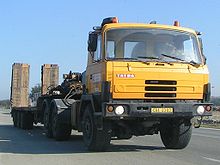 The Tatra 815 as a THW emergency vehicle