This article explains the economic term, for other meanings see energy balance .

Energy consumption colloquially denotes the need for energy for different uses. Energy is needed to work to do. Depending on the application, mechanical work (moving, accelerating, braking), lighting and heating and cooling processes are differentiated and identified with time-related measurement and characteristic values.

The term energy consumption has developed colloquially and economically (especially in the energy industry ). From a physical point of view, energy can not be consumed in a closed system, only converted . In the physical sense one speaks of exergy consumption or entropy generation . 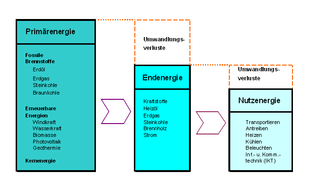 Schematic representation of the relationship between primary, final and useful energy as well as the associated conversion losses

By energy consumption is colloquial and economic linguistically meant the consumption of final energy used by consumers in the form of processed petroleum, natural gas and coal products, such as fuels (petrol, diesel), fuel oil, coke, coal, as well as electric current or district heating becomes. This energy is converted into useful energy for mechanical work (moving, accelerating, braking), for lighting and for heating and cooling processes. In engineering, energy consumption is defined as “the amount of certain forms of energy used to meet energy needs under real conditions”.

Final energy is obtained from naturally occurring raw materials belonging to the main groups of fossil fuels , renewable energies and nuclear energy . The generation and use of energy is recorded in energy balances , which begin with the extraction of raw materials as primary energy and lead through conversion processes to the final energy, which is accordingly also referred to as secondary energy.

The final conversion step into useful energy (also known as tertiary energy) for consumers depends to a large extent on the devices, equipment and drives used. This application step cannot be recorded in higher-level energy balances, such as the energy balance for the Federal Republic of Germany , which are therefore limited to the two areas of primary and final energy. Further balances, including useful energy, are carried out in production-related energy balances and efficiency analyzes.

Colloquially, other units of measurement are commonly used, such as kilowatt hours (kWh) for electricity, liters for fuels or weight units for solid fuels. The energy consumption can also be related to a specific result (e.g. fuel consumption per 100 kilometers driven or electricity consumption of a device per year ).

See also : List of countries with the highest energy consumption

In 2017, the total global production of primary energy was around 14,035 megatons of oil equivalent (corresponding to 163,227 TWh). This included electricity generation of around 23,856 TWh. When this energy was used, around 32.840 billion tons of carbon dioxide were released. The market value of the energy consumed worldwide was approximately 9.1 trillion US dollars in 2015.

During the conversion of the primary energy into usable final energy and finally also during the conversion into the useful energy, losses occur due to the efficiency of the necessary treatment and conversion processes as well as through transport. Energy can be converted from one form to the other, but the second law of thermodynamics sets fundamental limits: thermal energy can only be converted into other forms of energy and transferred between systems to a limited extent. Therefore, losses occur when converting the primary energy, especially in electricity generation. If fossil fuels are used, they are 60 to 70% if only electricity is generated ; By using the resulting heat as district heating, the losses can be reduced to approx. 50% reduced. Remarkably, despite economic growth, energy consumption in Germany has not increased since 1990, but decreased somewhat. Between 1990 and 2011, real gross domestic product increased by 34%, but energy consumption decreased by 9%. The reasons for this are the technological progress in the energy industry, the more economical and more rational use of energy and the relocation of production abroad (see, for example, the list of the largest aluminum producers #production ). The fluctuations in energy consumption in recent years are mainly due to the weather conditions (different heating costs in cold / warm winters).

Primary energy consumption in Germany from 1990 to 2018.
1 including other mineral oil products
2 mainly firewood, also sewage sludge and garbage

Use of final energy

Portions of this article appear since 2011 is out of date to be .
Please help to research and insert the missing information .

38.9% of the final energy is converted into mechanical energy (transport tasks, machine drive, etc.), 25.6% into space heating and 22.6% into other process heat. These three areas of application account for 87.1% of the final energy consumption in the Federal Republic of Germany. 5.0% is used for hot water, 2.9% for lighting and 2.4% for information and communication technology (ICT) (balance sheet year 2018).

The colloquially little used energy unit gigajoule when specifying per capita consumption can be illustrated by converting it into kWh or oil quantities : 1 gigajoule (GJ) = 278 kWh or the amount of energy when burning 23.9 kg of crude oil.

Origin of the primary energy

Origin of primary energy in Germany in 2011, share of imports

Around 69.9% of the primary energy for the Federal Republic of Germany comes from imports. In 2018, 9,176 petajoules of the total requirement of 13,129 petajoules were imported, primarily mineral oil and natural gas as well as hard coal. These energy sources have a high import dependency of 88 to 97%. The domestic sources of lignite and renewable energies were not dependent on imports.

In 2018 the following were imported into the Federal Republic of Germany:

The origin of the imported natural gas may no longer be published since 2015, this is due to the provisions of Section 16 of the Federal Statistics Act in conjunction with Section 11 Paragraphs 2 and 5 of the Foreign Trade Act . Because the transfer of the data could affect individual companies in their trade and business secrets.

The last available status of the Federal Ministry for Economic Affairs and Energy from 2015 is composed as follows:

Per capita consumption of primary and final energy

Per capita consumption in Germany in 2011 - fossil primary energy

The consumption of final energy in Germany in 2018 totaling 8,963 petajoules (PJ) corresponds to a per capita consumption of around 29,990 kWh per inhabitant. Of this, 9,011 kWh are fuel, 7,676 kWh natural gas, 6,183 kWh total electricity, 1,526 kWh of which are for private consumption, 1,850 kWh are for heating oil and 2,459 kWh are for other energy sources, including firewood, peat, sewage sludge and garbage.

Development of energy prices in Germany

With the worldwide increase in energy consumption, there is a significant increase in energy prices. This price development is recorded for the various types of energy using official data and presented with price indices. The Federal Statistical Office has compiled its own price statistics and related information from the EU Statistical Office ( Eurostat ) for the Federal Republic of Germany and related them to the base year 2015.

Taxes and surcharges are taken into account in the way they are included in the final price: import prices are therefore stated without VAT, as they are offset in the course of the input tax deduction . The consumer prices accordingly include value added tax as well as duties and levies.

The import prices and production prices for primary energy excluding natural gas increased in the period from 2015 to 2019. With the beginning of the Covid 19 pandemic , the prices have in some cases more than halved. The consumer prices for the most important final energy sources heating and motor fuels as well as for electricity rose faster than the general consumer price index up to 2019, the most for heating oil by 14.5%, for fuels by 3 and 8.4%, for electricity by 6, 8%, natural gas and district heating decreased by 4.2% and 1.9% in the same period compared to 2015.