Exergy refers to the portion of the total energy of a system , the work can perform when in the thermodynamic (thermal, mechanical and chemical) equilibrium is brought with its surroundings. Exergy is a potential between at least two states, one of which is usually the environmental state. In contrast to energy, exergy is not a conserved quantity because it is degraded by irreversible processes , i.e. H. it is converted into anergy .

The term exergy goes back to a suggestion by Zoran Rant in the 1950s.

Exergy losses occur z. B. in heat transfers . If energy flows into the environment in the form of heat from a poorly insulated hot water pipe , it can no longer be used to do work. However, the principle of conservation of energy applies : the pipe and the environment together have the same amount of energy as before the start of heat transfer.

The second law of thermodynamics ( entropy ) restricts the first law with regard to the possible energy conversions . If, for example, two substances of different temperatures are mixed with one another in a thermally insulated ( adiabatic ) mixing chamber, no losses can be identified in the energy balance equation, the total energy in the system remains the same.

Nevertheless, there are thermodynamic losses, since entropy is generated by this process. Before that, the system that contains the two substances has exergy that a heat engine could use to equalize the temperature between the substances . Afterwards this is no longer possible because of the general validity of the second law, this exergy was destroyed; all that remains is the exergy that the entire system possesses in relation to its surroundings .

Examples of exergetic losses are:

The exergy concept provides a tool with which, on the one hand, the maximum useful work of a system or material flow can be calculated. On the other hand, actual losses can be calculated. It can be of help for engineering problems , especially if the exergy concept is linked to economic variables, cf. using thermo-economic methods. Together with the concept of anergy, the two main principles of thermodynamics can also be summarized as follows:

In the literature one often reads the general connection:

where anergy denotes the unusable part of the energy.

Internal exergy of a closed system

The mass-specific internal exergy of a closed system can be determined as follows:

The index  0 characterizes the state of the system or material flow at ambient pressure and ambient temperature in thermodynamic equilibrium.

The absolute value results from the multiplication of the specific value with the mass  m of the system:

Exergy of a material flow

For the exergy of a material flow can be written:

The point above the respective size denotes a current or a time derivative , e.g. B. the mass flow

Exergy of a heat flow

The exergy of a system can change through the exergy destruction in the system and in the open system additionally through exergy flows that are connected with material and energy flows across the system boundary.

Therefore the exergy balance equation for a closed system reads:

and for an open system:

The exergy destruction is caused by irreversibilities during the process. The connection between it and the generation of entropy is

Difference between exergy and free enthalpy

Exergy is not to be confused with the free enthalpy  G.

The free enthalpy is only a function of state that describes the state of a substance with a certain composition at a given temperature and pressure. However, it depends not on the parameters of the environment such as ambient temperature, pressure and - wet from. 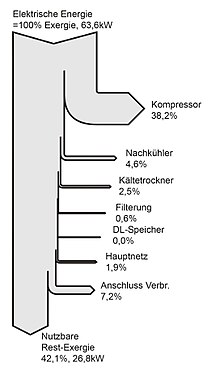 In compressed air technology and pneumatics - just as in other technical disciplines - there is a need to qualitatively assess system parts and components by z. B. Energy losses and efficiencies are given.

To describe the current state of the compressed air at a certain point in the system, it initially seems plausible to use the thermodynamic values ​​of the internal energy  U (closed system) or the enthalpy  H (open system). Although both quantities correctly map the energy content, no statement can be made about the usability of this energy, since the energy gradient against the environment is not taken into account in both quantities. This can also be seen in the fact that both  U and  H are only functions of temperature; however, the pressure in the current state has no effect.

However, since pressure is relevant as the driving factor for performing mechanical work, especially in pneumatics, it is hardly possible to make any statements about the benefit of the energy content with  U and  H. This is where exergy comes into play, which describes the usable portion of the energy content.

The use of exergy as a balance parameter provides a remedy. To calculate the exergy content in state  a from measurable quantities, the following three values ​​are required:

With this information (index  0 denotes the environmental condition) the exergetic power of the compressed air flow is calculated as:

The exergy analysis enables all important events in the chain of effects to be recorded:

A graphical representation of the losses can be done, for example, in the form of a Sankey diagram (figure on the right). The exergetic analysis of energy flows offers a clear and comprehensible method to evaluate compressed air systems qualitatively, to show losses and to create a comparison basis for the evaluation of systems and system parts.

Example: Calculating the exergy in a bicycle tire

A bicycle tire should be inflated with a hand pump according to the sketch opposite, starting from an external pressure of 1 bar to 4 bar. The minimum work required for this must be determined. This minimum work corresponds to the exergy contained in the tire after inflation. In a reversible process, the losses are zero and the work to be done is minimal. This means that isothermal compression must be assumed, i.e. a process that is theoretically frictionless and takes an infinitely long time in order to avoid heating. To calculate the pumping work, a piston volume of three times the hose volume is assumed, which can perform the compression process with a single stroke. Then the entire mass of the gas in ambient conditions is already contained in the tire plus pump system at the beginning . With the piston stroke, the total volume is now compressed to the volume of the tire. An isothermal process can take place without friction and with (infinitely) much time. H. without losses.

Calculation of the volume or the mass

Volume change work along the isotherm:

Shift work through the atmosphere:

Compressor work by the pump:

Calculating the exergy E x using the equation for the closed system leads to the same result:

The real work to be done is because of the finite time to compress, the air heats up and consequently a higher back pressure has to be overcome, and due to friction losses in the valve and on the piston, especially due to the dead space in the pump; it can be twice as much.