The bumper has been an integral part of a vehicle since the early years of the automobile . It is mounted on the front and rear. The first automobiles with bumpers were built by Frederick R. Simms in 1905 .

Round bumper on a Belgian Minerva Type AK from 1928

In the past, a cross bar, usually made of steel, was attached to two brackets that were connected to the frame of the vehicle. In the event of an impact, the rod bent and when deformed it absorbed the energy of the impact. Due to the fixed connection to the chassis , a vehicle could be towed by the bumper.

Until the late 1920s, bumpers were an accessory that had to be ordered separately; rear ones came into use later. They were often in two parts to leave room for the spare wheel attached in between . Early bumpers consisted of a simple piece of round steel that was usually painted or nickel-plated in the same color as the chassis and often had a nickel-plated sleeve at the ends. Later these actual "bumpers" became increasingly flatter steel parts ("leaves") that were increasingly nickel-plated or chrome-plated . The first production car with chrome instead of nickel trim came from Buick in 1926.

Because of the different sizes of the vehicles, these bumpers offered limited protection. There were times when the bar of a larger vehicle would slip over that of a smaller one. This resulted in much greater damage. That is why there was a move towards widening bumper leaves or guiding them twice, i.e. arranging two leaves on top of each other. Additional protection was provided by horns and overriders , which were supposed to prevent the bumpers from getting "hooked", which could happen in minor collisions. At the same time, the bumper became a design element and often a distinctive feature of the brand.

The fundamental disadvantages of all these systems were that shocks penetrated the vehicle frame practically unhindered and shifted it. More importantly, they increased the risk of injury to pedestrians and cyclists; in particular, the forces introduced easily lead to fractures of the lower leg. Over time, more angular and pointed forms of the bumper emerged, which entailed additional risks for cuts.

In the 1970s, the energy-absorbing bumper was prescribed first at the front and then also at the rear. These bumpers consist of a steel beam that is encased or expanded with plastic. The assembly on the chassis or the body of self-supporting bodies is carried out with a bumper on each side, which should absorb the energy in the event of a light impact.

A special form of the bumper is the much more massive ram protection , which is also attached to the chassis and partially also protects the front underbody. The ram protection originally served to protect the body or parts of it in off-road vehicles for expeditions, military, agriculture and forestry or rallies . Because of its sturdy construction, it is sometimes used to attach pulling winches . The ramming protection, also popularly known as the “bull catcher”, is often installed as an attachment on vehicles that are never moved off-road for optical reasons. Off-road vehicles equipped in this way pose a potentially greater risk to other road users in normal road traffic. They are therefore prohibited in some countries such as Switzerland . 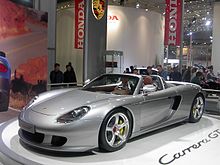 Since around the mid-1990s, the bumper has been surrounded by a plastic skin, the apron . This is incorporated into the design of the vehicle. In addition to the bumper, it may hide other technology (e.g. distance sensors ). Due to the closed shape, the apron can improve the aerodynamics of a vehicle.

By using “thinking” plastics and defined predetermined breaking points , it is possible to control how energy should be absorbed. For example, the crumpled plastic of the apron returns to its original state (“reversible bumpers”) in the event of small parking bumps (up to about 7 km / h). Sometimes it is also possible that the plastic outer skin returns to its original shape, although the crumple bodies underneath have been permanently deformed. These must then be replaced because the vehicle is no longer roadworthy.

Bumpers designed more recently are primarily intended to help minimize injuries to pedestrians or cyclists. These new safety systems increasingly include the design of the front of the vehicle and the hood is also included. The bumpers used here are made from energy-absorbing foams. These semi-rigid foams dampen the impact of an impacting body even in a small layer thickness and allow bumper systems to be developed that meet strict safety requirements. In the event of accidents at high speeds, the foam shells under the apron absorb the energy and thus distribute it over a large area.