This article describes the Camargue countryside in the south of France . For more meanings, see Camargue (disambiguation) .

The Camargue is, depending on the definition, about 600 km², 930 km² or 1500 km² large alluvial plain ( marshland ) in Provence (more precisely in Basse-Provence ) in the south of France . According to the narrower definition, it is only the area bounded by the two arms of the mouth of the Rhone in the Rhône Delta , then the Camargue would be in the Rhone Delta, or it also includes more or less large areas to the west and east of it, then the Rhone Delta would be in the Camargue.

The Camargue as a landscape unit, French: Plaine de la Camargue , must not be confused with the Camargue Regional Nature Park ( French: Parc naturel régional de Camargue ). The Plaine de la Camargue or Grande Camargue is bounded by the two arms of the Rhône. From the center to the south, where little river sediments have reached, it is divided into small peninsulas and islands by numerous lagoons, the largest of which is called Étang de Vaccarès .

In an extended definition (e.g. in French Wikipedia), the Little Camargue west of the delta is added and a strip of land on the east bank of the Great Rhone ( le Grand Rhône ) with the Plan du Bourg and the Marais du Viguerat marshland . Towards the arms of the Rhône, the Camargue is completely surrounded by dikes, which means that the floods that used to be common and that contributed to the formation of the landscape no longer occur. This results in some problems with the salinisation of the soil. The flora in the southern Camargue, where there is no longer any agricultural use, is determined by plants that can cope with brackish water , such as reeds , tamarisk and samphire ( salicorne ). It belongs almost entirely to the municipality of Arles , which has made Arles the largest municipality in France in terms of area.

Most of the Camargue is used for agriculture , growing vegetables , fruit and rice, as well as for raising livestock . Since the Second World War , rice has been grown on areas that were previously covered with reed beds . The soil, which consists mainly of alluvial land , offers favorable conditions for this. To the south of Salin-de-Giraud , almost the entire area is occupied by saltwater salines , which formed the Association of Salins-du-Midi as early as 1856 . This saltworks was closed for economic reasons, but this destroyed the water management in this area. Therefore, salt is still extracted today with a residual operation in order to keep the water management in tact. This is also known for the production of the Fleur de Sel . 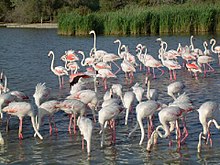 Flamingos in the Camargue

The Camargue is best known as a nature reserve . While almost the entire Camargue (in the German sense) is a protected landscape area (1970: Camargue Regional Nature Park , 86,300 ha), the nature reserve (1927: réserve naturelle nationale , 13,117 ha) consists only of the Étang de Vaccarès and the strip to the sea to the south of it . The nature reserve is home to a world of water birds rich in 400 species (e.g. large flamingo ). The Étang de Vaccarès is the largest of the numerous very shallow lakes (French étang ) that characterize the landscape typical of the Camargue.

Tourist attractions are the wild herds of the white Camargue horses , a horse breed only found here, as well as the sometimes very large herds of Camargue bulls. These are used in the largely bloodless bullfights in the arenas of Provence. Their meat (French taureau , also toro ) is a specialty of Provencal cuisine. Horses and bulls live in the open air, but they have owners and are branded accordingly; so they are not wild animals.

You can get an overview of the fauna of the Camargue in the Musée de la Camargue on the road from Arles to Les Saintes-Maries-de-la-Mer, or at the La Capelière observation station on the east bank of the Étang de Vaccarès. There you can observe birds and other wild animals in hidden shelters, as long as the season and the climate have not dried up the shallow ponds.

The research station "Station biologique de la Tour du Valat", founded in 1954 by Luc Hoffmann , is a research institute for nature reserves in the Mediterranean with an ornithological focus. The nature reserve and adjacent protected areas have been on France's list of proposed UNESCO World Heritage sites since 2002 .

The marshland of the Camargue was hardly populated in ancient and medieval times; Shepherds sometimes grazed sheep and goats there. The possibilities for agricultural use of the soil were only recognized in the 19th century; Canals were dug and drained the plains. You can find out more about the sometimes very miserable living conditions of cattle herders in ancient times and other cultural aspects of the Camargue in the Museon Arlaten in Arles (currently closed for renovation, planned reopening: 2019). The shepherds had to live in the cabanes , small thatched sheds that you can still see here and there today.

In addition to the fortress town of Aigues-Mortes (approx. 8,500 inhabitants), which was expanded by Louis the Saint on the occasion of the planning for the 6th crusade in the middle of the 13th century , the pilgrimage site of Saintes-Maries-de-la-Mer (approx. the largest city in the Camargue. Here is an old church, the founding history of which goes back to the 9th century, but which was only converted into an imposing fortified church in the 14th century against attacks by Moorish pirates ; this supposedly holds the relics of St. Maria Jakobäa and St. Maria Salome . There is also a theater and three smaller museums.