The Ami 6 is a small sedan made by the French car manufacturer Citroën .

The Ami 6 was presented to journalists on April 24, 1961. The controversial design came from Flaminio Bertoni . Ami means friend in German. “L'Ami Six”, in German “der Freund 6”, sounds like “la Missis” in French, and in German: the Fräulein. The copies made in the Citroën plant in Vigo (Spain) were sold in Spain as "Citroën Dynam" for trademark reasons.

In the 1950s, the French car manufacturer Citroën had two big bestsellers in its vehicle range: the D models as a revolutionary luxury class - sedan and at the other end of the scale the French people's Spartan car, the 2CV . What was missing, however, was a mid-range car. It was therefore decided in the mid-1950s to close this gap.

The specifications from General Director Pierre Bercot to the body department were difficult to implement: a large trunk, optimal use of space and comfort for all passengers , the length of the vehicle did not exceed four meters - and all of this without constructing a station wagon .

After a series of drafts of the M (M = middle class) project, some were based on a "stripped-down" DS with hydropneumatics (prototype C-60), but the price that was aimed at did not allow for the expensive suspension. Therefore, it was decided to develop a vehicle based on the platform and mechanics of the 2CV . The revolutionary independent suspension of the front and rear wheels on swing arms with a longitudinal spring element was adopted in principle, but adapted for the now heavier and larger car. An automobile factory was set up in Rennes especially for this and future models. 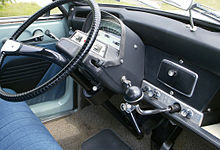 The air-cooled two-cylinder boxer engine based on the 2CV was increased to 602 cm³ with 14 kW (22 SAE-PS / 19.5  DIN -PS) for the Ami 6  . It was noteworthy that the engine, with the performance of a small car, was able to accelerate the mid-range structure of the Ami 6 to 105 km / h. Part of this was due to the well thought-out construction, which resulted in a vehicle weight of only 610 kg, which resulted in a favorable power-to-weight ratio . The centrifugal clutch of the 2CV was modified according to the stronger performance. The interior was stylistically based on that of the Citroën DS .

The factory responded to the initial criticism in September 1961 and gave the Ami 6 rear sliding windows and a trunk lid that could be opened from the outside - until then, the trunk was opened using a cable on the rear bench seat.

In November 1964, the Ami 6 station wagon with the traditional name Break followed .

In early 1968 the engine was reinforced again. With the same displacement, it now developed 32 hp (24 kW) with a higher compression and a register carburetor.

Despite the initial criticism of its appearance, the Ami 6 was a complete success thanks to its "sensible" concept - in 1966 the Ami 6 was the best-selling automobile in France.