Double wishbone axle on a Saab racing car from the 1960s. The two wishbones are attached above and below the steering knuckle ; the tie rod through which the steering movement is transmitted to the wheel can be seen in the foreground . The spring (left) is attached to the lower wishbone.

The independent suspension is a type of wheel control in which the two opposite wheels of multi-lane road vehicles can deflect independently of one another. It is a mechanism with a degree of freedom f = 1.

The independence of the wheel positions and the low unsprung mass are advantages compared to joint wheel guidance using a rigid axle .

The oldest known application of an independent suspension is that on the front axle of the l'Obéissante, a steam bus from Amédée Bollée (1873). In 1897 Joseph Guédon and Gustave Cornilleau built a Voiturette with individually suspended front wheels. The automobiles built by Decauville from 1898 onwards also had independent wheel suspension, which worked as follows: A vertical pin was attached to the steering knuckle , which could rotate and move up and down in a socket attached to the chassis and was supported on a transverse leaf spring. This design was also used by Sizaire-Naudin from 1906. With Morgan (from 1909) the pin was fixed and a (coil-sprung) sleeve moved with the steering knuckle. From 1922 there was a similar design from Lancia in the Lambda . In 1920 Karl Slevogt developed a front "swing axle", similar to the Decauville, with a movable pivot, but with a leaf spring at the bottom, which was installed in all Apollo automobiles from 1921 onwards . Edmund Rumpler's Teardrop Car with pendulum axles (swing axles) was created in 1921. From the 1930s, the front suspension on double wishbones prevailed (sometimes a transverse leaf spring took over the function of one of the two links on each front wheel). The suspension on longitudinal swing arms is also known from this time. ( André Dubonnet ) The wheel-guiding suspension strut invented by Earle S. MacPherson was available from 1950 and is today the most frequently used independent wheel suspension on the front axle. In 1982 the "multi-link axle" with five links came up, which is used in different designs and under different names ("multi-link axle", "five-link axle" or "four-link axle" with two combined links).

Types on the front axle 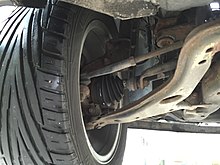 Suspensions with handlebars are:

Suspensions where the steering knuckle is directly hinged to the chassis:

Types on the rear axle 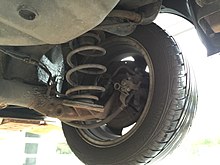 Various designs were or are in use:

Suspensions where the steering knuckle is directly hinged to the chassis:

The suspension on handlebars: