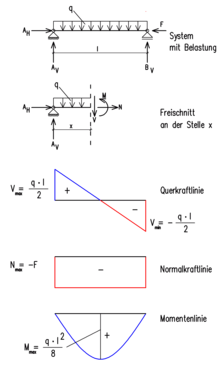 The interface reactions are the cutting principle to be applied to the cut surfaces forces (so-called cutting forces ) and moments (so-called internal moments ). From these, the stresses in the imaginary cut surface (or in the undivided body at this point), which are the basis of strength and deformation studies , can be determined.

The internal forces in a solid rod-shaped component in a plane force system are:

If the rod-shaped component is in a spatial force system, the transverse force is represented with two components in an advantageous right-angled coordinate system (x-axis equals rod axis). The moment then has three components, two bending moments and a torsional moment rotating in the rod axis .

Application of the cutting principle on a solid, rod-shaped component

Alternatively, any part can be cut out by making two cuts. The cut sizes are then to be entered on both cut surfaces.

Straight rod with two interfaces.
The sectional reactions (forces and moments) shown here by arrows are shown as positive according to the usual sign convention.
The reference fiber is shown as a dashed line.

Section reactions in the plane

The position of the local rod axis coordinate system is defined by the dashed fiber ( reference fiber ). It defines the direction and origin of the x, y and z axes as well as the position of the y and z axes. According to the usual convention : The z-axis points towards the dashed side. The x-axis is the member axis. The y-axis points out of the plane to the viewer. This results in a Cartesian right coordinate system .

All cutting reactions are vector quantities . This means that every force has a direction and every moment rotates either clockwise or counterclockwise.

A rod or a more complex object can also be cut free in a joint. The following applies:

The lateral reaction force and the bending moment appear in the Cartesian coordinate system as two components each. The reaction moment contains a third component, namely one that rotates around the x-axis ( torsion moment , notations are M x , M T or T).

If you move the imaginary interface along the component, the cutting reactions change. The sectional reactions shown in a diagram as a function of the interface location (coordinate x, see picture in the introduction ) are called state lines, since the sectional reactions correspond to the internal state ( mechanical stresses ) existing at this point . The points of greatest stress in a beam with a constant cross-section are clearly visible in the condition lines.

Construction of the #influence lines on which the bending moment (m) and the shear force (q) at point C of the single-span girder under a single load P that can be shifted right-left can be read. The length c represents the value of P. The value of m and q is read off at the point below the force P marked accordingly in the diagram. However, this value applies to the internal forces at point C.

A portable load are z. B. Subjects to bridges by a vehicle rolling over them. We are interested in the influence of the variable point of the load on the stress on the bridge at a certain point, which is expressed by the size of the cutting reactions at an imaginary cut there.

There are several options for calculating cutting reactions. The equilibrium conditions must be observed for all of them. A general distinction is made between:

The force corner can be solved arithmetically or graphically.

With these equilibrium conditions, equations are created that make it possible to calculate the missing forces or moments. An intelligent selection of the sections (e.g. so that only one unknown quantity appears in an equation) can often reduce the computational effort, but this is not always possible.

The exact equations are given below.

Note: The index "A" in the moment equation indicates that the sum of the moments around a fictitious pivot point "A" is being considered here.

The points "A1", "A2", "A3" may also be identical, but also provide new linearly independent equations, since they consider the torques about a different axis. Alternatively, z. B. one also set up six moment equilibrium conditions, but here one must choose different points.

With this approach, differential equations that meet the equilibrium conditions are set up for the required internal forces and then solved with boundary conditions that match the system (for example: no torque transfer at a bearing at position x = 0).

In the shear-soft beam theory of the second order there are the following differential equations for the transverse components under Bernoulli's assumptions :