Chain drives are traction drives . They transmit torsional forces with a fixed or changeable transmission ratio via a chain . They usually work with sprockets and are classed as form-fit gears . Non-positive designs are rare, as are push chain drives .

An arrangement of drive and driven gear with a revolving chain is called a chain drive . Chain gears with gear ratios that can be changed in steps are used, for example, in bicycles with derailleur gears , but also earlier in some motorcycle models designed by Richard Küchen . Multi- disc chain transmissions are continuously variable transmissions . The sizes of the chains are standardized, their dimensions are given in inches .

Drive chains on motorcycles run more efficiently than cardan shafts when they are in perfect condition. They are often designed as an O-ring chain for reliable lubrication . 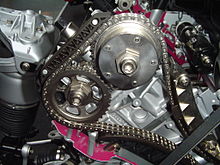 Chain to the camshaft drive

Truck from the 1920s with a chain to transmit power to the rear wheels.

Positive chain drives are the most common embodiment. The so-called roller chain is mainly used as the drive chain . The inner plates are pressed onto the bushings, which increases the wear resistance. To reduce noise and wear, hardened and ground rollers are stored on the bushes. While a certain amount of slippage always occurs with force-fit transmission of motion (e.g. belt or rope drive) , the drive and output shafts always move completely synchronously with one another in a chain drive. In the automotive - technique , therefore, is the camshaft , which is always at a fixed angle relative to the crankshaft must be, usually via a chain or toothed belt driven.

Comparison of positive and non-positive gears

Chain transmission of a bicycle

Positive chain drives are also used in bicycles . There the bicycle chain has prevailed over all other power transmissions (cardan shaft, etc.). A disadvantage of the power transmission through the chain is the fact that the translation cannot be selected continuously. In cycling , this has led to the fact that chain gears have been in demand in the last few decades, especially with single-step gear sets, which are now offered in a large selection by retailers due to the technical development of chains and sprockets (9- and 10-speed cassettes, since 2008 also 11 times).

So-called link chain drives are used for power transmission without a form fit. As a rule, they work in a non-positive manner and are therefore not assigned to the chain drives, but rather follow the working principle of belt drives .

As an exception, positive-locking lamella chain drives are to be mentioned, such as B. the continuously variable PIV gearbox, in which a chain with laterally displaceable plates engages in the radial groove teeth of two pairs of conical pulleys. Tooth and gap of a pair of disks face each other.

In motor vehicles, chain transmissions have also been used as four-speed change transmissions. The best-known examples of this are the motorcycle gearboxes from Richard Küchen in the types Zündapp KS 601 (and KS 600) and Victoria Bergmeister .

There are also chain gears with continuously variable transmission, in which a lamellar chain runs between two pulleys with conical flanks on the drive and output sides.

The PIV-Gear Positive Infinitely Variable is a lamellar chain gear with a chain, the laterally movable lamellas have a form fit with two grooved blunt cone pulleys.

The multitronic from Audi works with smooth conical pulleys and a link chain with rocker joints. The hinge pins protrude laterally and transfer the chain force through friction (non-positive) to the discs.

By changing the distance between the conical disks, the translation can be adjusted; one of the conical disks is fixed, while the other can be moved. They are adjusted mechanically or hydraulically. The oil pressure in the hydraulic system is regulated depending on the torque in such a way that the chain does not slip, otherwise the transmission could be destroyed.

Such gears have been used in machine tools and other industrial drives. Recently , there have been more and more converter- controlled electric drives instead .

As an automatic transmission in passenger cars, continuously variable chain transmissions enable driving without shifting jerks. Their main disadvantage is the low level of efficiency, which is around 60% between the engine and the tire; with a gear shift transmission it is around 85%. There are no longer any new vehicles with these drives on the market.

The wear limit of drive chains is often set at a chain elongation of approx. 2%. An uneven and unsafe run of longer chains can no longer be compensated for even with tensioning elements.

If a uniform wear of the sprocket emphasis of all teeth, Link count and number of teeth should be relatively prime to be, grab that's not regularly same bolt in the same tooth gaps. However, it can be argued that sprockets with an even number of teeth are subject to less wear if it can be ensured that the inner and outer link plates of the chain come to rest on the same teeth after disassembly. In contrast to the distance between the chain pins on an outer plate, the distance between the pins on an inner plate does not change despite increasing wear. If the above conditions are met, increased wear will only occur on every second tooth.