A converter , also known as AC inverter and on the basis of the English term as AC / AC converter called, is a power converter , which consists of a AC one in the frequency and amplitude generates different AC voltage. Converters are not to be confused with transformers , which can only change the amplitude but not the frequency of the voltage.

If the conversion is used for the direct supply of an electrical machine such as a three-phase motor in the context of electrical drive technology and the frequency is derived from the condition of the motor, the converter is specifically referred to as a frequency converter . It then includes additional functions for motor control, such as speed measurement and commutation processes to adapt the rotating field depending on the current state of the machine.

There are different topologies of inverters, as shown in the diagram opposite as an overview. The most important types are the indirect converters, which work with an intermediate circuit operated with DC voltage and which in principle represent a combination of rectifier and inverter . There are also direct converters, also known as matrix converters, that do not require a DC link. The main topologies are divided into various subgroups for specific areas of application.

In terms of performance, a distinction is made between partial and full converters . A partial converter is only designed for the slip power to be controlled (up to a maximum of 30%); a full converter controls the full power of the drive machine or generator. Partial converters are often found in connection with double-fed asynchronous generators on wind turbines .

The most important circuit principles for converters are shown below.

Indirect converters with DC voltage in the intermediate circuit , English Voltage Source Inverter (VSI), consist of a three-phase rectifier (on the left in the figures), a DC voltage circuit in which the DC voltage on the capacitor C as an energy store in the intermediate circuit is almost constant, and an output-side Inverter (in the pictures on the right). The control electronics required to control the electronic switches are omitted from the figures for the sake of clarity.

The bipolar transistors with insulated gate electrode (IGBT) as electronic switches shown in the simplified circuit diagrams can also be replaced by other electronic switches such as thyristors , depending on the application . At high voltages of a few 100 kV, the switches are connected in series and combined into so-called thyristor towers . This is common for higher outputs of up to a few 100 MW with direct current short couplings , which are a form of large converters between two alternating voltage networks with different network frequencies . 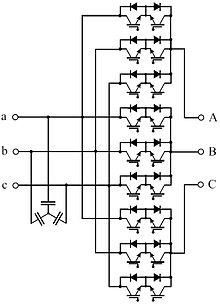 Basic circuit of a direct converter

Direct converter topologies, also referred to as matrix converters, are used when high energy densities are required, such as with a compact converter . The structure of the matrix converters cannot be broken down into individual modules such as rectifiers or inverters and converts the voltage and frequency in one stage, a matrix.

The matrix in the three-phase system, as shown in the simplified circuit diagram on the right, consists of three paths per phase, which makes it possible to connect each output phase, designated with the capital letters A , B and C, to one of the input phases a , b or c . The series connection of two IGBTs per path is necessary in order to be able to switch both positive and negative half oscillations. Due to the control circuit, which is not shown here for the sake of clarity, in this converter certain time segments of the input voltages are switched to the output in such a way that a changed frequency results. The discontinuous transitions in the area of ​​the switchover times are expressed in harmonics that are dampened by additional harmonic filters .

Another circuit variant of a direct converter, which is used in particular as a frequency converter for controlling larger three-phase motors, is the cyclo converter . As a special feature of the cyclo-converter, the output frequency is always lower than the input frequency if thyristors are used as switching elements, which can be switched on at any point in time, but only switched off at a zero crossing .

"Static" converters based on semiconductors are increasingly being replaced by "rotating" converters.