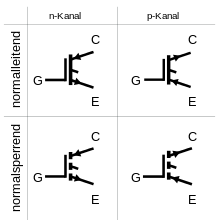 There are four different basic types of IGBTs, which are represented by four different circuit symbols. Depending on the doping of the base material, n- and p-channel IGBTs can be produced. These are divided into a self-conducting and a self-locking type. This property can be selected during the manufacturing process. In the circuit symbols for self-conducting IGBTs, also known as the depletion type, a solid line is drawn between the collector (C) and emitter (E) connections. This line is shown broken in the self-locking types, also called enrichment type. The gate connection (G) serves as a control connection for all types.

One of the developers of the IGBT was B. Jayant Baliga at General Electric .

Equivalent circuit diagram of an IGBT

IGBTs are a further development of the vertical power MOSFET . The figure shows a vertical section through an n-channel IGBT.

The IGBT is a four-layer semiconductor component that is controlled by means of a gate. It has a mostly homogeneous, highly doped p-substrate (n-channel IGBT) with a specially designed pn junction on the back. A lightly doped n- epitaxial layer is applied to the carrier material and then the p- cathode wells (sometimes highly doped) and highly doped n-islands are introduced by diffusion . This creates an n + pnp + structure for an n-channel IGBT. P-channel IGBTs accordingly have a p + npn + structure.

The pn junction and the gate are responsible for the function of the IGBT. A Darlington circuit is created from an n-channel FET and a pnp transistor.

A positive potential is applied to the collector (in relation to the emitter ) so that the transition on the rear side is in forward mode and not in inverse blocking mode. The forward operation can be divided into two areas: a blocking and a pass band.

As long as the threshold voltage (gate-emitter voltage, U GE ) of the FET is not reached, the IGBT is in blocking mode. If the voltage U GE is increased, the IGBT enters the pass band. As with normal MIS field effect transistors, a conductive n-channel is formed below the gate in the p-cathode well. This enables electrons to be transported from the emitter into the epitaxial layer. Since the rear pn junction is switched in the forward direction, holes are injected into the epitaxial layer from the p + substrate, creating an electron-hole plasma that provides the actual conduction. This plasma has to be built up or broken down with each switching process, which results in higher switching losses than with power MOSFETs. When this plasma is broken down, the IGBT may switch through again for a short time.

As can be seen in the figure, the four-layer semiconductor arrangement harbors the risk of a parasitic thyristor , which is formed from the pnp transistor and a parasitic npn transistor. Similar to CMOS circuits, so-called latch-up effects can occur with IGBTs . In other words, the thyristor ignites and a current flows that cannot be controlled via the gate. 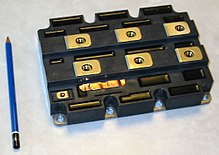 IGBT module (IGBTs and free-wheeling diodes) with a nominal current of 1200 A and a maximum voltage of 3300 V.

The disadvantage are the large switching losses compared to power MOSFETs, especially when switching off (current tail).

The distinctive advantages of IGBTs are the high voltage and current limits: voltages of up to 6500 V and currents of up to 3600 A, with an output of up to 100 MW. The maximum frequency limited by the switching losses is around 200 kHz.

IGBTs are used, among other things, in the high-performance area because they have a high forward reverse voltage (currently up to 6600 V) and can switch high currents (up to around 3000  A ). In drive technology (e.g. in locomotive construction) they are now largely replacing the previously common circuits with GTO thyristors in pulse inverters for three-phase machines .

Areas of application include a .: