The Darlington Circuit was invented by Sidney Darlington in 1952 at Bell Laboratories . Darlington patented the idea of ​​building and linking two or three similar transistors on one chip , but not the use of any number of or complementary transistors, so that integrated circuits were not affected by this patent.

Compared to small-signal transistors , power transistors have a significantly lower current gain B (5-10 compared to 100-1000 for small-signal transistors) and therefore require high control currents, which can be reduced accordingly by the Darlington arrangement. Therefore, one of the most important applications is the switching on or off of a current with a significantly higher power by a control current of lower power.

Another application is in the amplification of analog signals. The reason is that the control currents there are too low to control the power transistors directly. Furthermore, the temperature dependency and thus the setting of the operating point in Darlington transistors is relatively uncritical; Due to a resistor between the base and emitter of the power transistor, the quiescent current between 0.7 V and 1.1 V is approximately linear. This avoids distortion.

The advantage of this technology is that, with the same space requirement, a considerably higher current gain can be achieved or the necessary control currents are lower. The total gain B ( large signal ) corresponds roughly to the product of the gains of the two individual transistors ( B 1 and B 2 ):

In modern power Darlington circuits, the current gain is in the range of 1000 and higher. For the small-signal current amplification, amplification factors of up to 50,000 are achieved.

On the other hand, the greater phase shift compared to a single transistor is disadvantageous , so that instabilities tend to occur in the case of negative feedback . For this reason, among other things, Darlingtons are usually not suitable for high-frequency applications.

Darlington transistors have slower switching times than single transistors, especially when switching off the collector current, because the first transistor is not able to "clear" the charge carriers from the base of the second transistor. In order to improve the switching behavior, a resistor is integrated parallel to the base-emitter path of the power transistor. However, part of the base current for the second stage flows through this resistor, which reduces the overall gain accordingly.

Finally, the base-emitter voltage of the Darlington doubles compared to the single transistor (about 1.2 to 1.4  volts for a silicon Darlington). The collector-emitter voltage in the conductive state also increases by the forward voltage of the base-emitter path of the second transistor, i.e. about 0.9 volts for small-signal types (compared to 0.2 volts) or up to over 2 volts for power types. This leads to increased power losses ( ) especially at low voltages. 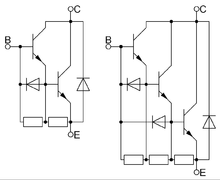 The Darlington circuit can be constructed with both npn and pnp transistors as a power element. In the graphic, resistors are built in parallel to the base-emitter paths of the individual transistors, which, as described above, allow charge to drain from the base. The additional diodes accelerate this even further; if the voltage at the first driver transistor is equal to the emitter voltage of the power transistor, the charge can flow away from all the transistors connected downstream via the diodes. IGBTs ( bipolar transistor with insulated gate electrode ) are also subject to this effect .

Avoid using diodes if the base voltage can drop below the emitter voltage.

The diode between the collector and emitter of the Darlington transistor has a different purpose; As a free-wheeling diode, it is intended to protect the circuit in the event of an inductive load.