Abbreviations from English are often used to denote such gear units:

The term control range corresponds to the spread in the multi-step transmission, i.e. the ratio of the largest to the smallest translation. For CVTs with a link chain , the factor is usually between 5..6 (in automotive engineering up to 8), with a push link belt a little lower and with a plastic V-belt (for example in motor scooters ) around 3. V-belt drives with chains are subject to the polygon effect , which means that the ratio is not constant, vibrations are superimposed on it, the frequency of which depends on the chain pitch. This is noticeable by a whistling operating noise. With the Audi Multitronic, the pitch of the rocker joint chain is variable, the different lengths of the links are randomly distributed in the chain to suppress the whistling. 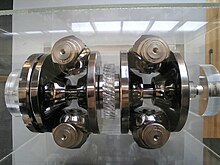 With continuously variable transmissions, the ratio of the speeds of the driving and driven shafts , the translation , can be changed continuously within a certain range. This can also mean a standstill (IVT) or the reversal of the direction of rotation of a shaft.

The torque transmission in a continuously variable mechanical transmission is usually frictional. Exception is the form-fitting working chain transmission according to Abott, known under the brand name PIV transmission , the force transmits a chain with transverse, laterally movable laminations, which is in constant engagement with two radially slotted conical discs. The grooves become steadily narrower towards the center of the conical disks. The pitch of the teeth formed by the thin lamellae adapts to the inclined flanks of the teeth on the conical discs.

There are different types of gears with frictional engagement: V-belt gears and rolling element gears, these are friction gears with movable wheels, in which in the simplest case the contact surface can be moved along the radius of one wheel. In toroidal gears, the friction surfaces are part of the surface of a torus . The input and output gears face each other and are connected to one another via planetary rollers. To change the gear ratio, the rollers are swiveled so that they run further in on the fast side and further out on the slow side.

The continuously variable transmissions developed for vehicles are mainly implemented via frictional couplings, which are characterized by so-called slip . There are essentially two reasons for this slippage:

The use of friction-locked continuously variable transmissions is limited by several factors:

In addition to mechanical continuously variable transmissions, there are other solutions:

The central element for power transmission in a traction mechanism is the variator. It consists of two axially displaceable pairs of conical pulleys and a traction device running between them.

Play media file
V-belt variator of a combine harvester. The driving speed can be continuously adjusted by hydraulically compressing or pushing apart the conical discs

The belt of the conical pulley pairs optionally consists of:

The main difference between the versions is:

One pair of conical disks is connected to the drive, the other to the output. A diagonally opposite half of the cone pulley pairs is fixed on the shafts, while the other pulley on the shaft can be axially guided and moved in a controlled manner.

One example is modern continuously variable transmissions in tractors, such as the Vario transmission from the tractor manufacturer Fendt . A planetary gear serves as a power switch and divides the power of the drive motor into the drive of the wheels and that of an infinitely variable hydraulic pump . In the hydrostatic part of the transmission is the energy of the hydraulic fluid two likewise continuously variable hydraulic motors supplied and is available to the drive wheels of the available again. The transmission ratio is regulated via the hydrostatic branch. The power split results in a further advantage: The power share of the stepless (hydrostatic) power branch can be kept low in most operating points, which means that its poorer efficiency is not so important.

The transmission (power split device) of the hybrid vehicle Toyota Prius has a similar structure, with the stepless part consisting of an electric transmission (generator and electric motor). The system is marketed by Toyota under the name Hybrid Synergy Drive . 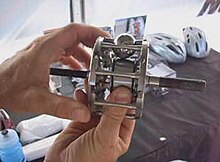 Its basic principle was already described by Leonardo da Vinci . The name NuVinci (new) is derived from it. It is a stepless planetary gear with frictional engagement between balls and conical surfaces. By tilting the axles that lead through the balls and are mounted in the gear frame, they roll with differently large radii on the edges of the laterally arranged disks, which results in a differently large transmission ratio. 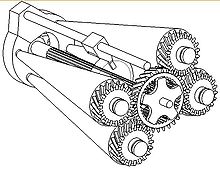 The so-called X-CONI gearboxes are based on the function of the bevel ring gearboxes , but can transmit more torque. As a rule, they are designed to be coaxially and functionally split and are well suited for rear-wheel drive vehicles. The basic principle is a concentric arrangement of almost all components in the transmission. After the starting element (clutch, torque converter, etc.) the force flows to the planet carrier. One part goes to the output shaft with sun gear, the other part to a ring gear with internal and external teeth. The ring gear drives the cones, which are oriented as outer planets. These are inclined by half the cone angle and thus form a cylinder in which the “center drive” - the transmission wheel - can be moved in translation on the output shaft via a displacement unit. The contact pressure required for the toroidal transmission is generated by the cones themselves. In order to be able to transmit a high torque, it is also possible to separate the traction area and the lubrication area.

Rear view of a HexaCONI gearbox

The QuattroCONI (4 cones) or HexaCONI (6 cones) versions make sense, but a different number of cones from two upwards is also conceivable, for example as a modular design for different capacities.

If the highest torque transmission is required, for example for commercial vehicles, the Duo-X-CONI version, in which a second set of cones is connected downstream, is ideal.

In mechanical engineering , especially in machine tools , the continuously variable transmission with lamellar chain (a brand name: " PIV " ) was widespread before the widespread introduction of electronically controllable motors .

Continuously variable transmissions were also used in vehicle construction. They first became known to the general public as Variomatic in vehicles from DAF , which could drive forwards and backwards at the same speed. The French moped manufacturer Motobécane began developing a stepless power transmission as early as the late 1940s and manufactured the resulting Mobymatic type in the 1950s . The centrifugal clutch was driven by the rear wheel here. A frictional connection only came about from a speed of about 7 km / h, to which the vehicle had to be accelerated with muscle power beforehand. From 1954 to 1957, DKW built the DKW Hobby scooter with a continuously variable belt drive ( Uher system ) in an edition of 45,303 units. In contrast to the Mobymatic type, with the Uher system, the driving speed was determined solely by the engine speed, which caused problems when driving up inclines. Since the 1980s, small motorcycles ( mopeds / mopeds ) have been manufactured in large series by Honda (for example in the Mofa Camino ) and the Italian manufacturer Piaggio (for example in the Hexagon) with a continuously variable V-belt transmission and a centrifugal clutch . In 1987 the automobile manufacturer Subaru brought the Justy small car with an electronically controlled continuously variable transmission called ECVT onto the market. In the same year, Ford introduced the continuously variable CTX automatic transmission for the second series of the Fiesta . The Fiat Group used these transmissions in the automatic versions of the Fiat Panda I (141A), Uno , Punto I , Tipo and Lancia Y10 and Lancia Y under the names Selecta and Selectronic.

In the meantime, continuously variable transmissions can be found, for example, in the drives of motor scooters and also in passenger cars up to 191 kW (260 hp) ( e.g. Audi - Multitronic ) with chains and up to 350 Nm with push links. Electronics regulate the continuously variable transmission so that the motor is in the best possible operating range:

During acceleration, the motor can deliver its maximum power at constant speed, while the increase in speed is compensated for by the continuously variable transmission. This has the initially irritating effect that if the engine noise remains the same, the speed steadily increases ("rubber band effect").

A variant of the continuously variable transmission as a friction gear with variable-angle rollers is the Nissan Extroid CVT transmission introduced in 1999 . Initially, it was too heavy and too expensive in small motor vehicles because of oversized hydraulics and poor efficiency. However, the technical potential of the rolling and thus extremely quiet, comfortable stepless power transmission became apparent. Another variant with rolling friction transmission is the bevel ring gear.

The compact 3 kg household washing machine Eudora from Gunskirchen , Upper Austria. was manufactured from around 1960 with an automatic spin mechanism instead of hand lever control. The motor is mounted on a rocker so that its weight tensions the V-belt to the large pulley on the washing drum axis, which rotates at around 100 revolutions / min in washing mode. The pair of frustoconical pulleys on the motor axis are axially pressed apart by the belt pull, so that when washing over the smallest possible effective diameter of this drive, only a low belt speed acts on the large output belt pulley. For spin, the asynchronous motor is now operated with fewer poles and thus increases its speed to a good double. As a result, 6 wedge-shaped iron weights are subject to increased centrifugal force , slide a little outwards in smooth plastic guides in the drive and press the rear of the conical pulleys towards the front, whereby the V-belt gradually increases to more than twice the diameter and 550 rpm spin speed (type: Super38 EU442) of the Drum is reached. The variable transmission runs through its entire transmission range within about 5 seconds, while the drum revs up from the washing speed. The engine is raised according to the additional V-belt length required. If a lock is set against this motor lift with a simple rotary lever, almost nothing changes in the diameter of the belt drive and the machine spins gently at about half the speed.

In locomotives and ships , a combination of internal combustion engine, electric generator and electric motor is often used for stepless speed and torque conversion. Diesel-electric propulsion is typical for work and research ships, but large cruise ships are also equipped with it. Because of the high construction costs, this solution could not prevail in cars.

Similar to a hydrostatic continuously variable transmission , however, the transmission efficiency can also be considerably improved here if a power-split design is used. Various designs have been implemented: In the Czech railcars ČSD M 290 (1936), the stator of the generator was rotatable and connected to the wheels via a gearbox, and in the Hybrid Synergy Drive from Toyota for motor vehicles, a planetary gearbox couples motors and generators to the drive.