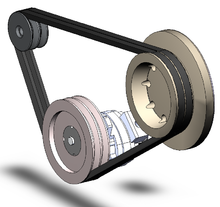 V-belts are drive belts for belt drives . They have a trapezoidal cross-section.

The contact pressure of the flanks of the belt in a wedge-shaped groove is much higher than with a flat surface. The V-belts take advantage of this fact. They are made of rubber with a textile or steel cord insert and are made endless. They can transmit much larger torques than flat belts with the same space requirement . Due to the higher friction, the forces on the bearings are significantly lower. However, the efficiency is somewhat lower than with the flat belt.

You can also arrange several V-belts next to each other. However, since V-belts gradually expand during their use, it is important that all belts are exchanged at the same time in drives with several parallel V-belts.

In practice there are mainly four different types of V-belts used.

The V-belt is probably the best-known representative of the drive belt. It takes place in motor vehicles used for the generator , common (alternator) and the fan and the water pump or the hydraulic pump (pump power) for the power steering to drive . Likewise, it is in the household washing machines used for rotating the drum.

V-belts normally run on V-belt pulleys with a fixed diameter. However, you can also push two conical disks further together or apart, so that a wide V-belt runs further inside or outside. This creates an infinitely variable transmission . Automatic transmissions with such variable pulleys have been used in DAF automobiles . They are called Variomatic . Similar designs have been used in more recent times in scooters .

While flat belts are not standardized, V-belts are largely standardized so that they can be used and exchanged regardless of manufacturer . Since there are different standards, DIN 7753 Part 1 / ISO 4184 European and RMA / MPTA American, a conversion factor Ld to La is used.

Since a V-belt is relatively high (thick), the deflection results in a compression on the inside and thus in heating. The V-belt can be toothed to allow smaller pulley diameters or to reduce losses. However, a toothed V-belt is still a V-belt because it works in a force-locking manner through the wedge effect on the flanks. 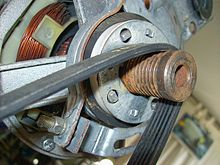 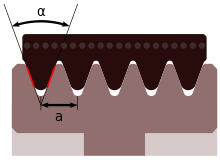 The V-ribbed belt (also ribbed belt ) is a further development of the belt. V-ribbed belts combine the advantages of flat belts (small radii) with those of V-belts (lower wrap angles or greater friction).

The belt has ribs that run lengthways. The pulley has corresponding grooves. V-ribbed belts have recently been used increasingly, for example, in so-called serpentine drives of engines to drive several auxiliary units (such as cooling water pumps , air conditioning compressors , alternators , servo pumps in motor vehicles) but also in washing machines. With V-ribbed belts, several units can be driven with one belt, as the belt is flexible in both directions due to the low height of the belt. The belt is then guided in serpentines in order to achieve the necessary wrap angle for each unit. V-ribbed belt drives in motor vehicles can be designed for a service life of 160,000 km. In contrast to the V-belt, which is often statically tensioned, you need automatic tensioning systems in order to be able to guarantee a belt force that is as constant as possible under all operating conditions.

The usage number of the ribbed V-belt (noted on each ribbed V-belt) provides information about the number of ribs, the profile spacing in mm (PH = 1.60, PJ = 2.34, PK = 3.56, PL = 4.70 and PM = 9.40) and the reference length in mm, but possibly also in inches. Some manufacturer information is also given without the P and / or in a different order or with additional information.

Link V-belts (also lamellar V-belts) are finite V-belts that consist of individual links (slats) (sold by the meter). The individual links are connected to one another using rotating steel rivets (drive belt) or a T-piece end (high-performance conveyor belt) and are made of polyurethane elastomers reinforced with several layers of polyester fabric. The power transmitted and the pulleys used correspond to classic V-belts or narrow V- belts made of rubber fabric.

The structure of the link V-belt allows you to assemble any required belt length yourself in a few simple steps. The design also proves to be advantageous for internal drives (or transport routes), since the link V-belt in the drive can be closed (endlessly), thus eliminating the need for time-consuming dismantling. When installing, link V-belts ̣ - in contrast to woven rubber V-belts - may be opened, as they are elastic due to the polyester / polyurethane material composition .

These properties allow drives to be specifically designed internally and to dispense with clamping devices.

The service life intervals of link V-belts are due to the material composition in comparison to rubber fabric V-belt systems - especially under difficult environmental conditions, e.g. B. Temperatures (from −40 ° C to +116 ° C), oil, water, steam, chemicals, abrasive media - greatly increased.