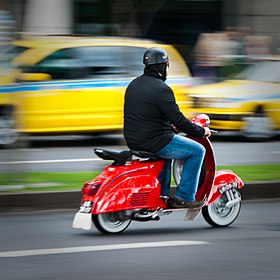 Motor scooters are special types of motorcycles that are driven without knee joint . The typical scooter, as it became known in the 1950s with Vespa , Lambretta and the like, has a free passage between the handlebars and saddle, i.e. no fixed vehicle parts such as fuel tank and engine in the knee area, a floor plate as a step instead of footrests and a panel to protect against pollution.

The American manufacturer Autoped Company of Long Island City , New York , produced the first motor scooter originally intended as a children's scooter in 1915. The first German-made scooter, a license replica of Autoped, was manufactured by Krupp in Essen in 1919 ; the Krupp scooter, only 130 cm long, had front-wheel drive . DKW called its chair wheel , which was manufactured from 1921 and which had the criteria of a motor scooter, Golem ; It was produced by Eichler in Berlin from 1921 to 1922. The DKW chair wheel Lomos , created in 1922, had a 142 cm³ two-stroke engine and, like the Golem, fan cooling and belt drive; This production was also given to Eichler and ended in 1925. Both DKW models had a pushed short swing arm with an auxiliary fork on the front wheel .

In 1946 the scooter became known worldwide through the Vespa from the Italian company Piaggio . Innocenti with the Lambretta followed in 1947. The typical shape comes from the motor scooters of allied airborne troops, the so-called welbikes . This design has been adopted by many manufacturers to this day.

Motor scooters were often seen in movies of the time, which encouraged their distribution, for example in

Driving a scooter became an important part of the youth subculture of that time (see Mod (subculture) ).

One of the first West German scooters after the war (1949) was called Walba (later continued to be produced as Faka ). The first scooter boom was in the years of the economic miracle . Other West German scooter types were the Maicomobil , the Heinkel Tourist , the Zündapp Bella and the Dürkopp Diana. From 1954 to 1957, DKW built the DKW Hobby scooter with a continuously variable belt drive ( Uher system ) in an edition of 45,303 units. In Austria, Puch dominated the market with 125 and 150 scooters; there were also small scooters with 50 cm³ displacement, u. a. Puch DS 50 .

In the GDR , the Pitty , Wiesel , Berlin and Troll scooters were widely used, as were the Čezeta , Tatran and Manet models imported from Czechoslovakia . At the beginning of the 1950s there were heated discussions in the press about the problem that women as pillars were often taken in the woman's seat, i.e. sitting on the side of the scooter, which was sometimes the cause of accidents. Furthermore, the small scooters KR50 and Schwalbe were produced by Simson , which, however, are to be understood more as disguised mokicks . The SR50 small scooter followed in 1986 . The Simson small scooters were produced in large numbers. 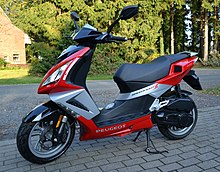 In the 1990s, the industry managed to give the scooter a new image that replaced the classic moped in the form of the mokick.

“It was only at the moment when the manufacturers realized that 50s scooters were not only sold to housewives and pastors that the scooter shaft gained momentum. The key to this development lay in the discovery of the sporty scooter genes. "

The scooters were now mainly sold as scooters and city ​​cars . In 1994 the Aprilia SR 50 appeared , the first sports scooter in the class up to 50 cc that was technically state-of-the-art. The Honda CN 250 Helix scooter with a displacement of 250 cc was offered in Germany in 1992. Yamaha Majesty (1996) and Suzuki Burgman (1998) followed. "Covered" scooters like the BMW C1 (2000) or three-wheeled scooters like the Piaggio MP3 (2006) represent new stages in the development of the scooter. Powerful scooters such as the Aprilia SRV 850 and BMW C 600 Sport appeared in 2012. The two-stroke engines built up to now In new vehicles, 50 cm³ displacement will be replaced by four-stroke engines due to the exhaust gas regulations that have been in force since 2016 . Since 2003, scooters with two-stroke engines over 50 cm³ are no longer available as new vehicles.

Scooters are offered for different speeds and driver license classes.

The market for 50 cc two-stroke scooters was dominated by Aprilia , CPI , Gilera , Italjet , Kymco , MBK , Peugeot Motocycles , Piaggio , SYM and Yamaha until the 2000s . The market leader in Europe today is Piaggio, a sales group that, in addition to Piaggio, also manages Vespa , Aprilia , Gilera and Malaguti ; In addition, Italjet , Honda and Benelli manufacture in Europe , in France ( MBK or Yamaha and Peugeot Motorcycles ) and in Spain Tauris.

The vast majority of scooters are now manufactured in the Far East, either in Taiwan or China . They are in-house developments or are manufactured under license (for example by Honda , Yamaha or Sachs ). A number of Chinese manufacturers produce identical scooters under different brand names, which in Europe are not sold through specialist dealers, but via alternative sales channels without their own service network, for example through hardware stores, teleshopping, eBay or as an addition to mobile phone contracts. These include brands like Baotian , Buffalo, Dafier , Jack Fox, Jimstar, Jinlun, Jinan Qingqi , Rex , Tell , Yiying ( Benzhou ), and Zhongyu.

Piaggio with Aprilia , Kymco , Yamaha (TMAX and Majesty), Honda ( Silver Wing ) and Suzuki (Burgman 400 and 650) play a major role in scooters over 125 cm 3 displacement, for which the A2 or A driving license is required .

Most scooters are powered by single cylinder engines. Due to the more stringent exhaust gas regulations (EU directives 97/24 / EC and 2002/51 / EC), fewer two-stroke engines will be installed in the future , although injection systems and unregulated and regulated catalytic converters will be used. The Euro 4 emissions standard , which has also been in force for scooters since January 1, 2016 , is now also met for new vehicles with two-stroke engines.

The advantages of a two-stroke engine are the higher performance at lower speeds, the resulting better acceleration, generally a broader usable speed range, the lower weight, lower vibrations and the simple and inexpensive manufacture and maintenance. In the late 1980s, the scooter manufacturers countered the inherent disadvantage of the two-stroke engine that engine oil had to be added to the fuel (two-stroke mixture) with automatic mixing devices with storage tanks for the lubricating oil.

The particle emissions of a scooter with a two-stroke engine are far higher than that of a passenger car with a diesel engine . With direct injection, as in diesel engines, nitrogen oxide emissions can be higher than that of a four-stroke gasoline engine with carburettor. The reason for the high particle emissions in the two-stroke engines is the poor combustion of the added lubricant. Since 1999, through the application of the Euro 1 emissions standard , unregulated oxidation catalytic converters have been used.

A study by an international team of researchers in 2014 found that scooters with two-stroke engines emit significantly more organic aerosols than other motor vehicles, both when idling and when driving . The values ​​for unburned or partially burned hydrocarbons were 124 times higher, and for aerosols up to 771 times higher. The results show that scooters with two-stroke engines are “asymmetrical air pollutants” which, in “extreme cases, are responsible for up to 96% of the organic emissions in the streets”. Even waiting behind a two-stroke scooter at a traffic light can be “extremely harmful to health”.

Since 2003, four-stroke engines have been installed almost exclusively in scooters with a capacity of 125 cc or more. The Italjet Dragster and Gilera Runner models were the last models available for sale in 2003 with a powerful two-stroke engine; the Vespa PX 150 model with a catalytic converter reaches Euro 3 and is still available today. In the meantime, four-stroke engines are being used in more and more 50 cm³ scooters. Particularly powerful models have two cylinders (for example Yamaha TMAX, Suzuki Burgman AN650 , Honda Silverwing ; all three have a top speed of around 175 km / h and accelerate to 100 km / h in 6.5 to 8 seconds). The fastest scooter currently available is the Aprilia SRV 850 with 839 cm³ and 56 kW (76 hp) engine power and a top speed of over 190 km / h.

Traditionally, motor scooters and gears form a unit. Older scooters mostly have manual gearshifts or a foot-operated rocker switch. Don Heyer (1942) and Edmond Uher (1954), whose drive was used at the DKW Hobby , were granted the first patents for a continuously variable transmission using a variator and belt drive .

The combination of an automatic, continuously variable belt drive with a drive unit swing arm has been state of the art since the 1990s . It can be produced at a low cost. Its low price made the scooter popular again as a short-haul vehicle in Germany. The continuously variable V-belt transmission is often referred to as " variomatic " after the Daf car . The drive unit swing arm transfers the engine power to the rear wheel via gear wheels (direct drive), belts or chains. A disadvantage in terms of driving dynamics is that the drive train swing arm has a higher unsprung mass on the rear wheel than a conventional swing arm .

When scooters can be in the context of four construction methods differ fundamentally:

The front wheel is guided either in a pulled short swing arm (Vespa), pushed short swing arm or in a telescopic fork . Only the Italjet dragster had stub axle steering. A drive unit swing arm is used for the rear wheel guidance in modern scooters up to 50 cm³ displacement , scooters with larger displacement (large scooters) usually have the motor permanently installed in the frame. 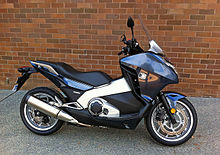 The tire size currently varies between 10 and 14 inches for classic scooters and 15 to 17 inches for large wheel scooters; 17 inches are used exclusively on the Honda Integra (scooter) . Because of the small tire size, the scooter is significantly less stable than a comparable motorcycle with larger tires. As the tire size increases, uneven ground is better balanced and the moment of inertia around the vertical axis increases; this makes the scooter look less wobbly.

The scooter was delivered with drum brakes on both wheels until the early 1990s . With the Vespa Cosa , a composite brake (1988) and an anti-lock braking system (1992) were offered in the scooter segment for the first time . While all new scooters over 125 cm³ cubic capacity according to EU regulation 168/2013 / EU have to be equipped with ABS since January 1, 2016, this system (as of May 2016 ) is little in the light motorcycle class (up to 125 cm³ cubic capacity) in the class up to 50 cm³ displacement not available.

Some scooter drivers also call themselves Scooterists or Scooterboys (from English Scooter = scooter). Scooterists usually prefer sheet metal scooters with manual transmission as it is a trend with strong traditions (see also Mod (subculture) ). Many scooterists have also come together in scooter clubs (S. C.) or scooter clubs (R. K.) and organize meetings, allnighters or racing events such as the Euro Scooter Challenge.

German brands, formerly known as Heinkel , Zündapp , NSU , Maico , Simson , IWL and others, have disappeared from the market, as have American models such as Wyse . 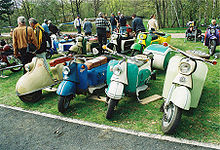