The title of this article is ambiguous. Further meanings are listed under Vespa (disambiguation) .

Vespa from the Piaggio company

The Vespa ( Latin / Italian for wasp ) is a motor scooter from the Italian company Piaggio . It is one of the world's best known and most popular types of scooters.

Vespa production in the early years

The first Vespa, the Vespa 98 , came on the market in 1946 and was nicknamed "Paperino" (duckling); it had a displacement of 98 cc and was capable of a maximum of 60 km / h. Its inventor was Corradino D'Ascanio  - an engineer whose dream was to build helicopters . He developed the concept of the Vespa shortly after the end of the war on behalf of Enrico Piaggio , assuming a seated person around whom he arranged the technology of the new two-wheeler. As a former designer of war aircraft , he wanted to go beyond the production of pots and pans with the existing tools.

The original Vespa "98" should be simple, economical and easy to drive - and it should be possible to build it with the existing production facilities. Because Corradino had never designed motorcycles before, he approached this task completely impartially. The drive and the power transmission should be as simple as possible and so he decided on a drive unit swing arm without secondary chain, especially since the chain drive was almost impossible in the time of need due to lack of material. The Vespa should also not have any engine parts that you could get dirty on. Therefore, the engine was completely hidden. The tire change should be as easy as in a car.

At the end of 2016, the Vespa Elettrica study, the first Vespa with an electric motor, was presented at the EICMA in Milan. The E-Vespa is based on the current Vespa Primavera. From spring 2018, the e-Vespa with a range of 100 kilometers and a TFT display with on-board computer was available for purchase from dealers. 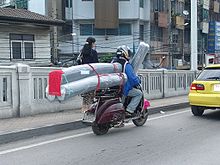 For the development of the concept it is important that at the former Piaggio factory airport in Pontedera near Pisa the use of certain resources (factory, material, design experience) should be optimally guaranteed with a small project. The consumers, who mostly still had to suffer from the privations of the war, needed an inexpensive but attractive means of transport that could not be damaged by driving on damaged roads. As so often in the history of technology  , these limitations resulted in an ingeniously simple concept, the Vespa . Her name was registered for a patent on April 23, 1946. With just 3.2  hp, it reached a speed of 60 km / h. The very simple structure of the chassis with short swing arm at the front and drive unit swing arm at the rear has been retained to this day. This results in the design-related disadvantage of limited suspension comfort and weaknesses in driving behavior. However, this did not detract from the success of the Vespa.

In 1965 more than three million Vespas had already been sold worldwide, after which their triumphant advance in Europe slowly ebbed, because the automobile became affordable for the broad masses . However, the Vespa became one of the most important means of transport in India and parts of Asia as well as some countries in Africa, and in some cases it still is today. In addition to Germany, various Vespa models were built under license in all parts of the world. B. in India by Bajaj and LML , in France by ACMA , in England by Douglas , in Pakistan, in Iran and in Malaysia. In the USSR, the GS3 was copied and built under the name Vyatka without a license in a slightly modified form in large numbers.

For older and rare models such as the Vespa U , Hoffmann Vespa , Vespa SS50 and SS90 or the French military Vespa TAP 56 or 59 , from the license production of the company ACMA, are collector's prices paid.

The manual Vespas are criticized for the fact that the technical equipment does not correspond to the current state of the art ( ergonomics , environmental compatibility , etc.), on the other hand they have several advantages based on this: the design independent of fashion or the possibility of self- repair .

The supply of spare parts for vehicles from Piaggio is good, and the market also offers a wide range of additional items.

In the 1950s, the Vespa also became known north of the Alps and became a favorite vehicle, especially among the younger generation. The first Vespas were exported to Switzerland as early as 1947, and they came to Germany around 1950. Jakob Oswald Hoffmann signed a license agreement with Piaggio in 1949 and began building Vespas for the German market in Lintorf in the Rhineland from spring 1950. Between 1950 and 1953 he built the HA model and only in 1953 the HB model.

At great financial expense and due to the great competition, especially from the more powerful “Lambretta” scooters from the manufacturer Innocenti, Hoffmann continued to develop the Vespa (especially its engine) without the approval of the Piaggio works and finally brought the “Queen” onto the market in 1954. Piaggio then terminated Hoffmann's license agreement without notice.

In addition, Hoffmann put a lot of effort into developing a scooter mobile (Hoffmann cabin) similar to the BMW Isetta . Due to the very great similarity and the patent rights that were infringed, the BMW Group sued the Hoffmann-Werke. BMW won the process. Therefore, and because of the investments in the abandoned Vespa production, the Hoffmann-Werke had to file for bankruptcy at the end of 1954. Vespa production was continued in the Messerschmitt works in Augsburg.

For a certain period of time there were two manufacturers and suppliers of Vespas in Germany during the insolvency phase of the Hoffmann-Werke and at the same time when the Messerschmidtwerke started production, as Hoffmann's insolvency estate also contained a number of pre-produced sets of parts from which the insolvency administration instructed Complete scooters were assembled and sold.

Past and current types

Only a selection of the earlier types is given:

The motorized “ wasp ” (Vespa) also has a relative, the “bee” ( ape ), which is still a popular tricycle transporter in the region around the Mediterranean Sea.

The scooters that are still in production today have achieved cult status . Some Vespa drivers refer to themselves as “Vespisti”, some of which are organized in clubs, car pools and regulars, with regular meetings (Vespa World Days, National Vespa Days etc.) or rallies taking place.

The first Vespa clubs were founded in the late 1940s. The local local clubs were brought together by umbrella organizations in individual countries (e.g. Vespa Club Austria, Vespa Club of Germany , Vespa Club Switzerland etc.). In Europe, the Vespa Club d'Europe was created, which then became the FIV (Federation Internationale des Vespa Clubs). The FIV, in turn, dissolved at the end of 2005 and was replaced in 2006 by the "Vespa World Club".

The Vespa “scene” is mainly divided into Vespa “screwdrivers”, classic car enthusiasts, touring drivers and “everyday users”. In Germany, some of the Vespisti were called "Prodomo drivers" - that was originally an insult for those Vespa drivers who were not ready to devote themselves body and soul to their vehicle, that is, in a figurative sense, were ready to take their place Satisfying real espresso with a brewed coffee like Dallmayr Prodomo. Meanwhile there are also self-confessed "Prodomists" and "Prodominas".

In Germany, in addition to the club newspaper of the VCvD (the "Vespina"), the WESPE has been on the market since July 1, 2014 . The Waspe is a quarterly print magazine that deals exclusively with the Vespa topic. Topics include restorations, trips, background reports, product presentations and much more. The WESPE has also been sold in Austrian newsagents since the end of 2014.

Couple with a red Vespa from Ian Marsden

Artists have been modifying their scooters into custom scooters since the 1960s . The German artist Eberhard Bosslet realized four photo series on the Canary Islands , Spain, under the title “Mobilien & Immobilien” . An old Spanish Motovespa Sprint "04C" from 1966 was used, which he often painted in alternating dialogue with the backgrounds.