The title of this article is ambiguous. Further meanings are listed under Piaggio (disambiguation) .

Piaggio is an Italian vehicle manufacturer based in Pontedera . The company produces various mopeds and scooters , including the Vespa , the Ape cargo tricycle and the Porter van .

Piaggio has worked in various industries throughout its history. From wood storage to shipbuilding, railway construction, aircraft and automobile construction it went to the motor scooters. In 2014, a profit of 69.7 million euros was achieved on sales of 1.2 billion euros. In 2014 about 7,500 employees produced 550,000 vehicles. On January 1, 2016, 332,605 Piaggio motorcycles were registered in Germany, which corresponds to a share of 7.9 percent.

The Piaggio company was founded in 1884 by Rinaldo Piaggio . His father, Cavalier Enrico Piaggio, laid the foundation stone by buying a piece of land in Sestri Ponente , Genoa , originally for a timber warehouse, in 1882 . Initially, the family company Piaggio concentrated on shipbuilding. Later they switched to the construction of railroad cars. With the advent of aviation , Rinaldo Piaggio turned to aircraft construction . He found the right engineers and began building aircraft in 1916; for this purpose he built a new plant in Pontedera .

Due to the war, Piaggio was very successful in the late 1930s, as the Italian army was one of the company's customer base. During the Second World War, however, the main factory in Pontedera was completely destroyed. After 1945 the victorious powers decided that Piaggio was no longer allowed to manufacture armaments. Rinaldo's son, Enrico Piaggio, has now taken over the management of the company. He observed that there was an increased need for inexpensive means of transport in Italy, as mobility had stalled due to the destruction and reconstruction of Italy. To counter this fact, Piaggio developed a scooter , which he sold in 1946 under the name Vespa [ital. "Wasp"].

In the following years Enrico Piaggio continuously expanded the model range. In 1948 the company presented a three-wheeled van, the Ape [ital. "Bee"]. In 1957 she presented the small car Vespa 400 at the Paris Motor Show . Four-wheeled vans were added later. The Ciao model followed in 1967 , a new generation of moped models that was particularly popular with young people.

In 1987 the company took over the Austrian moped manufacturer Puch . In the 1990s, Piaggio launched various scooters that did not go under the Vespa label : Piaggio Hexagon , Piaggio Sfera , Piaggio Skipper , Piaggio Zip . In 1999 Deutsche Bank took over 80% of the shares in Piaggio through its subsidiary Morgan Grenfell Private Equity for 1.35 trillion Lire. In 2003 the shareholder structure changed again: the Italian billionaire Roberto Colaninno took over 31.25% through his holding company Immsi , a consortium of 27 creditor banks 37.5% and 31.25% remained with Morgan Grenfell . Today Immsi Spa holds around 55% of the share capital in Piaggio.

After Piaggio took over the Spanish two-wheeler manufacturer Derbi in 2001, the well-known Italian motorcycle companies Aprilia (including the Laverda brand ) and Moto Guzzi followed in 2004 . Piaggio is now the market leader in scooter construction in Europe. Piaggio has been listed on the stock exchange since 2006. [obsolete] In June 2014, Piaggio Deutschland GmbH moved from Kerpen to Düsseldorf.

With the scooter MP3 , a completely new vehicle concept with three wheels was presented in 2006.

Piaggio currently sells Vespa and Piaggio motorcycles as well as the Aprilia, Derbi, Gilera, Laverda and Moto Guzzi models listed in the relevant articles . The models of the Vespa brand have a self-supporting sheet metal body ( PX , LX , GTS ), those of the Piaggio brand ( e.g. Piaggio Zip , NRG, TPH ) have a tubular steel frame and a plastic body. The engine range extends from 50 to 500 cm³. 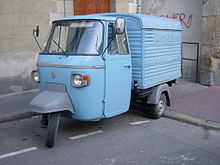 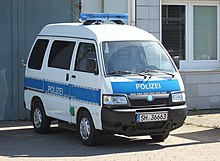 The Ape has been built since 1947 and has between 50 and 422 cm³ displacement. An electric drive is also installed. 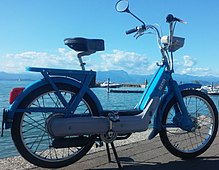 All models have a two-stroke engine with 50 cm³ displacement

The Piaggio Museum was inaugurated in March 2000 in the tools department of the old factory, one of the oldest buildings in the Pontedera factory complex. The company relocated its production to this historical area in the early 1920s. In April 2018 the Piaggio Museum was expanded. The museum now has an area of ​​5000 m² and more than 250 exhibits. It is the largest and most comprehensive Italian museum dedicated to two-wheelers. In addition to the exhibition space dedicated to the permanent collections, the Piaggio Museum also has 340 m² of temporary exhibition space, which allows the museum to vary its cultural offerings, from art to technology to scientific unveiling and fashion. Over the years, exhibitions, events and works by various artists of modern and contemporary art have taken place here. In 2003, the Piaggio Museum and the Historical Archives were recognized as the best museum and best commercial archive in Italy during the 2003 Economy and Culture Prize.