Moto Guzzi is an Italian manufacturer of motorcycles . Until the end of the 1980s, the product range included mopeds (Guzzino), scooters (Galletto), small motorcycles (Cardellino), three-wheelers ( Ercole , Mulo) and motorcycles with displacements between 125 and 1400 cm³. The company has been part of the Piaggio Group since 2004 and is managed by Tommaso Giocoladelli.

Moto Guzzi V11 Sport from 2000 with modifications to the fork, exhaust system and paintwork

Moto Guzzi has been known for its V2 engines with a longitudinal crankshaft since the V7 model from 1966 . This design enables a low center of gravity, favors a cardan drive , since only one angular drive (on the rear wheel) is required, and compared to the boxer engine offers greater freedom from lean angles with less favorable mass balancing . The valve control of the V-2 was based on a camshaft with bumpers located below ; it was not until 1999 that overhead camshafts were used on some models .

Since the 1970s, Moto Guzzi was the first manufacturer to introduce a composite brake known as an integral brake system into large models . The left front and rear brake discs are operated by the foot lever, while the right disc is operated by the hand lever. Since 2006 the manufacturer has offered an electronic ABS instead.

On March 15, 1921, Army aviator Giorgio Parodi and his friend, aircraft technician Carlo Guzzi , founded “Moto Guzzi SpA” in Genoa with the financial support of Giorgo's father Emanuele Vittorio Parodi, with a plant in the Italian town of Mandello del Lario .

The first machine, the GP (Guzzi.Parodi), was built as a prototype with the help of the Mandello blacksmith in the basement of the Guzzi house. In a slimmed-down form, 17 motorcycles were built as the normal model in the year it was founded. Because of the close relationship between Parodi and Guzzi with airplanes and in memory of the third member of the Bund when the idea was born, Giovanni Ravelli, who crashed shortly after the First World War , the company logo is an eagle with outspread wings.

In 1925, 1200 motorcycles were built in Mandello del Lario with over 300 employees. In 1928, Carlos brother Giuseppe Guzzi developed a future-oriented rear wheel suspension. It had a triangular swing arm with a set of springs that lay lengthways under the engine and was far superior to the suspensions customary at the time. Giuseppe Guzzi drove the “GT” offered in addition to the sports models as far as the Arctic Circle in Norway to prove its reliability. This earned the "GT" the nickname "Norge".

In 1934 Moto Guzzi was the largest motorcycle manufacturer in Italy.

In 1935 the Irishman Stanley Woods won the senior TT race at the Tourist Trophy on the Isle of Man on a 500 cm³ rear-wheel suspension "Bicilindrica" ​​as the first pilot on a foreign machine . In the period that followed, all works racing teams switched to models with rear suspension. In the 250cc class, too, caused a sensation with the Italian star pilot of the time, Omobono Tenni . In 1937 Tenni won the quarter liter European title and was the first foreigner ever to win the Tourist Trophy with the TT race in the lightweight class. 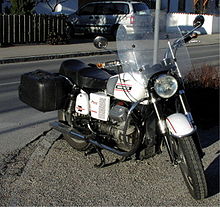 After the Second World War , small, cheap transport devices for mass motorization were initially in demand. Moto Guzzi satisfied the rapidly increasing demand with the first two-stroke engine , the "Guzzino" 65, of which 50,000 were sold in the first three years. This motorcycle was further developed as the Moto Guzzi Cardellino in the 1950s. Giulio Cesare Carcano, Lino Tonti and Umberto Todero made themselves unforgettable as designers. In addition, larger motorcycles with horizontal single-cylinder four-stroke engines were also built again from 1949 :

The late 1940s and early 1950s were a very successful period for the company thanks to the racing successes in the European motorcycle championship and the newly created world championship . Between 1947 and 1948, the manufacturer won four of the six European championship titles it had won. In 1949 , works driver Bruno Ruffo became the first 250 cc world champion in history, and in 1951 he repeated winning the title in this category. In the 1953 season , Fergus Anderson won the first driver's title in the 350cc class for Moto Guzzi, which he successfully defended the following season . By 1957 , the pilots Bill Lomas and Keith Campbell followed three more titles. Moto Guzzi then withdrew from racing, as the entire Italian motorcycle market had fallen into an existential crisis at this time. Cars were in demand, and motorbike sales fell rapidly. The 1957 world championship title was the last great racing success for Moto Guzzi. In 1955 Giorgio Parodi died, in 1964 Carlo Guzzi, who was never a shareholder in Moto Guzzi, but always only a “technical advisor”.

On February 1, 1967, a new company was founded under the name SEIMM . There were new Moto Guzzi models again:

The technical basis for today's models was laid at the end of the 1950s. At that time the “unemployed” racing department developed the 90 ° V two-cylinder for installation in the new small Fiat . In the mid-1960s, this engine concept was reactivated for a tender for an Italian government motorcycle, adapted to the requirements of a motorcycle and combined with a cardan drive. The characteristic feature of the Moto Guzzi motorcycles since then has been the V-shaped cylinder heads of the longitudinal engine that protrude laterally from the profile.

The two product lines differentiate between touring machines , especially with the “California” model, and sporty motorcycles such as the “Le Mans”, “Daytona” and “Centauro”.

Moto Guzzi, however, repeatedly had major economic difficulties until Ivano Beggio, as the owner of Aprilia, decided in 2000 to buy Moto Guzzi as well as Laverda and to renovate it comprehensively. His first development is the “Rosso Mandello”, which is an immediate success.

Between December 28 and 30, 2004, the Piaggio Group took over the Aprilia Group, including Moto Guzzi. The Italian motorcycle pool was born, Moto Guzzi was now part of a world-leading group with a turnover of 1.5 billion euros and a market share of 24 percent in Europe.

On March 3, 2005, 47-year-old Daniele Bandiera was hired to be responsible for the restart of Moto Guzzi. On March 24th, the new Breva 1100 model was officially presented in Milan , with some technical innovations in the cardan construction and the tried and tested air-cooled V-engine, which now also meets the Euro 3 emissions standard . Production continues at the Mandello plant, which has now been modernized. The plant needs around 13,000 motorcycles sold each year to survive. Moto Guzzi was well on the way to achieving this: more than 10,000 motorcycles were built in 2006, after 4,000 in 2004 and 7,000 in 2005. The new engine production that went into operation in 2006 also contributed to this, and it was the first at the celebrations for the company's 85th anniversary could be visited.

The following models are no longer produced.

Unless otherwise stated, it is an air-cooled, single-cylinder , four-stroke engine . 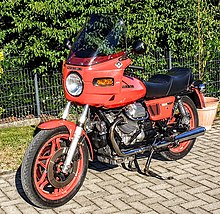 In the Don Camillo and Peppone novels by the Italian author Giovanni Guareschi , one of the two main characters, the communist mayor “Peppone” Bottazzi, drives a Moto Guzzi.