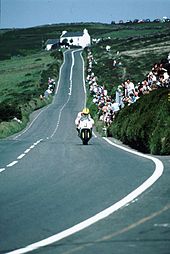 Map of the Snaefell Mountain Course

The Isle of Man TT (usually short TT for Tourist Trophy) is a motorcycle race that has been taking place on the Isle of Man since 1907 . It is considered to be the oldest, most dangerous and most controversial motorcycle race in the world. 259 racing drivers have died on the road circuit since 1911 (as of June 2019). Over 40,000 racing fans flock to the island every year for the one-week series of competitions that are held as part of the TT, which is roughly half the population of the island.

This oldest motorcycle race in the world takes place on the Snaefell Mountain Course, which is not a permanent circuit , but consists of normal roads on the island. These will be closed to private traffic during training and the competition . The race is one of the most important road races in the world.

The route starts and ends in Douglas . The 37.733  mi (60.725  km ) long route places demands on people and equipment like no other race. It is hardly possible to memorize every curve and the associated braking points. Siegfried Schauzu commented:

"Missing the ideal line by 10 cm can mean the path to the afterlife."

In the race there is no common starting field, but the opponents start individually with a time delay. During pit stops, the time is neutralized. The average speed in the TT is over 130 mph (209  km / h ) in the races with the fastest machines  . For comparison: on the modern racetracks on which motorcycle Grand Prix are driven, an average of approx. 160 km / h is achieved.

Fatal accidents occur almost every year; From 2000 to 2013 alone, 21 deaths were registered. Fall rooms and catchment areas are sparse or even non-existent. The participants move on the asphalt between houses, stone walls and embankments. Road crests, such as those on bridges, have hardly been defused or have only been leveled in later years.

The most successful TT drivers

It was only after 1900 that the first motorcycle races on the continent took place under the name Coupe International, alternating in the country of the last winner. A set of rules was used that stipulated the weight of the machine and its driver. At that time it was already becoming apparent that England would take the lead in motorcycle racing. However, the British government soon passed a regulation that banned racing on non-permanent circuits.

The regulation of continental races with regard to weight, the ban on events in England and the urge for progress in motorcycle racing brought the solution in the form of a circuit race on the Isle of Man, which did not belong to the United Kingdom, but had a special position as an autonomous crown possession and therefore the ban did not had to pay attention.

A tool kit also had to be carried - it was really needed. The motorcycles had to have well-functioning exhaust systems, a proper saddle, fenders, and two-inch tires. Another important provision stipulated pedals so that they could support the forward thrust - so pedaling was allowed in the first TT. Pedals were banned as early as 1908.

Rem Fowler after his TT victory in 1907

The races on the Isle of Man

On May 28, 1907, the first race on the Isle of Man with 25 drivers took place. At that time it was about the St. John's Short Course , which led from St. John's via Ballacraine, Kirkmichael and Peel . The 25 km long route had to be lapped ten times. The first winners were Charlie Collier in a Matchless single-cylinder and Rem Fowler in a Norton with a Peugeot engine in the two-cylinder. In 1909 and 1910 only one class was advertised. This was open to both single-cylinder machines with displacements of up to 500 cm³ and two-cylinder machines with up to 750 cm³.

The 60.7 km long Snaefell Mountain Course , which automobiles had been using since 1904, was used for the first time in 1911 . In addition, there were again two categories that still exist by name today, the junior class with up to 350 cm³ displacement and the senior class with up to 500 cm³. In the senior race, the first three places went to the Indian brand . The First World War interrupted the races from 1915 to 1919.

In 1920, the first Isle of Man TT after the war brought another expansion of the regulations: Lightweight 250 was introduced as a further class, but was not officially included in the rating until 1922. In 1921 the Senior TT was won for the first and only time by a driver with a 350 cc machine. Howard Dowies succeeded in doing this on AJS In 1925, the entire route was paved for the first time .

In 1927 Archie Birkin had a fatal accident in one of the training runs that were held in the early morning hours with traffic on the Snaefell Mountain Course. He hit a wall with his 500 cc McEvoy in Rhencullen while trying to avoid a delivery truck heading towards Peel and was dead on the spot. The curve on the A3 between Kirk Michael and Bishopscourt has been called Birkin's ever since Bend. From 1928 onwards, the training sessions for the Isle of Man TT and the Manx Grand Prix were no longer held while traffic was running.

In the 1931 race, the average speed was over 80 mph (129 km / h) for the first time. In 1935, Irishman Stanley Woods won his fifth TT title on Moto Guzzi , having previously won four times on Norton . In 1937 a foreigner won a TT for the first time in the lightweight TT , the 250cc class: Omobono Tenni on Moto Guzzi. In the following year, Ewald Kluge won a TT race in a DKW , also in the 250cc class, as the first German. In 1939 Schorsch Meier was the first foreigner to secure the coveted 500 trophy on a BMW .

After the Second World War, the Tourist Trophy of numbered 1949 bis 1976 the Motorcycle Road Racing World Championship the FIM . In 1951 the range was expanded to include the 125 cm³ class. In 1957, on the golden jubilee , the Scot Bob McIntyre overcame the 100 mph limit (approx. 161 km / h) for the first time on his 500 cm³ Gilera. In 1958, MV Agusta was the first brand to win all four solo classes. In 1959 Honda sent a team to the TT for the first time and immediately won the team award. In 1960 John Surtees won the senior TT for the third time in a row.

In 1961 Mike Hailwood Honda secured the first two titles (in the 125cc and 250cc class) and won the Senior TT on Norton. In 1962 - for six years - the regulations were expanded again: the 50 cm³ class (ultralightweight TT) was added. In 1965 Jim Redman achieved a one-two result for the third time in a row.

Boycott the race and change status

After Gilberto Parlotti in the World Cup 1972 season was cc in the class to 125 crashes lying fatally lead, decided Giacomo Agostini , never to go back on the dangerous course. Top drivers such as Phil Read , Barry Sheene and Rodney Gould joined this boycott , so that until the 1976 World Championship season the races were more or less only contested by private drivers. The FIM took the Tourist Trophy in late 1976 from the valuation of the streets Cup. In 1977 a new series was created with the Formula TT as a replacement, which also had world championship status. This was divided into three categories (TT-F1 to TT-F3) and existed until 1989 as a world championship, which was replaced by the newly created Superbike World Championship . In 1977 and 1978 the TT winner was also world champion in the respective class, after which other races were included in the championship standings.

The event's anniversary race took place in the week from June 2nd to June 8th in 2007.

At the Junior TT 1926 Garelli appeared with the most powerful motorcycle of the time. The racing machine had four carburettors and developed around 20 hp at 4500 revolutions per minute. There were two carburettors on each side, coupled in such a way that normally only two were in operation, while the other two carburettors did not work until the driver turned the throttle grip above a certain point. It was also noteworthy that the machine had two exhaust ducts. The experts on site kept talking about the huge noise that the two-stroke made and about Erminio Visioli , who kept falling off the curve during training. In the end, however, he retired from the main race due to a break in the throttle linkage.

The Audi TT was named after the Isle of Man Tourist Trophy , u. a. based on Ewald Kluge's victory on a DKW.