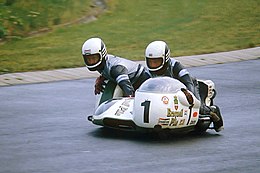 Steinhausen / Hiller at the Great Britain Grand Prix in 1989

Steinhausen made his debut in motorcycle racing in 1961. Through his friendship with the team legend Max Deubel , who supported the young Steinhausen with advice and action with his know-how, Steinhausen gained his first experience in the national ID class. Max Deubel recognized Steinhausen's talent and left him one of his teams.

In 1972 Steinhausen switched from BMW boxer engines to König four-cylinder two-stroke engines from the Berlin company König Motorenbau , which had their origins in motorboat racing. The new engines with different dimensions allowed Steinhausen to build them better in the trailer and the aerodynamics of the vehicle were significantly improved.

For his sporting success in motorsport, he received the Silver Laurel Leaf from Federal President Walter Scheel in 1975 .