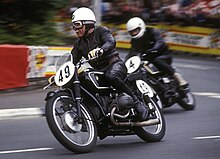 The "Cast Iron Schorsch" - under this martial nickname he became known - belonged to the group of racing drivers whose talent was already known before 1939, but who were then deprived of the opportunity to develop into a world-class driver by the Second World War .

Meier successfully completed his mechanic apprenticeship, which he began in 1925, in 1928. In 1929 he joined the police service of the Bavarian State Police . In 1933, in police uniform , he set out on the 2000-kilometer trip to Germany. In 1936 he switched to the Wehrmacht . From 1937 he competed in motorcycle races in a BMW . In 1938 he was able to win both the European Championship title and the German championship in the 500 cm³ class for the Munich team. In 1939 he was the first non-British driver to win the 500cc class, the so-called Senior TT, at the Tourist Trophy on the Isle of Man on the BMW 255 Kompressor . During this time he also competed in monoposto car races for Auto Union , for which he came second in the 1939 French Grand Prix .

During the Second World War , Meier was stationed in France and served as the driver of the head of the Abwehr , Admiral Wilhelm Canaris .

After the war Meier tried again in automobile sport . In 1948 he became German Formula 2 champion with Veritas . With BMW-Motorradsport he competed with great success in motorcycle races until his retirement at the end of 1953 and won the German championships in the 500 cc class in 1947, 1948, 1949, 1950 and 1953, before he concentrated on his motor vehicle business in Munich .

Meier was voted Sportsman of the Year in Germany in 1949. He also received the Silver Laurel Leaf on January 31, 1952 from Federal President Theodor Heuss .

Germany's athlete of the year