Michael Detlef Stich (born October 18, 1968 in Pinneberg ) is a former German tennis player and Olympic champion . He won a total of 18 tournaments in singles, including the tournament at Wimbledon and the ATP World Championship , and ten doubles titles.

He learned to play tennis at the age of six and began his career at LTC Elmshorn (German youth champion 1986) and Klipper Hamburg before moving to Iphitos Munich in 1988 and becoming a professional. In 1990, Stich won the Memphis ATP tournament , his first Grand Prix tournament. His breakthrough came in 1991 when he made it into the top ten of the world rankings for the first time after participating in the semi-finals at the French Open in Paris. A few weeks later he achieved his career the biggest success when he at the Grand Slam tournament of Wimbledon defeated the world's elite. He switched one after the other to the newly minted French Open champion Jim Courier (6: 3, 7: 6, 6: 2), the world number one and defending champion Stefan Edberg from Sweden (4: 6, 7: 6, 7: 6, 7: 6) and in the final Boris Becker (6: 4, 7: 6, 6: 4). He is the last male German Wimbledon winner to date. With 74 wins in 100 games that year, he advanced to the top of the world and was fourth in the world rankings . For his achievements shown in 1991, Stich was voted Sportsman of the Year in Germany .

Stich also celebrated great successes in doubles and was already in the top ten in spring 1991 (world number 9). At the side of the former world number one John McEnroe , he reached the semifinals of the US Open in 1992 and previously won a historic final at Wimbledon (301 minutes = longest Wimbledon double final in history) against Jim Grabb and Richey Reneberg with 19:17 in the decisive fifth set . Not only is he the last German Wimbledon winner in singles; For a long time (until Philipp Petzschner's double title in Wimbledon 2010) he was the only German ever to win the double competition in a Grand Slam tournament. Together with Boris Becker, he won the only German gold medal in men's tennis to date at the Olympic Games in Barcelona. For this he and Boris Becker were awarded the Silver Laurel Leaf on June 23, 1993 .

In 1993 he reached the peak of his career when he became the only undefeated world champion of the 1990s at the ATP World Championship in Frankfurt am Main . He beat Pete Sampras in the final in four sets and thus crowned a season in which he won six tournaments and which he finished second in the world rankings - he held this position for a total of 28 weeks.

A year later (1994) he was at the US Open for the second time in the final of a Grand Slam tournament, which he lost to future world number one Andre Agassi .

Stich can also show an extremely successful record in his missions for Germany. In 1993 he led the German team in the 4-1 final victory over Australia almost single-handedly to win the Davis Cup . In addition, he and Steffi Graf won the first title for Germany at the Hopman Cup . A year later, as Germany's top player, he secured the world championship title at the official ATP team world championship in Düsseldorf, together with Bernd Karbacher , Patrik Kühnen and Karsten Braasch after victories against Pete Sampras and Sergi Bruguera . This success made him a two-time world champion.

Then he suffered serious and protracted injuries in the world rankings. At the French Open 1996 he celebrated a comeback as an unset player. He defeated the Austrian Thomas Muster, who was dominant on clay at the time, in four sets and was the first German since Henner Henkel in 1937 to reach the final, which he lost to Yevgeny Kafelnikow in three extremely competitive sets. With his official address at the subsequent victory celebration, he won sympathy in France by being the first foreign player to give it in French.

In the course of his career he was the only German title to have won all tournaments in his home country. In addition to the aforementioned victories in Frankfurt am Main (1993) and Düsseldorf (1994), he achieved a much-noticed success at the German Open at Hamburg's Rothenbaum (1993). He celebrated further tournament victories in Stuttgart- Weissenhof (1991), the Grand Slam Cup in Munich (1992), the Eurocard Open in Stuttgart (1993), the BMW Open in Munich (1994) and the lawn tournament in Halle, Westphalia (1994).

His low point as a professional tennis player was on September 24, 1995 in the Davis Cup semi-final against Russia . In the decisive final match he lost to Andrei Chesnokov with 12:14 in the fifth set after nine on serve match points had been awarded. After a 2-0 lead, secured by Boris Becker against Tschesnokow and Stich against Kafelnikow, the double game was lost. While Becker withdrew his participation in the individual on Sunday, Stich stepped up. Substitute Bernd Karbacher had no chance against Kafelnikow. It followed Stich's defeat against Tschesnokow.

In 2018 he was inducted into the International Tennis Hall of Fame .

Michael Stich, who at that time was one of only seven players (besides him: Agassi, Becker, Michael Chang , Goran Ivanišević , Muster, Sampras) in the first seven years of the 1990s always won at least one individual title per year, finished his career in 1997 at Wimbledon , where he was 88th in the world rankings for the ninth time (six times in singles and three times in doubles) in his career in a Grand Slam tournament in the semifinals. In a five-set match he failed against Cédric Pioline .

During his career, Stich was repeatedly confronted with the fact that he was only the second behind Boris Becker to show success in tennis. In fact, in contrast to Becker, who was one year older, Stich never managed to become world number one; Becker also won six Grand Slam tournaments, stitch only one. Part of almost every interview was therefore the question of his personal relationship with Boris Becker, with whom he became Olympic champion in 1992. A particular curiosity was that the referee in the Wimbledon final in 1991 loudly announced Boris Becker as the winner, although Michael Stich had just won the match (although the referee corrected himself shortly afterwards).

On the other hand, Stich can show successes that no other German has achieved since the introduction of the Open era:

In addition, Stich won several tournaments on clay. Becker was denied any single title on this surface. In addition, in contrast to Becker, Stich is one of only six players (also Sergi Bruguera , Richard Krajicek , Paul Haarhuis , Leander Paes and Roger Federer ) of his generation who have a positive record (5: 4) in direct duels against the former record winner Grand Slam tournaments Pete Sampras can boast.

Career as a functionary 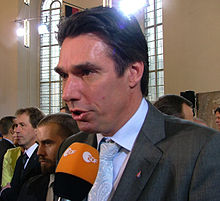 In 1997 Michael Stich was honored by the Federal Association of German Foundations with the German Stifterpreis for his foundation, which he had created from his own income at an unusually young age of 25.

In 1999, Stich was awarded the Georg von Opel Prize for his commitment as a sportsman with social responsibility. In 2002 he took over the position of head of the German Davis Cup team for one year as the successor to Carl-Uwe Steeb . He did not receive a fixed salary, but participated in any success bonuses.

In 2006, Stich first received the Sport Bild Award in the “Best Sports Marketing” category for the Dragon Boat Cup on the Hamburg Inner Alster in favor of the Michael Stich Foundation and was also awarded the “International BAUM” special prize for his social commitment. Michael Stich was named “Hamburger of the Year” in 2007 for his exemplary and social commitment. In 2007 the foundation was also honored for its commitment with the Kiwanis District Prize. In 2008 he received the Federal Cross of Merit on ribbon for his personal commitment to the Michael Stich Foundation, which he founded . In June of the same year, the foundation was named “Selected Location 2008” in the Land of Ideas for its annual Dragon Boat Cup. Also in the same year, the Michael Stich Foundation, together with the advertising agency Jung von Matt, was awarded the “Social Effie” for the “Voice against forgetting” campaign. In addition, Stich was appointed “didacta education ambassador 2008” for the pilot project “Prevention and Education in Hamburg Schools” on HIV and AIDS .

From the beginning of 2009 to summer 2018 he was director of the tennis tournament at Hamburg's Rothenbaum , also here as the successor to Carl-Uwe Steeb. In April 2010, Michael Stich also took over the post of tournament director at the world's largest challenge tournament, the Sparkassen Open in Braunschweig .

Bremen, handprint in the Lloyd-Passage

Michael Stich was married to the actress Jessica Stockmann from September 19, 1992 to September 2003 . Together they adopted a one-year-old Indian girl in November 2000, with whom Stich later had no contact. Two weeks later, they announced that they had been separated since the spring. On June 10, 2005 he married the dressage rider Alexandra Rikowski .

Stich is an avowed fan and member of Hamburger SV . On November 3, 2005, he was 30,000 in the half-time break of the UEFA Cup game against Viking Stavanger . Member honored. A few days later he received a handprint on the Mall of Fame in Bremen.

Michael Stich works for the British TV broadcaster BBC and for BBC Radio 5 Live as a tennis commentator.

He regularly takes part with success in the Black Rock Tour of Champions , a senior tour for former Grand Slam winners and Davis Cup winners. For a while he was still active in the 2nd Bundesliga North together with Henri Leconte for the Schleswig-Holstein tennis club TC Logopak Hartenholm .

Germany's athlete of the year