Traun, who was born in Wandsbek in 1876 , came from a wealthy Hanseatic family ; his father Heinrich Traun owned a company in the rubber processing industry and was Hamburg Senator from 1901 to 1908 . After attending the Matthias-Claudius-Gymnasium , Traun began studying chemistry at the Technical University of Dresden in 1895 . In the autumn of that year he appeared in a city competition in athletics between Berlin and Hamburg and won the race over half a mile .

In 1896 Traun took part in the 1st Olympic Games in Athens. In his favorite discipline, the 800 meter run , however, he was eliminated in the preliminary run as third place with a time of 2: 14.0 minutes. Allegedly he was then persuaded by the Irish John Pius Boland to take part in the tennis competition, who suffered from a lack of international players; according to another account, he spontaneously decided to do so. While he was eliminated in the singles against Boland, the eventual Olympic champion, in the first round, both moved directly into the final in doubles after a victory in the first round and a subsequent bye, which they against the Greeks Dionysios Kasdaglis and Dimitrios on April 9th Petrococci cinemas won.

In 1897 he was the first German to reach a distance of over 6 meters in the long jump in Baden-Baden .

In 1899, Traun received his doctorate with the title On Knowledge of Dibrommesitol bromide and its conversion products with the top grade summa cum laude . In 1900 and 1901 he worked as a scientist at the Paris Sorbonne and then joined his father's company. From 1902, Traun spent a year in the USA on business. First he inspected a branch of the company on Long Island . In the winter of 1902/03, Traun fell ill with tuberculosis , from which he never fully recovered. He met with Carl Schurz , on whose advice he spent the following spring in a spa hotel in Augusta and returned to Hamburg in the summer of 1903. Traun spent the following years on spa stays in St. Moritz and Davos , where he gained experience as a bobsleigh driver and in 1904 set a track record on the Cresta-Bahn in St. Moritz.

After he was increasingly excluded from active sports due to his illness, Traun worked as a sports journalist and organizer. In 1906 he acted as tournament director at the Hamburg tennis championship tournament, in 1907 as its head referee. In the same year, Traun met Friedel Preetorius, daughter of the wealthy Mainz entrepreneur Wilhelm Preetorius , at the Kiel Week . In March 1908 both married to great public attention; the honeymoon took her to Algiers in Traun's car . Afterwards the couple lived in the posh "Park Hôtel Teufelsbrücke" in Hamburg- Altona until the planned completion of their property . 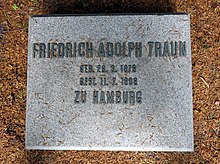 On the morning of July 11, 1908, a young woman entered the hotel and claimed to be married to Traun and even to have children with him. The exact circumstances could never be clarified; Following the meeting, Traun shot himself in the bathroom of his apartment.

Friedrich Adolph Traun was buried in the area of ​​his family's grave at the Hamburg cemetery Ohlsdorf , grid square AC 18, 1-28 (southwest of chapel 7).