The first "Championnat de France international de Tennis" (the international tennis championships of France) took place in Paris in 1891 . The first winner in the men's singles was the Briton H. Briggs . The women were allowed to compete for the first time in 1897. Until 1925, the start of the tournament was reserved exclusively for French and a very limited number of selected foreign athletes. In these first decades, grass was played and the venue changed between the “ Racing Club de France ” and the “ Stade Français ”. In 1928 a new tennis stadium was built near Porte d'Auteuil in the course of an upcoming Davis Cup dispute . It was named after Roland Garros , a fighter pilot who was revered in France as the hero of the First World War . For the first time the surface was chosen as the surface that is still considered the defining trademark of the French Open, gives the tournament its specific charm and poses very special challenges for the player: terre battue - the slow "red ash" made of ground bricks that Forcing the player to patiently build the game and making network attacks more difficult. The Stade Roland Garros was opened on May 19, 1928 with a women's international match.

In the beginning, the tournament - like the Olympic Games - was reserved exclusively for amateurs. Since 1968, the beginning of the so-called “ Open Era ”, the history of the “Open Championships”, all players have been allowed to start. In 2000, Mary Pierce became the last French woman to win the French Open. Since 2006 the French Open has already started on Sunday. The number of games this Sunday has increased from 16 (2006) to 24 (2007) and now to 32 (2008).

In 2010 the French Open was broadcast in 3D for the first time and could also be seen in three dimensions in public places. The tournament was the first sporting event to be publicly viewed in 3D.

Due to the significantly lower capacity of the facility, however, a move for the French Open is being discussed. Compared to other Grand Slam tournaments, the Paris area is not even half the size and the audience capacity is significantly smaller. However, expansion plans have so far failed because of the residents and environmentalists.

The 2020 tournament on March 17th was postponed from May 24th to June 7th in the autumn of the year to September 20th to October 4th due to the COVID-19 pandemic in France . In April the tournament was postponed for another week. From September 27th to October 11th the game will be played in Paris. If necessary, the organizers would hold the French Open without a spectator. This could enable part of the business model, the service of television rights, according to Bernard Giudicelli, President of the French tennis association FFT. More than a third of the funding for the French Open comes from broadcasting rights. At the beginning of May, the organizers announced that they would be reimbursed for tickets that had already been purchased. 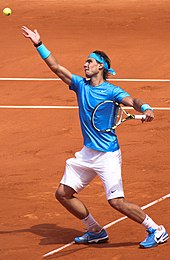 From Austria, Thomas Muster was successful in men's singles in 1995.