The Piaggio MP3 is a three-wheeled large scooter from the Italian vehicle manufacturer Piaggio .

With the Piaggio MP3, a new vehicle concept was presented in 2006, which has two tiltable front wheels - comparable to a pendulum carriage - and a conventionally driven rear wheel as a special feature . There were initially three engine variants with 125, 250 and 400 cm³ available. Later 300 and 500 cc engines replaced the 250 and 400. The two front wheels are at a distance of 420 mm from each other, are connected to the frame by a complex parallelogram suspension and enable a curve inclination of a maximum of 40 degrees. This gives the vehicle better stability and largely prevents it from tipping over on slippery surfaces. Thus, the MP3 is better suited for bad weather conditions than a single-track vehicle. The three tires also provide greater grip than a two-wheeler, which can enable a shorter braking distance without having to forego the driving dynamics of a scooter.

The distance between the front wheels was chosen so that the MP3 can be registered as a single-track vehicle or as a multi-track vehicle with minor modifications. In the factory, the RL variants were available from 2006 as a scooter (125 RL, 250 RL and 400 RL) and the LT variant (LT 250, LT 400 and LT 300 YOURBAN) as a multi-lane motor vehicle from 2009. The LT version has in addition to the brake levers a brake pedal that can be used to brake all wheels, differently mounted front indicators and a different front parking light to meet the legal requirements for multi-lane vehicles. Versions with 493 cm³, 330 cm³ and 278 cm³ are currently available.

In the first six months after the market launch, over 10,000 units were sold.

In 2007 the technically largely identical Gilera Fuoco 500ie ( Italian for fire ) was introduced. It had a more powerful engine (40 hp) and looked "sportier". However, the track width of the front wheels was 2 cm too small for approval as a multi-lane motor vehicle.

In autumn 2009, Piaggio introduced the MP3 as the first hybrid motor scooter . Here the 125 cm³ engine is supported by an electric motor integrated into the drive arm. The lithium-ion battery placed in the helmet compartment under the seat bench can be recharged while driving in push mode and separately from a socket. The range is supposed to be up to 60 km per liter of petrol “when the route is covered with two thirds in hybrid mode and one third in electric mode”; the acceleration values ​​should be better than with the normal models.

With the 2015 model year, traction control (ASR) that can be switched off and the 3-channel ABS from Continental were introduced. In addition, the diameter of the front tires has been increased from 12 "to 13".

An electric reverse gear is optionally available with the 2020 model year. This creates 2-3 km / h with a maximum of 18% gradient (15% with a passenger). 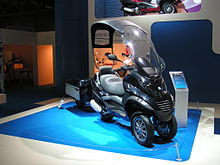 Piaggio MP3 with roof and trailer

According to EU Directive 2006/126 / EC , a motorcycle license - class A1 for up to 15 kW or class A for more than 15 kW engine power - has been required to drive the MP3 since January 2013. The multi-lane variant LT has since counted as a car, while the variant RL is treated as a motor scooter, but for reasons of continuity it can also be driven with a class B driving license, provided that the driving license was issued before January 19, 2013.

This regulation was later relaxed for Germany - not the entire EU: Class B, which was acquired on January 19, 2013, now again includes driving three-wheeled vehicles in Germany (code number 194). If the motorbike has an engine output of more than 15 kW, this authorization only applies if the driver's license holder is at least 21 years old. For buyers of class B after December 27, 2016, Section 6 (3a) of the FeV applies.