from Wikipedia, the free encyclopedia
This is the spotted version , flagged on July 31, 2020 . There is 1 pending change that has yet to be viewed.

Speedway driver in the typical drift on the dirt track (Extra Liiga, Finland)

Start of a speedway race

According to the Maitland Mercury Newspaper, the first documented speedway races took place on December 15, 1923 in Maitland in New South Wales ( Australia ). However, before the First World War , there were some motorsport events of this kind in the USA and Australia . In the United States, for example, small races with motorcycles were held on dirt roads before the First World War . The two Australians Billy Galloway and Keith McKay came to Europe in 1928 to establish the Speedways sport, which was already popular in Australia. They organized the first official speedway races in Great Britain with motorbikes without brakes on oval-shaped tracks with sandy ground. In England the first speedway leagues developed and races were held in large stadiums such as Wembley Stadium .

The Star Riders' Championship , the forerunner of today's world championship , also developed in England . However, the English drivers were far inferior to the American and Australian drivers, which is why they drove in two separate groups.

Brief information about the sport

Speedway races take place on a flat, oval track with a subsurface made of sand-lime brick. According to the official definition, it is a "covering made of granite, slate, brick granulate or similar unbound material on a solid earth subsurface". The racing drivers lay their machines sideways in the curves (so-called powersliding ), with the rear wheels "swinging" outwards and steering them around the curves with the front wheels.

In a speedway race, four or six drivers start simultaneously in a standing start. Your motorcycles must weigh at least 80 kilograms , have no brakes and only one gear. The engines are 500 cc single cylinder four-stroke engines with methanol as fuel. Speeds of up to 130 km / h can be achieved on the straights.

A four-lap race with a track length of 300 to 400 meters takes about one minute.

The most important speedway competition is the Speedway World Championship , which has been held in the Grand Prix system since 1995. The driver who collects the most points in the Grand Prix races over the entire season can call himself world champion in the end.

Speedwaysport is now most popular in Poland , Great Britain and Scandinavia . In Germany , Belgium and the Netherlands , on the other hand, long track races (over 425 meters) are more popular, which do not require as much technical skill from the drivers, but more endurance.

In Germany there is a Speedway Bundesliga where the German club champions are driven out. In addition, German individual championships for professionals and U-19 and U-21 championships are held every year. Speedway riders usually take part in several leagues at the same time. This is possible because not every team has a race day every weekend. The drivers are often members of several teams in different countries. This means that the speedway drivers almost always have a full schedule, because in addition to the league races, there are also various cup competitions for the league teams, national and international championships and other invitation tournaments in which the drivers take part. It is also very common for drivers to change teams frequently. Contracts that run for more than three years are rather rare. There are the following classes: Juniors A (50 cm³), Juniors B (125 cm³), Juniors C (250 cm³) and U19 (500 cm³, drivers under 19). For these drivers, the German championship is divided into nbm (North German Railway Championship) and sbm (South German Railway Championship).

Average speeds are around 75 to 80 km / h. On the straights, speeds of 110 to 120 km / h are reached, depending on the length of the straights - although it must be borne in mind that the track sports motorcycles (speedway) have neither brakes, rear wheel suspension nor gears. After the start, the drivers accelerate their racing machines to 100 km / h in just over five seconds. Sand track machines have two gears, with the first gear only being used when starting. 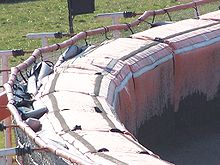 The safety band of a speedway track in Poland

All official tracks are inspected by representatives of the FIM . The FIM has the overall supervision of all railways and lays down the regulations on the construction, the size and the safety requirements of the railways.

Speedway lanes have a length of 260 to 450 meters. The length is measured at a distance of one meter from the inner edge of the track. The track length is therefore not the length of the ideal line, but the shortest route. The start and finish line is usually in the middle of a straight line, but it can also be 35 meters away from the exit of a curve. In addition, warning systems in the form of traffic lights (in the event of an accident and the associated termination of the race, the red lamps light up), a floodlight system and a modern start system must be available.

The underground of a speedway track consists of four layers, each of which may not be more than seven millimeters thick. Ground slate is applied as the top layer . This is followed by layers of granite , granulated bricks or other loose materials. The use of asphalt, concrete or other hard materials as stabilizers is strictly forbidden, if only because of the high risk of injury. During an event, the runway is often watered to keep dust as low as possible.

The minimum lane width is ten meters. This means that the riders have enough space at every point on the route to safely steer their motorcycle. There is no maximum lane width. With this regulation, the FIM guarantees that not only "normal" speedway races can take place on speedway lanes, but also other events such as sidecar races.

Furthermore, a speedway stadium must offer enough space for the motorcycles that are not currently in use. The garage area is usually outside the actual stadium, but rarely inside the track or in the catacombs under the grandstands (e.g. at speedway events in football stadiums). Press areas, medical facilities, safety fences in front of the spectator seats and well padded boards are also mandatory.

Stadium with sand track in Haunstetten

The motorcycles are very sparsely equipped and designed precisely for their purpose. The FIM has laid down the rules for motorcycles in the “Track Racing Technical Rules” (in German: “Technical rules of rail sports”).

Special features of these machines are the single-cylinder, four-stroke engines used, which are narrow and lightweight. The motorcycles must weigh more than 77 kg. The engines usually have a displacement of 500 cubic centimeters and, depending on the configuration, an output between 60 and 80 hp. Mostly the air-cooled engines from GM and Jawa are used. The fuel used is methanol , which burns almost residue-free to form water vapor and carbon dioxide . The speedway motorcycles are built without a gearbox . There is only one coupling between the motor and the rear wheel and one sprocket reduction between the motor and the coupling and another between the coupling and the rear wheel. Adjustments to track lengths and properties are made by changing the gear ratio by changing a sprocket and adjusting the clutch. Long-track motorcycles, on the other hand, have two gears, whereby the first gear is only intended for starting and is shifted up shortly after the start. There are no brakes on these special machines, only the motor brake is used to brake .

The seat height is relatively low and the handlebars are wide. The very short footrest on the left is only used for relief on straights, as the inside foot is sometimes placed on the ground in the curves.

Sidecar races are operated with sidecar motorcycles with a sidecar on the right. Until the 1980s, the incline of the motorcycle could be adjusted to the curve radius by the passenger using a crank while the race was running . These were the so-called “swivels”. The inclination of the machines is currently fixed for safety reasons.

The speed karts are converted series kart chassis with a rail or road engine. They go up to 650 cm³ and approx. 75 kW and reach a top speed of over 160 km / h.

Four drivers line up behind the start belt parallel to each other. The race is on as soon as the tape lifts. False starts, as well as self-inflicted falls, are punished with immediate exclusion from the race. It is driven counter-clockwise .

There are usually three points for winning a race (in the four-man speedway), two for second place, one for third and zero points for fourth.

The Fédération Internationale de Motocyclisme (FIM) is responsible for the set of rules .

For the best club teams there is the Speedway Europe Cup , similar to a European Cup for national champions.

The Millennium Stadium , during a Speedway Grand Prix

In Germany there is a Speedway Bundesliga , through which the national team title is awarded. In addition, an individual championship and an U-21 championship are held annually. In 2012, a 2nd Bundesliga was also founded, which is advertised as a Team Cup . This league is considered the youth league.

The 1st Speedway Bundesliga consists of 6 teams (as of 2015). Each team competes in two home and two away races throughout the season. In addition, there are two finals at the end of the season, in which the two teams with the highest points compete against each other (one home and one away race). In every race the home team competes against an away team. This means that two drivers from both teams start each race.

The Speedway Team Cup was held for the first time in 2012. In the first season 6 teams started. Each of these teams contests a home race. Unlike in the 1st Bundesliga, 4 teams compete against each other on each race day. This means that one driver from each team starts each race. Another difference to the 1st Bundesliga is that each team competes with a 250 cm³ driver in addition to their 500 cm³ drivers. The four 250 cm³ drivers always compete against each other in each race.

In Great Britain there is a distinctive league system, the upper house of which forms the Speedway Elite League . Below it are the Speedway Premier League and the Speedway National League . There are also cup competitions.

Individual British championships are held for professionals, U-21 and U-18 drivers.

The only German speedway world champion is Egon Müller (1983 in the Halbemond stadium near Norden ).

Speedwaysport is rather unknown in Germany, mainly due to the lack of international success. Unlike in other European countries, other rail sports , such as B. the grass track sport , not as well known as speedway. In addition, the environmental problem in speedways sports is unsolved. Many railways lie idle because speedway is associated with exhaust fumes and noise. Lately, new technologies are trying to renew the sport. Electric speedway machines should help to give the sport new impetus and new fans.