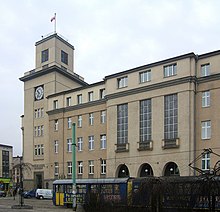 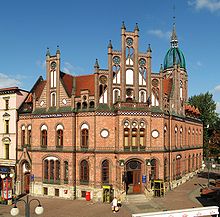 The city of Chorzów is divided into the following districts:

Founding of the hut and the city

In 1797 the eponymous Königshütte was founded as a Prussian state enterprise. It was one of the first smelting works operated with steam power on the European continent. A blast furnace pierced in 1802 was the largest in Europe at the time. In 1871 the company became part of the United Königs- and Laurahütte . Adolph von Menzel traveled to Königshütte in 1875 to study for his painting “Das Eisenwalzwerk”.

The municipality of Königshütte in the Upper Silesian district of Beuthen was founded on July 17, 1868 from the estate district Königshütte, Hüttenwerk , Kolonie Erdmannswille, Charlottenhof and parts of the rural community Chorzow and the estate districts Ober Heiduk, Mittel Lagiewnik, Ober Lagiewnik and Schwientochlowitz . The publication of the royal decree for the elevation of the city by the head president of the province of Silesia took place on April 17, 1869. On March 9, 1869, the former mayor was appointed the first acting mayor of the newly founded city. D. Lange from Bernau was appointed and his full successor a year later was Judge Goetz.

Coordination and connection to Poland

But because there was a majority of votes in the district of Katowice surrounding the city for the connection to Poland, the town of Königshütte OS was ceded to Poland together with the district of Katowice on June 19, 1922, because otherwise it would have become a German exclave in Poland. Königshütte OS has now received a Polish translation of the old name: Królewska Huta . Almost all of the time until 1939 there was a German majority in the city council.

On April 1, 1934, the rural community Chorzów and in 1937 New Heiduk (Nowe Hajduki) were incorporated into the town of Królewska Huta, which at the same time assumed the new name Chorzów . Since then, the municipality of Chorzów has been called Chorzów Stary (translated Old Chorzow). On April 1, 1939, the urban area was further enlarged by the incorporation of the rural communities Wielkie Hajduki, Kochłowice (partially) and Świętochłowice (partially).

Since October 26, 1939, Chorzów - now again called Königshütte (without the addition "OS") - belonged to the district of Katowice in the Prussian province of Silesia, and from 1941 to Upper Silesia.

From Chorzów Jews by the German authorities as part of from 1939 Nisko Plan deported .

On January 27, 1945, the city was captured by the Red Army and returned to Poland. As a result, there were riots, excesses, expropriations of property without compensation, forced labor, deportations, resettlements and expulsions of the German population of Königshütte.

Members of the German minority still live in the city today . In 1955 the Silesian Planetarium was built in the city. The city has as the whole region around Katowice with the consequences of the 1989 ongoing structural change (decline of coal mining and heavy industry ) such. B. Fight unemployment and pollution .

On January 29, 2006 at around 5.15 p.m., the roof of an exhibition hall collapsed. At the time of the accident, around 700 people attended a pigeon fancier exhibition that attracts more than 12,000 visitors every year. The accident cost the lives of 65 people, and a further 160 people were injured and rescued from the rubble.

A city ​​president is at the head of the city administration . Since 2010 this has been Andrzej Kotala ( PO ). The 2018 elections brought the following results:

Kotala was thus re-elected in the first ballot.

Entrance to the zoo

Before the First World War

Logo of the MTV Königshütte

The beginnings go back to 1862, when the first gymnastics club, later the men's gymnastics club ( MTV ), was founded on July 10th by the ironworking machine master Angele. The carpenter Carlitzek became the first chairman. First, the club did gymnastics in a hall of the Hotel Wandel on Kattowitzer Strasse, and on July 13, 1895, they moved into their own newly built gym with an athletics and ball playground on Parkstrasse. On August 22nd, 1875 the 1st Upper Silesian Gauturnfest took place in the city with over 200 participants. The board of directors of the association included the factory owner Paul Sonsalla and the treasurer Czajor.

In 1891, the teacher Alker began with his students in school No. 7, which was in the working-class district, with daily exercises in the school yard. Three years later, in the municipal school deputation, the youth game was decided as part of physical education in schools. Over time, the proportion of students and teachers who took part grew, both during and after class. In order to make the youth game even better known, game festivals were held every year in the municipal park on the Redenberg with the active participation of the audience. The 1st mayor Mr. Stolle and the school inspectorate supported this development. This finally led to the foundation of the first sports club in 1901, under the name Spielvereinigung 1901 Königshütte . Sports that were practiced from the start included fistball, drum ball, batting, and hiking. Football was added later, before 1912. The teacher Pompa was the leader. Since this club did not have its own sports field, it merged with SC 08, founded in 1908, in December 1923.

On August 22, 1910, the most famous Königshütte club, the Association for Lawn Games ( VfR ) , evidently emerged as a spin-off from MTV . A member of the MTV , the Austrian Kurt Pallavicini, contributed significantly to its establishment . The reason for this is probably the lack of a football department at MTV . The club colors of the VfR were “red-black” and the playground was between Hummerei- and Annenstraße. The accounting officer Ganz became the first chairman. In addition to football, there has been a tennis and athletics department since it was founded.

During the First World War, the entire sporting activity was largely inactive.

In order to be allowed to participate in the game , the German clubs had to be Polonized after the annexation of Eastern Upper Silesia , including the city of Königshütte to Poland in 1922. This happened by changing the name, replacing the German board members, merging with or taking over by the Polish clubs. The VfR was renamed AKS after it started playing as a member of the newly founded German Voivodeship Football Association . The game association in 1901 changed its name to Zjednoczone Przyjaciele Sportu . The Bismarckhütter Ballspiel Club ( BBC ) in turn merged on January 7, 1923 with the Ruch to form Ruch BBC Wielkie hajduki . At the same time, the German Catholic youth movement formed new sports clubs, known as Jugendkraft . New Polish clubs such as KS Śląsk , KS Kresy , KS Polonia and the Association of the Polish Military were also established.

In 1926, a new stadium was built on Redenberg , which was inaugurated on October 2, 1927 by Polish President Ignacy Mościcki . His complex included a soccer field with a cinder track, a smaller sports field, a club building, a swimming pool, a tennis court, a grandstand with around 100,000 seats, a cricket ground and a parade ground.

On January 6, 1928, a new club, the KS Stadion with the departments, football, athletics, swimming and tennis was founded.

The only German tennis club in East Upper Silesia, the Lawn Tennis Club ( LTC ), was located in Königshütte .

At Chorzów Batory station, the Chorzów – Tczew line branches off from the Katowice – Legnica line and then passes through the Chorzów Miasto and Chorzów Stary stations.

In public transport there is a connection to the Upper Silesian tram network .

Other people connected to the city