Żory [ ˈʐɔrɨ ] ( German: Sohrau ) is a city with around 60,000 inhabitants in the southwestern part of the Polish Silesian Voivodeship . 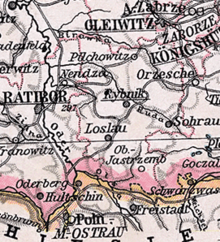 Houses on the Ring 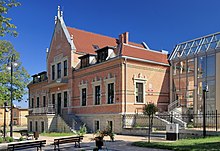 Nepomuk column on the ring

Żory is divided into the following districts:

Around 1783 the city was surrounded by a wall, but the alleys were not yet paved, but covered with uncut wood. In 1782, Frederick II provided the town with construction aid amounting to 12,850 Reichstalers for the construction of six new buildings and for the settlement of ten cloth makers and other skilled workers. In the 18th and 19th centuries, linen weaving was of great importance to the city. The iron and machine industry took its place in the 19th century.

In 1818 the city became part of the newly formed Prussian district of Rybnik .

At the beginning of the 20th century Sohrau had a Protestant and a Catholic church, a synagogue , an iron foundry and machine factory, a wool weaving mill, two sawmills, a grain mill, two brick factories, an electricity company and was the seat of a local court .

When the Wehrmacht invaded Poland on October 26, 1939, the city was captured and the synagogue was destroyed . On March 24, 1945, the war-torn city was captured by the Red Army . Most of the German population was expelled in the following years. Due to the closings of collieries and smelters, there is high unemployment today.

Number of inhabitants to date

Żory has partnerships with the following cities:

People connected to this place

The A1 motorway runs west of the city center .