The title of this article is ambiguous. Further meanings are listed under Jaworzno (disambiguation) .

The main square in Jaworzno 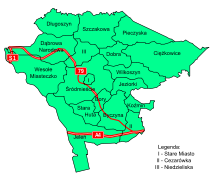 Jaworzno ( [jaˈvɔʒnɔ] ? / I ) is a city in the Silesian Voivodeship in the southern part of Poland . It is located about 20 kilometers from Katowice and about 55 kilometers from Krakow . In the district of Szczakowa is the Jaworzno Szczakowa passenger and marshalling yard , which emerged from the Szczakowa station of the Kraków-Upper Silesian Railway opened in 1847 and the Granice terminus of the Warsaw-Vienna railway opened in 1848 on the then Austrian - Russian border.

Jaworzno was first mentioned in 1242 as Iavorno when it was attached to the estate of the city of Sławków of the Kraków bishops . The village was on the trade route Kraków - Bytom . In the 13th century, the place most likely belonged to the castellany of Chrzanów , which according to some researchers belonged temporarily to the Silesian Duchy of Opole .

The parish of the Krakow Diocese was founded in 1335.

Lead ore was mined in the area from the 12th to the end of the 16th century . In 1767, the first coal mine in what was then Poland was opened in neighboring Szczakowa , the beginning of what would later become Zagłębie Krakowskie (Krakow Mining District). In 1788 Jaworzno and some of the surrounding villages, formerly owned by the Bishop of Cracow, came under the control of the Polish state. After the third partition of Poland and after the annexation of the Free City of Krakow , Jaworzno belonged to the Austrian Empire (in the Chrzanów district ), from 1901 as a city.

When the Danube Monarchy collapsed, Jaworzno came to the Second Polish Republic and was assigned to the Powiat Chrzanowski of the Krakow Voivodeship . In 1939 Jaworzno was conquered by the Wehrmacht during the German attack on Poland and incorporated into the newly formed Krenau district in the new " Eastern Upper Silesia ". It was planned to give the city a German name and rename it Arnshalde , but this was not carried out until the end of the war.

From June 1943 to April 1945 the concentration camp of the SS Neu-Dachs labor camp was located in Jaworzno . The facility was then run as the Jaworzno Central Labor Camp of the Polish Ministry of Intelligence until 1956 . Many of the victims of both regimes are still anonymously buried here or buried in mass graves that are only partially marked.

After the war, Jaworzno was enlarged by some incorporations and remained in the Kraków Voivodeship until 1975, in the Katowice Voivodeship from 1975 and in the Silesian Voivodeship from 1998. However, the majority of the city's residents continue to identify with the historical landscape of Malopolska , understanding the economic ties with Upper Silesia .

In 2014 a roundabout was named after the guitarist of the US thrash metal band Slayer in "Rondo Jeffa Hannemana", who died a year earlier .

At the head of the city administration is the city ​​president . Since 2002 this has been Paweł Silbert (election committee “Jaworzno my city”). He was supported by the PO and the PiS in 2006 and 2010 and by the PiS in 2014 and 2018. The regular election in October 2018 led to the following results:

Silbert was thus re-elected in the first ballot.

Sons and Daughters of the City (chronological)