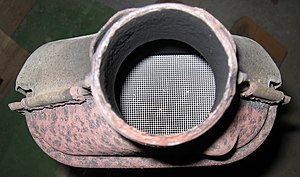 Vehicle catalytic converter with honeycomb body made of ceramic

Later, John J. Mooney and Carl D. Keith developed the three-way catalyst at Engelhard Corporation , which launched it in 1973. Since a gasoline engine has significantly higher emissions than a diesel engine and gasoline engines were predominantly used in the pioneering state of California, vehicle catalysts were first introduced in gasoline engines.

Task and mode of operation

The task of the vehicle catalytic converter is the chemical conversion of the combustion pollutants hydrocarbons (C m H n ), carbon monoxide (CO) and nitrogen oxides (NO x ) into the non-toxic substances carbon dioxide (CO 2 ), water (H 2 O) and nitrogen (N 2 ) by oxidation or reduction . Depending on the operating point of the engine and under optimal operating conditions of the catalytic converter, conversion rates close to 100% can be achieved. In exhaust aftertreatment, in addition to the gaseous pollutants, soot and particles must also be reduced, see diesel soot particle filters and Otto particle filters .

Since the optimal catalytic activity is only available in a certain temperature range, both the design of the exhaust system and the operating strategy can significantly influence the effectiveness. In particular, achieving the conversion quickly after the vehicle has started has a significant impact on overall emissions.

Rhodium , a possible component of catalysts.

The vehicle catalytic converter usually consists of several components. A temperature-stable honeycomb body made of ceramic, usually cordierite or metal foils (e.g. metalite ), which has a large number of thin-walled channels, serves as the carrier . The so-called washcoat is located on the carrier . It consists of porous aluminum oxide (Al 2 O 3 ) and is used to enlarge the surface. Due to the high roughness , a large surface of up to several hundred square meters per gram is achieved. The catalytically active substances are stored in the “washcoat” . These are different depending on the type of catalyst. In modern three-way catalysts, these are z. B. the precious metals platinum , rhodium or palladium or a combination of these. The ceramic carrier is stored in a metallic housing, known as "canning", by means of special storage mats, the so-called swelling mats, made for example from high-temperature wool , more rarely in combination with wire mesh.

In a regulated three-way catalytic converter (also called G-Kat), the oxidation of CO and C m H n and the reduction of NO x take place in parallel: C m H n with O 2 become CO 2 and H 2 O oxidizes, CO oxidizes with O 2 to CO 2 and NO x reduces with CO to N 2 , or CO oxidizes to CO 2 .

The prerequisite for this is a constant stoichiometric fuel ratio (λ = 1) of 14.7 kilograms of air per kilogram of premium gasoline (95 octane) and 14.8 kilograms of air per kilogram of regular gasoline (91 octane). For ethanol fuel, the stoichiometric ratio is 9: 1. Even a slight deviation in the lean range (λ> 1; excess air) causes a sudden increase in nitrogen oxide emissions after the catalytic converter, since too little CO is available for the reduction. The mixture is therefore regulated between the stoichiometric and slightly rich ratio. The three-way catalytic converter can only be used in vehicles with petrol engines and lambda control based on a lambda probe . In order to be able to buffer small and short-term deviations from λ = 1, oxygen storage components such as cerium (IV) oxide are used.

In the early days of catalytic converter technology, uncontrolled catalytic converters were also used, particularly in inexpensive vehicles with gasoline engines. The composition of the air-fuel mixture was not regulated by a lambda probe, but rather the exhaust gas flow was passed through the catalyst block. Accordingly, the nitrogen oxide breakdown in the frequently used part-load range of the engine, where a lean mixture (excess air) provides sufficient driving performance and a corresponding mixture composition was preferred in the vehicle design for reasons of fuel savings, was correspondingly worse. In particular in the engines with carburettors that were predominantly present up to the end of the 1980s , the design of the air-fuel mixture was not possible with the same precision as in engines with intake manifold injection , which has therefore become established in vehicle construction since then.

For motorcycles (as of 2018) are also today still partially unregulated catalysts; In the case of small motorcycles in particular , the technical and economic outlay for a regulated catalytic converter is often not worthwhile. The exhaust regulations allow significantly higher emissions.

Diesel engines do not burn a prepared fuel-air mixture. The fuel is added to the compressed air inside the engine. The combustion itself is only locally stoichiometric or even with a lack of oxygen. Since the fuel is not evenly distributed, the entire combustion leads to a high excess of air and thus to λ  > 1. There are therefore high oxygen concentrations in the exhaust gas. Thus, the reduction of NO x is not possible as with the three-way catalytic converter. However, C n H m and CO emissions can be reduced by using an oxidation catalyst. The oxidation reactions proceed in the same way as with the three-way catalytic converter. Due to the significantly lower exhaust gas temperatures compared to gasoline engines, diesel oxidation catalytic converters are often installed close to the exhaust manifold , the washcoat only contains platinum or palladium or a combination.

The NO x minimization of diesel engines can initially take place through internal engine measures, i.e. the targeted influencing of the combustion, for example through partial exhaust gas recirculation . However, this is only possible within narrow limits, since otherwise the soot emissions will increase and the engine output will decrease. Today, the increased use of NO x storage catalytic converters or SCR catalytic converters is reducing NO x emissions from diesel vehicles.

More recent work deals with the use of perovskite in vehicle catalytic converters for diesel engines that are operated with excess oxygen in order to improve their efficiency. The oxygen contained in the exhaust gas prevents the use of conventional catalytic converters. The doping of perovskite-containing catalysts with palladium increases the resistance to poisoning by sulfur.

Also, two-stroke gasoline engines , as they are for example installed today in motorcycles with small displacement can be equipped with an oxidation catalyst. An oxidation catalytic converter can reduce CO emissions and the C m H n emissions, which are considerable in two-stroke gasoline engines . There are retrofit oxidation catalytic converters for older vehicles with two-stroke petrol engines, such as the Trabant . However, these were hardly used because they were technically not sufficiently mature and had an uneconomical price. In general, however, the pollutant emissions of two-stroke engines cannot be reduced as much compared to gasoline and four-stroke diesel engines due to the flushing losses (high proportion of fresh gas in the exhaust gas) and the combustion of oil (when flushing the housing). However, the working principle of the two-stroke engine with a rather low combustion temperature also means that significantly less nitrogen oxides are produced from the outset than with the four-stroke engine.

Modern lean-burn gasoline engines work with an excess of oxygen to increase engine efficiency. Conventional catalysts can therefore not be used. The oxidation of CO and C m H n is still possible in the oxygen excess (λ> 1) similar to the conventional three-way catalytic converter, but more nitrogen oxides (NO x ) are produced. Their catalytic reduction is only possible in a stoichiometric to rich exhaust gas mixture. These new engines therefore require a further developed type of catalytic converter with additional chemical elements that enable the intermediate storage of nitrogen oxides. In order to comply with the current emission standards, diesel cars are also equipped with NO x storage catalysts.

A noble metal catalyst such as platinum and a NO x storage component, which is usually a compound of an alkaline earth metal such as barium carbonate or barium oxide , are applied to suitable supports . In the lean, i.e. oxygen-rich, atmosphere, the nitrogen oxides are bound under the action of the noble metal catalyst in the form of nitrates such as barium nitrate and are thus removed from the exhaust gas flow. Due to the regular short-term "enrichment", these reactions take place in the opposite direction, whereby the NO x molecules are released back into the exhaust gas flow and through the reducing components present in the rich atmosphere such as C m H n - incompletely burned hydrocarbons - and / or CO can be reduced again - ideally to N or N 2 . The storage catalytic converter can only store NO x in a temperature range of 250 to 500 ° C. This temperature window is achieved by three-flow exhaust pipes or exhaust bypasses.

Another method for reducing nitrogen oxides is selective catalytic reduction . The standardized aqueous urea solution AUS 32 is continuously injected into the exhaust gas flow , for example by means of a metering pump . There the urea reacts with the nitrogen oxides in the exhaust gas on the SCR catalytic converter in a redox reaction to form elementary nitrogen (N 2 ) and water. The SCR process is now used in numerous passenger and commercial vehicles with diesel engines, primarily to comply with the exhaust gas limit values ​​according to Euro 4, Euro 5 and Euro 6.

By drastically shortening the cold-running phase , the emissions of the vehicles could be reduced considerably. The cold start phase can be shortened by the following measures:

In most production vehicles, the close-coupled catalytic converter arrangement has established itself as this is the most cost-effective and fuel-efficient method.

As a retrofit solution (primarily for older vehicles with standard Euro 1 classification), so-called upgrade cats were offered in the 1990s. In addition to the effect of better environmental compatibility both in the cold-running phase and in the warm operating state (in contrast to the cold-run controller), this was usually also associated with a classification in a better emission class , which in some cases could result in significant savings in vehicle tax .

In order to comply with future, even stricter exhaust gas limits, various development steps are currently necessary for the catalytic converters:

Since 1996 in California and subsequently also in the EU, vehicle catalytic converters have to be monitored by a diagnostic system. If the catalytic converter malfunctions, the driver will be prompted to visit a workshop with the engine control lamp .

A small proportion of precious metals from the catalytic converters is released into the environment and can be detected on the roadside. The load on very busy roads is a few µg / kg in the dry grass mass. A study from 2003 came to the conclusion that yield losses and impaired growth in crops were not to be expected and that the concentrations determined were "not yet relevant for human health."