The title of this article is ambiguous. Further meanings are listed under Concern (disambiguation) .

The term worry describes a relationship of the human subject to his environment and himself, characterized by forward-looking concern . Subjectively expected need ( need , danger ) is anticipated and affects the feeling , thinking and acting of those concerned or worried. The spectrum ranges from being internally worried or frightened to active concern for or about something.

In common parlance, the worry is primarily a more or less concrete, sometimes long-lasting fear or emotional distress. The word is often used in the plural with this meaning , for example: "I am worried ..." Persistent serious worries can also be described as grief .

In addition, caring for something or someone (also caring ) refers to a relationship of responsibility between people or living beings in which a carer takes care of another being entrusted to him (e.g. a pet , a child or a person in need) ( see e.g. motherly love , see also custody ).

In the phrase "to take care of something" (cf. also "take precaution "), which is more in the written language, care can be understood in a third meaning as the willful bringing about or favoring a desired target state and corresponds to the general language "to ensure that ... "Or the more colloquial" take care that ... "

Although other languages ​​sometimes use different terms for the sorrowful concern , the caring concern and the simple worrying of things or affairs (cf. for example the English verbs to worry , to provide for and to procure ), the close conceptual connection between these nuances of meaning is reflected Conceptual concern is not only reflected in German. The Latin root cura includes all three meanings.

Whoever takes the contrary worry little or no, is carefree , careless or reckless called.

Everyday worries (English worries ) are at least occasionally present in almost all people. The psychologist TD Borkovec u. a. define worry as a chain of thoughts and ideas ( chain of associations ) associated with negative feelings (1983). This is a shift in attention to fears and possible negative consequences.

Unrealistic worries are perceived as pathological if they are experienced as uncontrollable. Often these are characterized by hypervigilance and restricted attention . The affected person feels restless and unable to relax until the nagging worry is the focus and can be transferred to other situations ( generalized anxiety disorder ).

According to an old fable of Hyginus , by order of Saturn, Jupiter should receive his spirit and Tellus (earth) his body after the death of man ; as long as he lives, however, he should be worried.

In philosophy , the concept of care became a central theme in the work of the philosopher Martin Heidegger . It is dealt with extensively, especially in his main work, Being and Time . For him, care determines the existence of a person - it makes him aware of his existence. He determines concern - with regard to the three dimensions of time as "being ahead of oneself - in being-already-in-the-world - as being with beings encountered within the world." In relation to his lifeworld, it shows itself as "worrying" (ie perceiving the factual use of things), in relation to one's fellow human beings as ( “jumping in” or “projecting” ) care .

Albert Camus sees the existence of humans as a general absurdity, yet this does not lead to an obvious nihilism , but, according to Camus, to concern for the happiness of one's neighbor and to sacrifice for others, synonymous with human solidarity . "The simple 'worry' is the beginning of all things."

The worries of the Germans (an empirical example) 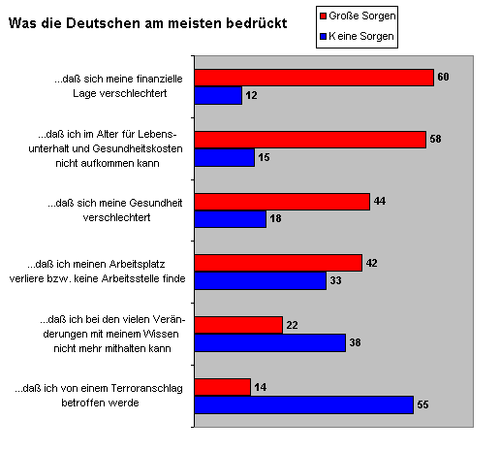 What depressed the citizens of Germany in 2005

According to a study published by McKinsey in 2005, the citizens of Germany were increasingly concerned and depressed. Concern about the job was the main cause of anxiety about the future for 42%. Only 28% of those questioned stated that they expected to be able to live well in Germany five to ten years later.

While in 2003, according to surveys, 65% of citizens were satisfied, in 2005 it was only 60%. Around 60% of those surveyed in 2005 believe that the financial situation of citizens in Germany is deteriorating.

The subject of worry is dealt with many times in poetry. The fatal outcome of the most serious worries is z. B. in Gottfried August Bürger's ballad Lenore from 1774 ("Lenore drove in the dawn / up out of heavy dreams."). In Johann Wolfgang von Goethe's Faust , “worry” overtakes the protagonist at the end .