The Nissan Micra , originally Datsun Micra , also available as Nissan March on other markets , is a small car from the Japanese manufacturer Nissan that has been built in several generations since the end of 1982 .

The Datsun Micra was presented as a three-door model in December 1982 and sold in Germany . After Nissan decided to discontinue the Datsun brand , it became the Nissan Micra . Production for the European market took place in the factory of the Spanish company Nissan Motor Ibérica SA.

In Japan and some other countries, the Micra is known as the Nissan March . A five-door variant was added in the summer of 1985 .

In July 1986, the first facelift was carried out, including significantly larger bumpers. In addition to the standard 5-speed manual transmission, the first Micra generation was also available with a 3-speed automatic transmission with a torque converter lock-up clutch, which was unusual for small cars at the time.

The Pao , S-Cargo and Figaro were developed on this platform in 1989 .

The second and last facelift of the Micra K10 was given in September 1989. This was recognizable by the slightly more rounded front of the vehicle, that is, the transition from the headlights and the slightly reduced bumpers to the fenders was flowing. In addition, the Nissan got a radiator grille with two adjacent air openings.

The Nissan Micra was offered in the L, LX and Super S equipment lines from autumn 1989 . L referred to the basic model that was offered in Germany with the nickname Hit . This was externally recognizable by the missing side protection strips and unpainted bumpers. The LX variant was well equipped for the conditions at the time with tinted windows, remote tailgate unlocking, center console and split folding rear seat. The Micra Super S also offered sports seats, standard wide tires and a tachometer (instead of the quartz clock on the L and LX ). A large electric folding roof was optionally available for the LX and Super S. The little Nissan was then nicknamed Topic. In addition, numerous special models have been offered in the last few years, for example the Micra Peppermint with a mint green metallic finish. All equipment lines only had a 1.2-liter gasoline engine with 40 kW (54 hp) and a regulated catalytic converter .

This article or section needs to be revised. Further details should be given on the discussion page under " K10 motors ". Please help to improve it , and then remove this flag.
Technical data Nissan Micra / March (1982–1992)

In August 1992 the second generation of the Nissan Micra was presented. It received the 1993 Car of the Year award and was the first Japanese vehicle to receive the award . In addition to the standard 5-speed manual transmission, this Micra generation was also available with a continuously variable automatic transmission ( CVT ). Production for the European market now took place in the English plant of Nissan Motor Manufacturing (UK) Ltd. held at Washington . In some Asian countries there is also an offshoot that is marketed as Nissan Verita and Maruti Zen Classic .

From 1997 a convertible version of the Micra or March was also available on the Japanese market . This series was and is also used in rally sport, also in rallycross.

The March Box combination version was also reserved for the Japanese market.

The Micra underwent two revisions during its ten-year construction period:

The first revision took place in February 1998. The models could be recognized by the larger headlights and changed air inlets on the radiator grille. Another facelift was carried out in September 2000, which was mainly made visible by the chrome trim around the radiator grille and the darkened rear lights.

After two extensive revisions to the predecessor, the third generation of the Micra came onto the market in February 2003. This generation also came from English production for Europe. The characteristic feature of this small car is above all the rounded design, which is intended to appeal to female customers in particular.

In June 2005 the Micra received a facelift, externally recognizable by the modified front section with bumper strip, enlarged air inlet below the license plate, preparations for fog lights and the now white front indicators.

The K12 series is not as popular as its predecessor (K11), partly because of the technical design. There are also initial problems with the timing chain . The manufacturer used a short-lived timing chain, especially for the 65-hp and 80-hp 1.2-liter gasoline engines built in 2003 and 2004. A change is necessary for less than 80,000 km. In later years of construction the problems with the timing chain subsided, and the ADAC voted the Micra the car with the fewest failures in 2007.

Production was stopped in June 2010. The successor came on the market at the end of the year.

A C + C ( Cabriolet / Coupé ) of this generation was also available from June 2005 . The roof system was manufactured by Karmann at the Nissan plant in Washington.

Production ended in March 2009 due to a lack of demand.

For the 25th birthday of the Micra, Nissan brought out a special model "25th Edition". This has silver-gray exterior mirrors and hubcaps and silver-framed floor mats in the interior. On the stern at the bottom right there is a circular logo with the inscription 25th .

From November 2005 there was also a sports version of the Micra K12. This version has a 1.6 liter engine with 81 kW (110 hp) and is called the 160SR . In addition, it also has sports spoilers , aluminum wheels and, in the 160SR pack version, almost full equipment.

The fourth generation of the Nissan Micra was presented in March 2010 at the Geneva Motor Show in Switzerland. The new Micra is offered in 160 different markets, which are supplied from the production facilities in Thailand, India, Mexico and China. For the Indian market there has also been a sister model called Renault Pulse since 2012 .

Sales of the K13 started in March in Thailand and in late 2010 in Switzerland and Austria. The market launch in Germany should follow on November 20, 2010, but was postponed to March 19, 2011 due to delivery problems. 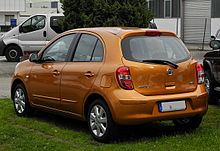 In June 2013 the Micra received a mainly optical facelift. The modernized version reached the dealer in September 2013.

At the front is a modified radiator grille with a V-shaped chrome strip that emphasizes family affiliation. In addition, the bonnet, fenders, headlights and bumpers have been revised. At the rear there are new bumpers and taillights with light emitting diodes.

The vehicle is based on the newly developed V platform . The interior offers more space than the previous model due to the modified body dimensions and the enlarged wheelbase. In contrast to its predecessor, the redesigned Micra is only available with five doors. The distinctive arched line above the side windows from the previous generation was incorporated into the design, as this should be retained as a distinguishing feature of the series.

In Europe, the Micra is equipped with two three-cylinder - petrol engines available as either naturally aspirated or compressor are offered and have 1.2 liter displacement. The newly developed engines with vibration-damping counterweights on the crankshaft and variable valve control come from the HR engine series, which are also installed as four-cylinder in the Tiida or Qashqai . The compressor version is less CO 2 emit and consume fuel, but here by the charging achieve the performance of a normally aspirated engine with 1.5 liter displacement. Through the direct fuel injection , the application of the Miller-cycle process and the start-stop system that was efficiency further improved. At the start of sales, only the naturally aspirated engine is available, which was supplemented by the compressor engine in 2011. Both drive variants can be combined with a five-speed manual gearbox or a continuously variable CVT automatic shift .

When Euro NCAP - Crash Test in November 2010, the Micra got 30 points in occupant protection, 39 points in child protection and 21 points for pedestrian protection.

The luggage compartment of the Micra K13 is 265–1132 liters, the tank capacity is 41 liters (applies to all versions).

Since the Nissan Micra K13 has no support or trailer load, it is the first Micra for which there is no trailer coupling (not even in the accessory trade).

The basic Visia First model has electric power steering with a height-adjustable steering column, manually adjustable exterior mirrors, electric front windows, central locking with radio remote control, a fully folding rear seat backrest and Isofix child seat brackets on the rear seats. The car is equipped with 14 "steel wheels (tire size 165/70 R 14) and is only available in black or white at no extra charge. The only optional extra for the basic model, apart from the metallic paint, is the Comfort Package , which consists of a manually controlled There is air conditioning with pollen filter in connection with the CD radio with four loudspeakers.

The Micra Acenta is equipped with manually controlled air conditioning (after the facelift also with automatic air conditioning), an on-board computer, electrically adjustable and foldable exterior mirrors, a leather-covered steering wheel, cruise control system with limiter , CD radio with four speakers, fog lights, additional shelves, reading lamp and one 60:40 split rear seat backrest, which can also be completely folded up. The Acenta has 15 "alloy wheels (tire size 175/60 ​​R 15) and is the only model also available with the automatic CVT .

In addition to exterior mirrors, which can also be electrically folded and heated, the Tekna model has an automatic air conditioning with pollen filter, a glass roof, rain sensor, 15 "alloy wheels, a parking guide (determines whether the parking space is sufficient for parking) with rear parking sensors, the Intelligent Key with start / stop button and fog lights. The Nissan Connect navigation system with 5 "color display, which is also available for the Acenta at an additional cost , is standard.

Unlike the previous model, the fifth generation is no longer built in Thailand. It is now being built together with the fourth generation of the Renault Clio and its electrically powered offshoot Renault ZOE at the French Renault plant in Flins-sur-Seine .

At the start of sales, the new Micra was offered with two 66 kW (90 hp) engines from Renault: a 0.9-liter three-cylinder gasoline engine , which is also installed in the Smart , and a 1.5-liter four-cylinder diesel engine , both with turbocharger . A 54 kW (73 hp) 1.0 liter gasoline engine with manifold injection followed shortly thereafter . Nissan announced a 1.2 liter 88 kW engine with a 6-speed manual transmission for 2018; this works without a balancer shaft . The well-known X-Tronic automatic transmission will also find its way into the Micra, presumably in combination with the 54 kW petrol engine.

All Micra have rack and pinion steering with electrical assistance. The front wheels are suspended from MacPherson struts and wishbones, and a torsion beam axle is installed at the rear . The braking system has disc brakes at the front and drum brakes at the rear.

The Micra is available in the following versions:

There is also the around-view monitor known from the other Nissan models, which shows the vehicle from a bird's eye view on the screen of the infotainment system when parking.

Standard equipment for the Visia variant

In addition to the two uni paint finishes, there are various metallic finishes and two pearl effect finishes.