Olsztynek [ ɔlˈʃtɨnɛk ] ( German Hohenstein ) is a town in the Olsztyński powiat of the Warmian-Masurian Voivodeship in Poland . It is the seat of the town-and-country municipality of the same name with 13,784 inhabitants (as of June 30, 2019).

The city is located in the historical region of East Prussia , about 25 kilometers southwest of Olsztyn (Allenstein) .

The western part of the Masurian Lake District and the southern elevations of the Prussian Oberland , which rise up to 200 meters, shape the landscape. Immediately in front of the city gates is the small Mispelsee, while about ten kilometers east of the Plautziger See (Jez. Pluszne) is one of the largest lakes in the lake district. With the Ameling a tributary of the Passarge crosses the place. Numerous smaller forest areas stretch around it. The traffic situation is favorable, there is a connection to a railway line to Olsztyn (Allenstein) and in the other direction via Działdowo (Soldau) towards Warsaw, in addition the two highways 7 (Elbląg - Warsaw) and 51 (Olsztynek - Kaliningrad) cross in the city. . 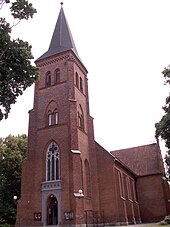 Arcade house in the open-air museum

In order to promote the settlement of the Sassenland, which is located in the southwest of what will later become East Prussia, the Teutonic Order built several castles there, including one in 1350 by the Osteroder Komtur Günter von Hohenstein north of the Medlar lake. A settlement named after the builder of the castle was established near Hohenstein Castle. Already in 1359 the Grand Master of the Order Winrich von Kniprode granted her town charter and left her 30 duty-free hooves . The residents received the fishing rights on the Mispelsee. At that time there was already a church which, according to unconfirmed sources, had been built in 1348. The Osterode commandery set up a chamber office in the city to administer the region.

In the battle of Tannenberg near nearby Tannenberg , the Teutonic Order suffered its historic defeat against Poland in 1410. Further battles against Poland in 1414 led to the Hohenstein Order itself burning down in order not to let the city fall into Polish hands. However, with the support of Commander Wolf von Sansheim, reconstruction could begin soon afterwards. When the order began to pass its war debts on to the cities, Hohenstein joined the Prussian Federation in 1440, which wanted to defend itself against the reprisals. One year after the Thirteen Years' War between the Federation and the Order, which broke out in 1454 , the city canceled its membership and submitted to the Order again. During the last military conflict between the Order and Poland, the Cavalry War from 1519 to 1526, Hohenstein was occupied by Polish troops for a long time.

After the monastic state was converted into the secular Duchy of Prussia in 1525 , the city was assigned to the newly created Oberland District and received the seat of a main office. The first governor was Friedrich von der Oelsnitz, to whom the office was pledged. The Reformation was carried out in Hohenstein after 1525 by the archpriest Matthias Bienwald. He later became one of the most important theologians in Prussia. In 1610 the main office was dissolved and the main office in Osterode was added. A chamber office remained in Hohenstein, to which the still existing pledge was transferred. From 1643 to 1682 , Johann von Hoverbeck , the envoy of the Prussian Elector Friedrich Wilhelm I in Warsaw, was pledge holder. With the dissolution of the Chamber Office in 1704, the pledge ended. The plague that broke out in the country in 1709 killed numerous residents in Hohenstein. According to a form of administration, the city belonged to the Mohrungen district from 1752. Several large city fires repeatedly caused great damage. After 1651 and 1685 the town hall was destroyed in the last big fire in 1804. The Napoleonic occupation in 1806 and 1807 affected the city so much that the debts arising from the burdens were not paid off until 1832.

With the Prussian administrative reform of 1815 there was another change of district membership, the city now belonged to the Osterode district . In the middle of the 19th century, the two later Reichsstrasse 130 (Danzig - Hohenstein - Allenstein) and 389 (Hohenstein - Neidenburg) were built, followed by the construction of the Allenstein – Soldau railway line in 1887/1888 , which also ran via Hohenstein. In 1894 the line from Hohenstein was added. However, the new traffic routes did not bring any notable industrial boom. Only a wool weaving mill was on site.

In 1845 a Progymnasium was established in the old Ordensburg . In 1857 the educational establishment was expanded into a complete grammar school , which for a long time was the only one within a hundred kilometers. The first high school graduation exam took place in 1858. The best- known student was the bacteriologist and serologist Emil von Behring . From 1903 to 1933 the Hohenstein Lung Sanatorium was located in the city forest approx. 4 km north of the city center .

During the First World War , German and Russian soldiers fought in the city during the second Tannenberg Battle from August 27 to 29, 1914, in the course of which the town hall and 189 other buildings were destroyed. With the help of the sponsored city of Leipzig , the reconstruction began during the war using the knowledge of modern urban planning, which was completed in 1923 with the inauguration of the new town hall. Due to the provisions of the Versailles Treaty , the population in the Allenstein voting area , to which Hohenstein belonged, voted on July 11, 1920 on whether it would continue to belong to East Prussia (and thus to Germany) or join Poland. In Hohenstein, 1,780 residents voted to remain with East Prussia, Poland had 20 votes. On September 18, 1927, Field Marshal Hindenburg inaugurated the Tannenberg memorial near the city in front of 70,000 participants . After his death, Hindenburg was buried on August 7, 1934 in a crypt built into the memorial.

During the Second World War, the largest prisoner-of-war camp on East Prussian soil was set up near the Tannenberg Memorial . An average of 20,000 Polish, French and Soviet soldiers were housed in barracks and burrows. A total of 55,000 prisoners of war died here and were buried in the Schwenteinen cemetery. With effect from April 1, 1941, parts of the city that had come to the eastern bank of the Passarge due to a river regulation were reclassified to the Allenstein district .

Towards the end of the Second World War , Hohenstein, which had 4,236 inhabitants at the beginning of the war, was captured and occupied by the Red Army in January 1945. After the end of the war, the city and the southern half of East Prussia were placed under Polish administration . The immigration of Poles and Ukrainians from the areas east of the Curzon Line that fell to the Soviet Union began . Unless the German population had already fled Hohenstein, they were expelled by 1947 . The partially destroyed city was given the Polish name Olsztynek . 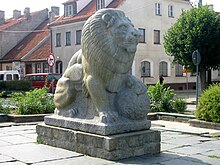 Lion of the Destroyed Fallen Monument, today on the market square

The town itself and 33 villages with 32 school boards belong to the town-and-country community (gmina miejsko-wiejska) Olsztynek.

Sorted by year of birth