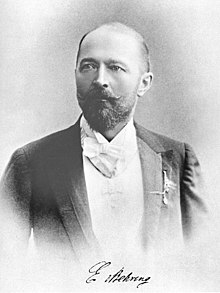 Emil Adolf Behring , from 1901 von Behring (born March 15, 1854 in Hansdorf , Rosenberg district in the province of West Prussia , † March 31, 1917 in Marburg ) was a German physician , immunologist and serologist . He was the founder of the passive antitoxic vaccination ("blood serum therapy") and in 1901 received the first Nobel Prize for Physiology or Medicine .

Particularly due to his success in the development of drugs against diphtheria and tetanus obtained from blood serum , he was in the press as the “savior of children” and - since the tetanus healing serum was particularly beneficial for the wounded of the First World War - as the “savior of soldiers “Boasted. In 1915, Behring was awarded the Iron Cross on a white ribbon by Kaiser Wilhelm II .

Emil Adolf Behring (from 1901 Emil von Behring) was born as the son of the teacher Georg August Behring (1819–1886) and his second wife Augustine Zech (1828–1892). His father already had four children from his first marriage, and Emil was the first of another nine. A grant from the Prussian state enabled him to graduate from high school. On October 2, 1874, he entered the Kaiser-Wilhelms-Akademie for military medical education in Berlin, where he completed his medical studies at state expense in return for an eight-year military medical service after graduation. In 1878 he was at the Berlin Friedrich-Wilhelms University with a thesis on recent observations about the neurotomy opticociliaris Dr. med. PhD ; He received his license to practice medicine in 1880. He then worked as a military doctor in the province of Posen , the stations were Wohlau (1878–1880), Posen (1880–1883), Winzig (1883–1887) and Bojanowo (1887).

The military on hygiene, care of wounds and prevention of disease -oriented training of military doctors sensitized Behring for Disease Prevention and hygiene. Behring received further important impressions from the pharmacologist Carl Binz in Bonn and during his time as assistant to Robert Koch and later as senior physician at the medical clinic with a focus on infectiology and pulmonology at the Charité von Koch's Prussian Institute for Infectious Diseases in Berlin. Behring began his work on serum therapy in 1890 with the Japanese Kitasato Shibasaburō , with whom he published the essay "On the emergence of diphtheria immunity and tetanus immunity in animals" . The essay is the basis of serum therapy. At the end of 1891, the diphtheria healing serum ( diphtheria antitoxin ) obtained from the serum of sheep was used for the first time on two children suffering from diphtheria at Ernst von Bergmann's Surgical University Clinic - but unsuccessfully because the dosage of the antitoxin used was too low. The collaboration of his colleagues Paul Ehrlich and Erich Wernicke made a significant contribution to the development of an effective healing serum . The basic idea of ​​the blood serum therapy implemented by Behring and his Berlin colleagues is based on the assumption that it is possible to fight the pathogens of infectious diseases not with disinfecting chemicals, but with antitoxins - i.e. with antidotes that the body itself produces as part of the defense reaction become.

From a scientific point of view, the breakthrough came at the beginning of 1894, when the diphtheria healing serum was used successfully not only in the Berlin clinics, but also in Leipzig and other cities. The remedy also replaced the trachea incision that had been made during the treatment and was described by Otto Heubner as "Behring's Gold" during the International Hygiene Congress in Budapest. However, Behring lacked financially strong non-governmental partners in order to realize his groundbreaking idea of ​​an antitoxin treatment on a large scale. As early as autumn 1892, the board member of Farbwerke Hoechst , the chemist August Laubenheimer , recognized the scope of Behring's ideas and won him over to work with the company. Production began in Frankfurt-Höchst in August 1894 ; In November of the same year a serum production facility with initially 57 horses was inaugurated in Höchst with Behring and Robert Koch in attendance. By the end of the year, over 75,000 serum bottles had already been dispatched, and in the year of operation in 1895 the net profit was 706,770 marks. The Farbwerke offered a diphtheria healing serum according to Behring and Ehrlich , which achieved a cure rate of 75 percent in this previously fatal childhood disease. In October 1894, thanks to the mediation of the ministerial official Friedrich Althoff , Behring was appointed Hygiene Professor at the University of Halle .

In 1895 the Prussian state appointed Behring, who could not record any teaching success in Halle, to the University of Marburg as full professor of hygiene and director of the Institute of Hygiene. In the same year, a private laboratory, which was very well equipped for the time, was set up on the Schlossberg with funds from the dye works and 25,000 gold francs from the “Prix Alberto Levi” awarded to him in France, which also included a small stable for the experimental animals. In 1901 Behring was awarded the first Nobel Prize in Physiology or Medicine awarded, having already on 18 January 1901 ennobled was (from then Emil Adolf of Behring). In 1903, Kaiser Wilhelm II awarded him the title of "Excellency" as a Real Privy Councilor .

In the course of 1903, Behring pondered the idea of ​​starting his own company, whereupon further lands and an estate at the castle park were added to the laboratory in 1904, which formed the basis for the Behring factory. One reason for striving for independence in one's own company was the change in the previous contractual relationships with the Farbwerke in Höchst, in which August Laubenheimer, who had previously acted as mediator, left the board in 1903.

Laboratory from 1913 in Wannkopfstrasse in Marburg

Behring traded at its business start-up the following words: "The extensive and very expensive buildings, land, livestock, laboratory facilities, which still directed at specific targets departments come up with numerous servants staff are united to form a combined company, which has received Behring plant the name." But despite Behring needed a business partner for the independence he had now gained, as he did not understand much about the commercial management of a company and the sale of his products. On November 7, 1904, he was assisted by the Marburg pharmacist Carl Siebert as a partner and partner when the new company was entered as “Behringwerke oHG” in the commercial register. The company started with ten employees. Rapid growth in the company resulted in the conversion of the Behringwerk into the Behringwerke Gesellschaft mbH in 1914 .

With the beginning of the First World War, production was expanded enormously, as Behring's tetanus healing serum was now the savior of the deadly tetanus for the soldiers lying in the filthy trenches. In addition to the tetanus healing serum, dysentery and gas burn serum as well as cholera vaccine were produced for the army.

Emil von Behring died before the end of the First World War, on March 31, 1917, at the age of 63 in Marburg, sick since the summer of 1916 and withdrawn from all scientific and entrepreneurial business. The resting place is in the Behring mausoleum on the Elsenhöhe , named after the wife Else von Behring, who offers a view of Behring's former lands and Marburg Castle .

Since 1874 he was a member, later an honorary member, of the Pépinière-Corps Suevo-Borussia, which continues to this day in the Corps Guestphalia et Suevoborussia Marburg .

From November 1907 to the summer of 1910, Behring received medical treatment from the internist Rudolf von Hößlin (1858–1938) in his Neuwittelsbach sanatorium in the Munich district of Nymphenburg, where he "hoped to find relaxation from the stressful work" (according to Zeiss and Bieling 1940/41, p. 497). At least during this time he suffered from severe depression. This is also reported by one of Sigmund Freud's most famous patients , the “Wolf Man”, in his memoir. He had seen Behring during a stay in a sanatorium in 1908 near Nymphenburg Palace in Munich (Behring “suffered from a severe depression that you could read directly from his face”); the clinic was also looked after by the well-known psychiatrist Emil Kraepelin . 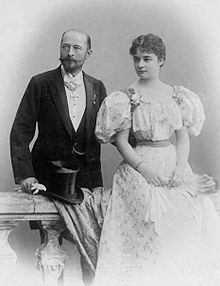 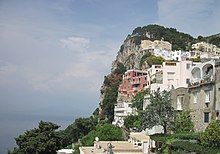 Villa Behring on the Italian island of Capri (red building)

His nephew Walter Bieber (1890–1972) also studied medicine and worked from 1919 to 1923 as a senior physician at the Emil von Behring Institute in Marburg. Later he was head of the epidemic department in the Reich Ministry of the Interior in Berlin.

Hitler declared Else Spinola a Edelarian in 1934, after von Behring had slandered her for contaminating Germanic blood with the animal blood serum. The " striker " had claimed that Behring had "messed up his own blood." On the fiftieth anniversary of the discovery of serum therapy in 1940, the National Socialist State also held a large memorial service with scholars from 23 nations. 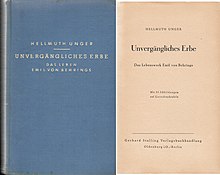