This article explains the condition. For the form of contraction of the skeletal muscles, see tetanus (physiology) .

The tetanus (from ancient Greek τέτανος tetanos , German , voltage, spasm ' ), and tetanus (and tetanus ), is an often fatal acute infectious disease which affects the muscle-controlling nerve cells of the central nervous system is characterized by a spasmodic muscle rigidity and by the bacterium Clostridium tetani is raised. The resistant spores of the bacterium can be found almost everywhere, also in road dust or in the garden soil. Infection occurs when the spores enter wounds . Only under anaerobic conditions, ie under oxygen absence, the spores germinate, the bacterium multiplies and secretes toxins ( toxins ) from. The proteolytic toxin tetanospasmin damages the muscle-controlling nerve cells and thereby causes the typical muscle cramps . The toxin tetanolysin is heart-damaging.

Even in ancient times, the doctor Hippocrates of Kos described the so-called tetanus triad: wound, jaw cramp and death. The Italian researchers Antonio Carle (born May 3, 1854 in Chiusa di Pesio ; † February 23, 1927 in Turin ) and Giorgio Luigi Rattone (born April 25, 1857 in Moncalieri ; † December 20, 1929 in Parma ) were able to detect tetanus in animals in 1884 by inoculating pus from a human tetanus wound on the sciatic nerve of rabbits. This made an infectious disease likely.

Arthur Nicolaier detected the causative agent of tetanus in the soil by inoculating garden soil on test animals. He published this discovery in 1884. Although he was able to breed the pathogens on an artificial culture medium, he did not succeed in isolating the tetanus bacillus in pure culture. However, he observed bacilli that had a head and thus had the typical shape of the Bacillus Clostridium tetani . His colleague Friedrich Julius Rosenbach succeeded in transmitting tetanus from humans to animals. Rosenbach described the shape of the bacillus as a pin or baton in 1885 . The Dane Knud Helge Faber (born August 29, 1862 in Odense , † May 3, 1956 in Copenhagen ) finally succeeded in producing a germ-free tetanus toxin from filtrate in 1889. In the same year, the Japanese microbiologist Kitasato Shibasaburō, researching Robert Koch's Berlin institute, was able to isolate the anaerobically grown tetanus bacillus. Kitasato and Emil von Behring finally succeeded in obtaining an antitoxin in 1890. With this antitoxin production, Behring laid the foundation for "serum therapy" . In 1946, Louis Pillemer (* 1908 in Johannesburg ; † August 31, 1957 in Cleveland Heights ) finally succeeded in obtaining the tetanus toxin in pure form by means of crystalline representation, making a significant contribution to the elucidation of the chemical structure of the poison.

Effect of the toxins

A group of Clostridium tetani

Tetanolysin is hemolytic and cardiotoxic, but insignificant for the typical symptoms of the disease. More important is tetanospasmin , which reaches the central nervous system via peripheral nerve pathways . There it attacks proteins ( SNARE ) that are necessary to release the neurotransmitters ( glycine and GABA ) of the Renshaw cells in the anterior horn of the spinal cord . Tetanospasmin is an endopeptidase . The blockade takes place via an enzymatic inactivation of the Synaptobrevin / Vesicular Associated Membrane Complex, whereby the release of the neurotransmitters is disturbed by exocytosis . This leads to uncontrolled activation of the alpha motor neurons and tonic (persistent) and clonic (twitching) cramps of the striated (voluntary) muscles . 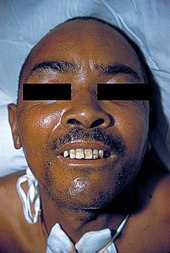 Spasms of the back muscles ( opisthotonus )

First you experience flu-like symptoms such as headache , dizziness , restlessness, trembling limbs, fatigue, signs of fatigue, muscle aches and sweats . Then the mouth can no longer be opened by a jaw clamp (trismus) , and a facial expression that grins due to cramping of the mimic muscles, the so-called devil's grin (Latin risus sardonicus ) is created. In the further course of the process, the long back muscles become tonic , which often descends from the neck and can lead to painful hyperextension and, if left untreated, even to vertebral fractures. This is followed by tonic and twitching (clonic) muscle spasms in the arms, legs, larynx and diaphragm. The cramps last one to two minutes and are triggered by the smallest external stimuli ( acoustic , optical , mechanical ). If left untreated, death follows by suffocation .

Feeling and consciousness (sensorium) are not impaired, which is why this disease is excruciating if left untreated. A direct infection from person to person is not possible.

Depending on its occurrence, tetanus is distinguished as follows:

The diagnosis of tetanus is made based on typical clinical findings. Illness is unlikely if the patient has been given a complete primary series and timely booster vaccinations have been given. To confirm the diagnosis, toxin detection can be carried out by means of a neutralization test in animal experiments (mouse) using wound material from the patient. The cultural pathogen detection is usually not successful. In the animal experiment with mice, different amounts of patient serum are inoculated. The proof is positive if the mice die in a so-called "seal position" (rigid convulsions of the hind legs) compared to a control group (patient serum with antitoxin).

In Germany there is currently a lack of meaningful data on the current frequency of tetanus due to the obligation to report under the Infection Protection Act, which was lifted in 2001 . The overall incidence has fallen sharply in the past few decades, so that fewer than 15 diseases per year have been recorded for a long time. In 1999 and 2000, 8 diseases were reported in accordance with the Federal Disease Act. The mortality rate in Germany is 25%.

In countries with a warm, humid climate and a lower vaccination rate, however, tetanus occurs much more frequently. According to WHO statistics , there were 9,836 incidences worldwide in 2009 .

A particular risk factor is umbilical infection, which occurs when children are born under inadequate hygienic conditions or, as is traditional in some peoples, when earth pastes are applied to the umbilicus for wound care. According to WHO estimates, 180,000 babies worldwide died of newborn tetanus in 2002; in 2002, 11,624 cases were recorded statistically. The numbers are declining worldwide, in 2009 only 4,713 cases were recorded.

There is no real causal treatment for the disease that has broken out . Because the tetanus toxins spread via the nerve sheaths, high doses of serum (foreign antibodies, passive immunization) via the bloodstream are controversial. A thorough cutting out of the wound, possibly an amputation (focal clean-up), ensures that the tetanus pathogen does not multiply, as further toxin production in the wound must be prevented.

As antibiotic can metronidazole are used. In mild cases, symptomatic treatment based on the symptoms of the disease can avoid the cramps triggered by acoustic and optical stimuli by placing the patient in a darkened and soundproofed room and using strong sedatives. In all severe cases, however, muscular relaxation with medication is required along with mechanical ventilation .

After a sufficient antibody level has been reached, the symptoms subside and mechanical ventilation can be stopped after four to eight weeks. Despite modern intensive care medicine, consequential damage occasionally remains, which requires further treatment. The survived illness does not leave a sufficient antibody titer without additional active vaccination , so that a new illness is possible. This makes preventive vaccination all the more important.

Basic immunization is carried out in infancy, followed by a booster in the fifth and sixth year of life. The complete vaccination protection is effective for at least ten years, after which an active booster vaccination is recommended.

The titer of the protective antibodies produced by vaccination can be measured in the laboratory or with a rapid immunochromatographic test. However, this is not done regularly.

After an injury, if there is no or only insufficient vaccination protection, both active and passive , i.e. simultaneous , immunization is necessary. This consists of an injection of a toxin weakened by formol , but immunogenic (toxoid, e.g. tetanol ; there is also a combined tetanus-diphtheria vaccine) and an injection of serum enriched with human antibodies against the tetanus pathogen (tetagam, tetanobulin) . The passively acting serum administration is intended to bridge the time interval until the onset of antibody formation that was stimulated by the active toxoid administration. For the exact indication regarding simultaneous vaccination, see recommendations of the Standing Vaccination Commission.

This is followed by further active repeat vaccinations according to a scheme recognized by the STIKO of the German Medical Association in order to achieve long-term effective protection against tetanus.

Before the development of human antisera, the sequence horse , cattle , mutton applied to the exclusively available animal sera . In this way, a sensitization through foreign protein should be avoided. This recommendation was valid until the last third of the 20th century.

Since the pathogens are obligate anaerobes, i.e. they only grow when there is a lack of oxygen, a wound needs to be cleaned even with abrasions . Dead tissue in which the oxygen has been used up should possibly also be surgically removed (see wound treatment ). However, the spores of the bacteria are extremely resistant and can usually not be killed even with medical disinfectants.

In Switzerland, tetanus for doctors, hospitals, etc. a notifiable disease and that after the Epidemics Act (EpG) in connection with the epidemic Regulation and Annex 1 of the Regulation of EDI on the reporting of observations of communicable diseases of man . The clinical diagnosis must be reported. 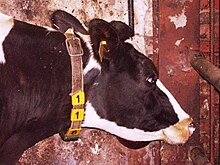 The susceptibility to tetanus infection is particularly high in horses and other solipeds. Horses therefore receive an additional immunization ( booster dose ) after the first vaccination after six to twelve weeks and after twelve months . A refreshment should be done every two years. A typical symptom, in addition to the blocked jaw, is the sawhorse position of sick animals.

Ruminants and pigs are also highly receptive. Dogs and cats are only slightly susceptible. Birds are almost completely resistant.