The title of this article is ambiguous. Further meanings are listed under wound (disambiguation) .

Sewing up a wound on the hand

A wound (from Old High German wunte 'wound', 'blow', 'injury', like Latin vulnus from Indo-European wen , 'suffer'; Greek trauma ) is a defect in the protective covering tissue (separation of the tissue connection ) on the outside (skin) or inside (Mucous membrane) Body surfaces with or without tissue loss. In most cases it is due to external force caused, but also the sole result of a can disease be like as an ulcer ( ulcer ). 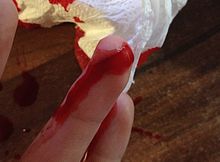 Fresh bleeding wound on the fingertip of the left ring finger

Because of illness . The causes are:

A distinction is made between the following types of wounds:

A distinction is made topographically (in terms of location), external and internal wounds: The latter can be observed in gunshot or deep stab wounds from weapons, but also in speared bone fractures and in rapid injuries (motor vehicle accidents ). What is feared here is, on the one hand, pronounced bleeding from vascular or heart damage or from tears in the spleen or liver . On the other hand, there is a risk of infection through the opening of germ-colonized hollow organs such as the intestine or urinary bladder . Thirdly, life-threatening dysfunctions in injuries to the brain , heart or lungs are encountered in such wounds.

On the other hand, what is probably the most common internal injury, bleeding into loose soft tissue in the event of a bruise , does not count as a wound by definition if it is found without cutting the body surface at the same time.

A simple wound is distinguished from the complicated wound .

A simple wound is an injury to the skin, subcutaneous tissue (fat layer), possibly fascia (connective tissue body shell) and, in the case of a compound wound, also muscle . A lesion of the mucous membrane without perforation is also assigned to this group. Here healing is often easy and safe to achieve. The simple wound caused by external violence, which affects the muscle tissue but is not organs and not life-threatening, is also called a flesh wound .

A complicated wound includes an injury to the tendon sheaths , tendons, joints , vessels, or nerves. Wounds with organ damage and opening of cavities (body cavity, chest , skull) also belong to this group. The treatment requires great medical knowledge and should not be attempted by any layperson.

The greatest risk is caused by injuries from contaminated instruments at the pathologist, skinner, butcher, fisherman or injuries to contaminated laboratory glass fragments (microbiologist). One rightly fears contamination with germs that have already passed through humans or animals and have become more virulent. This risk group also includes needle stick injuries to medical staff and addicts (from used cannulas ). Transmission of HIV and hepatitis is possible with both.

Wounds soiled with garden soil or street dust or even wounds acquired in the trenches are classified in a completely different group . There is a threat of infection with dormant spores ( tetanus or gas fire ).

The lowest risk of infection in the group of occasional wounds is a cut from an unused, clean kitchen knife.

The wound healing is a natural biological process and already begins minutes after wounding. The goal of healing measures is a complete, functional and cosmetic restoration ( restitutio ad integrum ), which can only rarely be achieved in full. A visible scar often remains ( defect healing ).

It is only up to the doctor to optimize the conditions to alleviate symptoms ( wound pain ), to prevent complications or infections , to prevent delays and to make the cosmetic result as optimal as possible. There is still no real acceleration of wound healing. When changing dressings , doctors or nurses observe the healing progress, clean the wound area and, if necessary, the wound area and protect the wound with an artificial cover.

A distinction is made - not uniformly and without contradiction - between three to five phases of wound healing that overlap in time, are based on classic light microscopic examinations and are only visible to the naked eye in secondary healing wounds. The starting point of every wound healing is a disturbance of the blood flow through capillary injuries . The initial bleeding initiates blood clotting , the destroyed blood vessel is closed by a clot (blood clot) .

A distinction is made between two treatment phases only for occasional wounds:

It is a first aid item and does not apply to surgical wounds. The wound of opportunity requires one:

The wound is covered with a wound pad, for example made of gauze or with newer dressing materials, and is fixed with elastic bandages. Cyanoacrylate adhesive can be used to cover wounds for simple grazes or cuts . Foreign bodies that have penetrated deeply must not be removed before the patient is transported because, on the one hand, they may have perforated vessels or hollow organs which cannot be supplied on site and, on the other hand, it is difficult to precisely determine the extent of the injury in the operating room due to premature removal. They remain fixed, protected from movement during transport and further intrusion. On large burns or scalds not want ointments are applied. The clothing should be extinguished, but left unchanged on the victim's body, provided it or its combustion products are not toxic. However, in the case of acid or alkali burns, the soaked clothing must also be removed in order to avoid further damage.

The immobilization as part of the first aid is usually done with vacuum or other positioning rails. 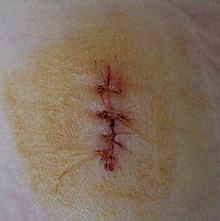 This section applies to all types of wounds. Here, too, the fight against pain and hemostasis for shock prophylaxis are imperative and important.

The fight against pain 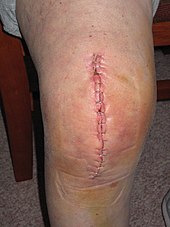 A stapled wound on the knee

In the case of extensive injuries, systemic analgesia affecting the entire body can be carried out and is supplemented by local anesthesia as part of surgical wound care, or the entire care is performed under anesthesia .

includes the removal of foreign bodies and definitive hemostasis by means of vascular sutures or ligation of vascular stumps.

The following two alternative treatments are not used on aseptic surgical wounds.
A distinction is made in terms of effort, healing success and practicality:

It is based on Friedrich's attempts at wound healing, who examined the temporal spread of germs in contaminated wounds and postulated an excision within six hours to avoid an effective infection. But it is often not practical for casual wounds. In this way, nobody will cut out a nerve or important vessel at the wound base.

The methods of closure are more diverse today than they were a century ago. The edges of the wound can be:

These procedures can occur in combination.

Open wound treatment in the narrower sense is only permitted in rare cases. A closed, i.e. primary healing wound can be adequately protected from renewed contamination with a spray bandage . However, sterile gauze plasters are still common. In the case of damaged wounds and especially secondary healing , newer wound dressings such as hydrocolloid -containing moist dressings , which promote undisturbed biological wound healing , products made from seaweed or silver-containing dressings because of their oligodynamic effect , which are intended to promote infection control, are used despite higher costs .

Immobilization is a double-edged matter. The biological healing takes place in the early phase under complete rest undisturbed. Infections from unavoidable contamination seem to be less common. Therefore, splints or plasters, or at least immobilizing bandages made of soft material, are still applied. On the other hand, the early functional dosed mobilization is important for the sliding of sutured tendons, for the prevention of capsular shrinkage of the joints, for the maintenance of muscular strength (otherwise catabolism ), and even for the physical and psychological well-being.

Because a more than 30% fatal infection with tetanus can be avoided by simple, harmless and inexpensive vaccination , the injured person has to be checked for vaccination protection within 6 to 12 hours and, if necessary, immunized. The prophylactic vaccination in the event of injury should be carried out according to the recommendations of the Standing Vaccination Commission ( STIKO ) of the German Medical Association .

Not every wound heals undisturbed. Therefore prophylactic or therapeutic antibiosis can also be part of wound treatment.

A preventive dose is simply unnecessary in the case of simple wounds, to be rejected because of the increased resistance to antibiotics, especially in hospitals (see infectious hospitalism ) and, thirdly, it is costly.

The situation is different when it comes to operations on organs that are contaminated with bacteria, such as the large intestine, or when it comes to risky operations such as the heart. In this case, standardized antibiotics based on randomized and recognized studies are required. This is usually administered parenterally ( intravenously or intramuscularly ), i.e. it has a systemic (= body-wide) effect .

A wound healing disorder inside the body after severe, traumatic violence can lead to blood poisoning ( sepsis ). In such cases, therapeutic antibiotic treatments are undisputed. However, in the case of a severe wound, it should not automatically be concluded that there is a therapeutic necessity.

Wound healing disorders can be classified according to time and cause.

Brief comments on those listed in the classification:

These wound healing disorders are not caused by germs. The most well-known are:

Wounds that take an unusual, chronic course to heal are also based on other diseases and are therefore only symptomatic of those. Even when using the most modern methods of local wound treatment, such a “chronic wound” can only be healed when the underlying disease has been cured or ameliorated.

Delayed wound healing can be caused by circulatory disorders ( PAD ) or varices . A diabetes mellitus alone can already delay healing for an unbalanced metabolism.

Noble metals, germ-free and chemically stable plastics, even certain glasses, can heal in the organism as so-called foreign bodies (Latin: Plur. Corpora aliena) after injuries or operations . If, on the other hand, the materials are incompatible, such as non-ferrous metal or large amounts of dead bone tissue (so-called sequesters ) or even infected, purulent secretion occurs, initially encapsulated in an abscess . The pus later empties through non-healing, tubular tissue crevices, the fistulas , to the surface of the body as long as the causative material is still in the body. This type of fistula, the so-called tubular fistula, has (in contrast to a lip fistula) no inner lining of the mucous membrane. Therefore, once its cause has been eliminated, it heals quickly.

There is no reliable information about the frequency of chronic wounds. It is estimated that 1–2% of the adult population of western industrialized nations suffer from a chronic wound. The probability of developing a chronic wound increases with age and is also estimated at 4–5% from the age of 80. The unclear data situation is due to the unclear definition, in particular from when one can speak of stagnation in the healing process or of chronicity .