This article covers the surgical instrument. For the crime thriller of the same name, see crime scene: scalpel . 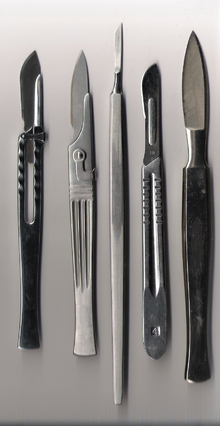 Scalpels from different manufacturers with changeable (1st, 2nd and 4th from the left) and fixed blade (the others)

A scalpel (from Latin scalpellum , ' lancet of doctors', diminutive of scalprum , 'carving knife', 'chisel') is a surgical instrument for cutting through tissue sharply . Whereas in the past scalpels - all one-piece at the time - were reused after cleaning, possible regrinding and sterilization - similar to syringes and sewing needles in the past - today, single -use blades are used. The massive scalpel handle is often reused and a new scalpel blade is attached.

The blade is also occasionally changed during an operation, as it can become blunt after just a few cuts and would damage the tissue more if it were to be used again instead of severing it smoothly.

Today the scalpel is mainly used to cut the skin of an operation . Subsequently, the electrocautery (advantages due to simultaneous hemostasis) and blunt preparation instruments (scissors, tweezers, etc.) will continue to be used. Used disposable scalpels carry a potential risk of infection due to the possibility of stab injuries and must therefore be properly disposed of in a disposal box after use . When changing blades or removing them from the handle, you should work as safely as possible and avoid touching the blade with your fingers. A needle holder according to Hegar is particularly suitable for safe changing , with which one can safely grasp the blade and minimize the risk of injury and infection. Scalpel injuries account for 7–8% of all physical damage caused by sharp objects.

The scalpel is next to the tweezers , the most important tool in the preparation of bodies in the context of the anatomical training in the first terms of the medical studies ( dissection ).

Because of comparable work, scalpels are also used in the preparation of hunting trophies and dermoplastics . Strong blades and handles are occasionally used for red work during the hunt (advantage of high blade sharpness, regrinding as a "single-use item" not necessary).

Scalpels are often used for filigree manual cutting work such as B. occur in graphics or model making are used. As close relatives, there are also special precision craft knives in this area, mostly with a cylindrical handle and also replaceable blades. The transition to smaller cutter knives is fluid, the latter typically having snap-off blades , which means that the entire blade does not have to be replaced as often.

If the material to be cut is to be cut through almost or completely, a sufficiently soft cutting surface helps to protect the blade, especially not to break off its sensitive tip.

Digital cutters guide a small, scalpel-like knife, the holder of which is rotatable around a vertical axis, horizontally over and through flat or curved thin material: plastic film, paper or gray cardboard. The cutting edge is vertical or at the top slightly inclined in the cutting direction. The blade plane is guided tangentially to the cutting contour by dragging or calculated motorized.

The scalpel was already considered a special instrument in early cultures. Initially, it was used as a small knife in the form of a flint shaped for everyday use. In the Greek Neolithic (Neolithic) use was already extended to surgical purposes (e.g. for skull trepanation - drilling a hole in the skull). So the stone knives remained in use later for the ritual circumcision of the Egyptians and Israelites. Such a stone knife is already mentioned in the Codex of the Hammurabi. In it, definitions are discovered that were drawn up by Hammurapi, according to which the remuneration of a doctor was based on how skillfully he could use the scalpel. It also specifies the doctor's punishment for malpractice with a scalpel. In the Roman period bronze scalpels were still used in isolated cases, but the steel knife was generally used. With the instrument were u. a. the following interventions performed: removal of foreign bodies in the skin and deeper, opening of abscesses, bloodletting, bladder stone incision . Since the different tasks also required a corresponding adjustment of the scalpel, this instrument eventually developed into a medical instrument as shown above. 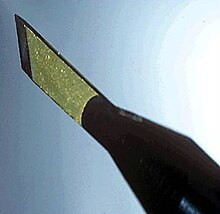 A scalpel with a diamond blade

There are blades in different shapes (blade shape), sizes and materials, depending on which tissue or where the operation is to be performed. The materials used are stainless steel , hardened steel , stainless steel, high-strength carbon steel, titanium , ceramic, flint and obsidian . Steel blades are not suitable during operations with magnetic resonance imaging . In surgical use there are alternatives to the scalpel, such as: B. the electric cautery , ultrasonic knife or scissors and the use of a laser .

Blade no. 15. for single use for surgical scalpel

Handle # 3 is the most common small scalpel handle. Handle # 7 is a very slender, longer shape for the same small blades.

The # 4 handle is the most common shape of a larger scalpel. The matching blades are also correspondingly larger. The following is an (incomplete) overview of known blades:

Longer blades with a straight back, a wedge-shaped point without a bevel and an adjoining concave-curved cutting edge are used to cut surgical sutures .

Since clinic employees are often infected by stab wounds and cuts with contaminated instruments, the technical rule for biological agents in health care and welfare care (TRBA 250) was revised in 2018 with regard to the risk of this type of injury.

A safety scalpel is characterized by a protective sheath in which the blade is originally hidden, is only extended by the surgeon and is pulled back into the protection after use. If this protective cover is partially transparent, the blade figure can also be recognized in the secured state. A safety scalpel equipped in this way reduces the risk of injury when giving, removing and disposing of it.

Safety scalpels are now to be used, among other things, for patients with proven high-risk infection, with a potential risk to others, for treatment in the penal system, in the rescue service, in emergency surgery.