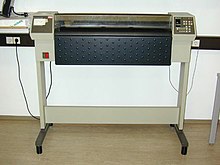 A plotter (from English to plot = 'to draw'), also known as a curve recorder in German , is an output device that displays function graphs , technical drawings and other vector graphics on various materials. They are one of the few devices that can directly display vector graphics without converting them into raster graphics beforehand . Their forerunners were the XY recorders used in measurement technology .

Since the 1990s, plotters have increasingly been replaced by large format printers , which are still often referred to as plotters today. 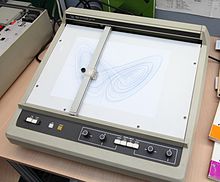 The pen plotter is designed for presentations on paper, usually DIN A4 to A0. To do this, he uses a ballpoint pen, felt pen or ink pen attached to a cart . This assembly can be moved thanks to its attachment to rails. With the flatbed plotter , the paper is fixed and the carriage moves in the XY direction over the paper, while with the roll plotter the paper is moved by a roller and the carriage only has one degree of freedom . This design enables the use of an automatic paper feed with a drawer. Most plotters work with pens of different line widths and colors, which are housed in a so-called carousel and are automatically attached to the car if necessary. Both mechanisms allow a quick display of vector graphics such as simple lines and circles as well as rather unadorned lettering.

Towards the end of their era, pen plotters were only used to draw diagrams. Today they have mainly been replaced by laser or inkjet printers of the appropriate size, whereby vector graphics are converted into raster graphics before printing.

Some pen plotters can be converted to cutting plotters. 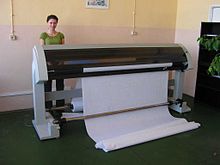 The cutter is a plotter that uses a knife in place of the pens. The contours of the vector graphics are cut into a labeling film without damaging the carrier paper ( plotter paper ). There are mainly two types of device with different cutting head concepts: drag knife and tangential knife.

With a drag knife, the cutting edge is not in the center of the axis. If you now plot the desired contours, the knife is pulled (dragged) or the knife head is lowered and the film is moved. In order to guarantee a clean cutting result, the plotter's control must now take into account the offset of the knife tip when calculating the plot path. The advantage of the drag knife technology lies in the simpler construction of the cutting head and the associated lower device prices, as well as in the higher plotting speed, since the cutting knife does not have to be lifted at acute angles.

Cutting plotters with tangentially controlled knives have a much more complex cutting head. A separate motor guides the knife in every curve at the appropriate angle. The knife is raised, turned and set down again at acute angles. This only takes a few tenths of a second, but overall it increases the plotting time. The great advantage of the tangential knife lies in a wide range of applications. The knives allow more leeway in the design of the cutting edge geometry , so that stronger and thicker materials can be processed much more precisely than is the case with drag knives .

However, another effect can come into play here, which does not play a role in plotters with drag knife technology: the running accuracy. Objects are often calculated by the plot software in such a way that the film has to be moved back and forth as little as possible. The film cannot be transported as precisely (slip) as is the case with the cutting head. As a consequence, motif shapes are often “cut in” (especially when the same motif is repeated in series) and not executed as a cut. Since tangential plotters have to lift the knife anyway at acute angles, the control software optimizes the film transport if necessary. When returning to the cutting path later, the touchdown point can often not be hit again optimally.

Cutting plotters are used to display logos or lettering , so-called adhesive lettering . With them, the contours (vectors) of the letters are cut into the film using the cutting technique described above. After manually removing the superfluous film parts (weeding), these logos or writings can be applied to other objects or surfaces such as vehicles, shop windows, walls or signs using transfer film. In the case of multicolored logos or fonts, the different colors are cut out of the respective color foils and put together on the background using the transfer foil. So-called flex film or flock film is used to image textiles , the motifs of which are also contour-cut with the cutting plotter and transferred to the textile with a hot press.

A pen holder can usually also be used with cutting plotters, so that this can also be used as a single-color pen plotter.

The laser plotter is an extension of the cutting plotter. The cutter of the cutting plotter is replaced by an optical system that directs a laser beam onto the material to be processed. The laser beam itself is usually generated on the back of the device. The advantage of the laser cutter is that the cut is made stress-free for the material, so that very fine contours can also be cut. In addition, the laser plotter allows the laser engraving of materials such as wood, leather or anodized aluminum. The advantage of laser engraving is its durability and durability. Usually, CO 2 lasers are used in these systems , although some versions with YAG lasers are also available.

For a number of years there have been plotters based on the laser printer principle , mostly using LED technology, hence also called LED plotters . Manufacturer of this technique, which is currently printing speeds of up to 15 meters per minute ( monochrome allowed) are next to the inventor company Xerox also Océ and KIP . KIP recently introduced the first large format color plotter based on LED technology.

The photoplotter, also known as a light drawing system, contains a light head that is used to draw on film. They are designed as flatbed plotters or drum plotters. After developing, the film can be used as a master copy. One application example is the production of printed circuit boards, which is the most common area in which the photoplotter is used.

With the drum plotter, the film is attached to a rotating roller, the drum, while with the flatbed plotter it rests on a flat surface.

Is a plotter Controls mostly of special CAD - software . The HP-GL printer language developed by Hewlett-Packard has also established itself with other manufacturers to control the plotter . Although not designed for this, HP-GL evolved into the data exchange format for vector graphics because of its simplicity . Most CAD programs support export in HP-GL format. The import of HP-GL files as graphics may be difficult. a. possible in OpenOffice.org .

Today HP-GL / 2 is used as a further development of HP-GL. An important innovation is the ability to define line widths (and other line attributes) through the software. Since HP-GL was developed for pen plotters, there are no commands for the selection of line widths, because these were determined by the pens. The user had to equip the pen carousel according to his wishes.