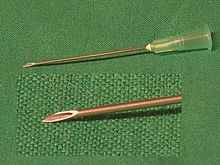 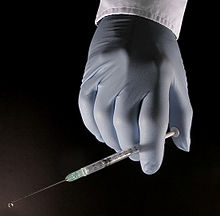 A cannula (from French canule ), also hollow needle or injection needle , is a hollow needle that is used in medicine to penetrate ( puncture ) human or animal tissue in order to introduce ( inject ) or dispense liquids with the help of a syringe withdraw (e.g. blood sample ). Cannulas can also serve as the stylet used to provide a catheter introducing remaining after withdrawal of the cannula in the body and then feed method is carried out through which the liquid withdrawal or.

The end of the cannula is usually sharpened with a bevel so that a small cut can be made when it penetrates the tissue. The puncture would be more painful if the tissue were not cut, but only displaced as with a simple needle . Some products have an additional coating to enable the injection to be as painless as possible. By piercing tissue or material, the sharpness of the cannula tip is partly lost, making the injection more painful. For this reason, from so-called cannula after removal of medication vials to be changed (to-piercing rubber closure) before the actual injection. To avoid needlestick injuries and any resulting illness, medically used cannulas are disposed of in so-called cannula disposal boxes. It should not be put back in the protective cover ( recapping ) for reasons of infection protection because of the possible stab injuries.

If the tissue is not to be injured, blunt cannulas or so-called button cannulas , in which the tip is not sharpened, are used. In the case of blunt cannulas, the hollow needle ends vertically cut and bluntly ground; in the case of button cannulas, it has a small, bead-shaped, thickened head. Such cannulas are used to introduce liquids or gels (e.g. rinsing liquids, medicaments) into existing openings (body cavities). You will e.g. B. used in dentistry and in the treatment of chronic wounds, but also in dental technology, industry and craft. They are also used for precise dosing and application of liquid and viscous material and in this case they are called application cannulas.

Units of measure for injection needles

The size of the cannula can be specified in several ways, the usual information is in millimeters (mm) ( outer diameter ), gauge , according to the Pravaz system (size) or in Charrière or French (Charr., Ch., Fr.) ( the simplified circumference calculated with 3 instead of pi ).

Particularly fine cannulas are used for the subcutaneous injection of z. B. Insulin used.

Named after the French orthopedic surgeon Charles-Gabriel Pravaz (1791–1853) who invented a preform (Pravaz syringe) for the injection syringe that is common today. The designation of the Pravaz system is "Gr." (For size).

Overview and comparison table for the color coding, dimensions and sizes of cannulas

* The ISO standards assign the size specifications in gauge to the outer diameter and the color. As soon as no measurement is given in gauge, the corresponding information in the line is not taken from the ISO standard, it is only included for the sake of clarity.

Use in chemical laboratories

Cannulas are also used in chemical laboratories to remove liquids from vessels with the aid of syringes or to fill them. To do this, a septum ( puncture membrane ) is often pierced.

The so-called transfer cannula is a special form of cannula . This is a steel capillary cut at an angle on both sides, which is used to transfer large quantities of liquid from one piston to another in the absence of air. To do this, both flasks are closed with a septum. The pistons are connected to the transfer cannula so that it is immersed in the liquid to be transferred. An overpressure must be built up on the piston with the liquid, for example by means of a balloon filled with inert gas. So that the liquid can now get into the other piston, the pressure must be able to decrease there. A cannula is simply inserted through the septum. Schlenk flasks are often used for this type of work in the absence of air .

To produce the hollow needles, sheet steel is wrapped around a metal mandrel and welded. The resulting steel tube is then drawn in length several times, with the diameter and wall thickness steadily decreasing until the desired values ​​are finally reached. Then the resulting fine steel tube is cut into individual cannulas. Now the sharpening takes place. Then the tips are carefully deburred, chamfered (chamfered) and sterilized .

Grind of the cannula tip