In the natural sciences, one tests the validity of hypotheses through their falsification . In particular, the presumed link between cause and effect is checked and an assumed connection must be formulated in such a way that it can also be refuted. With this claim, a measure taken can only be considered effective if there are also procedures to prove its ineffectiveness and these have then produced a negative result in this regard. In many areas of medicine, this scientific procedure is now made more difficult by various circumstances, especially since strong subjective influences tied to the individual person can occur, both in the course of the disease as for the healing success. This is clearly shown by the placebo effect , which makes it necessary to carry out so - called double - blind studies when assessing effectiveness .

Problem of the evidence 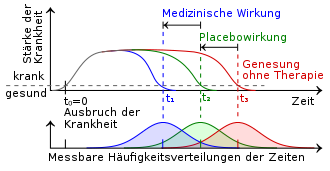 In order to assess the effectiveness of a therapy, at least three different possible times of recovery must be taken into account. A therapy is considered effective if and ineffective if .

Diseases can take a different course of healing, depending on whether a medically effective therapy, a sham therapy (placebo) or no measure at all is used. If the distinction between sick and healthy is made according to the same stipulations, the three treatment methods can be compared according to the respective times of recovery (marked with , and in the adjacent figure ). A criterion for the effectiveness of a therapy can then be expressed by the context . A medically ineffective therapy shows no difference to placebo ( ).

The problem with assessing the effectiveness of a therapy is the fact that observing the course of a disease normally only reveals the time , i.e. the duration of the disease under therapy. In order to assess the possible healing success, however, it would also have to be known in each case what would correspond to the pure placebo effect. Since the times can vary from case to case, a comparison between two individual observations alone - the use of verum therapy on the one hand and a corresponding placebo therapy on the other - is not sufficient. The difference between and can therefore only be determined from the mean values ​​for each of these times in a larger group of people. To do this, a large number of individual observations must be carried out, distributed over two types of experiment. If the times and statistically have been determined with sufficient accuracy, the difference in the mean values ​​can be formed and assessed. In order to obtain a reliable statement, both tests must be carried out under otherwise identical conditions, statistically independent and free of distortion.

The dilemma that a single or a few individual observations do not allow a reliable statement about the effectiveness of a therapy often makes it impossible to use personal experience to argue for or against a therapy. Examples of successful or unsuccessful healing are often presented in discussions, which, however, as a report on an individual case - so-called anecdotal evidence - can neither be easily transferred to other cases nor allow a generally valid statement. Conversely, the dilemma is that a therapy that is generally considered to be effective can fail or even harm in individual cases, even if it has been properly applied. Because the general validity for these cases is a statistical determination, and so in principle only inferences of the probability for the individual case are possible.

Criteria of a good study

In most cases, the medical effectiveness of a treatment method or drug is checked in the course of clinical examinations.

The name of the author or authors of a study as well as the institution or company at which the study was carried out must be mentioned. Any binding interests must be listed. It is also important who financed the study. In addition, the following points are important in a study:

COMET may serve as an example of a good study here .

With correspondingly large studies, the phenomena of self and spontaneous healing can hardly influence the study results.

Medicines without a successful proof of efficacy will not receive drug approval . This can only be carried out through approved clinical studies with effectiveness criteria accepted by the drug authorities.

Numerous alternative medicine currents and also those of classical medicine claim effectiveness for themselves without having proven this through high-quality studies. For example, two studies jointly planned and carried out by scientific doctors and homeopaths demonstrated an effect of homeopathic remedies that was only roughly comparable to that of the placebo.

Limits of the assessment of an effectiveness

Due to the high complexity of the “human” system, the scientific paradigm of separating cause and effect reaches its limits, since not all influencing variables can be expressed (parameterized) in numbers in order to be accessible to statistical analysis. The unequivocal diagnosis of a disease often causes greater difficulties.

Despite the numerous problems, the application of the scientific method in medicine has led to a great expansion of medical knowledge and therapeutic options.

Another limitation, however, is that “medical effectiveness” is a term that initially only refers to an individual. It can only be generalized because of the great physiological similarity between different people. That is why the following always applies: What helps one person can be ineffective or even harm another person.

In a broader sense, the term effectiveness is also related to a health system as a whole. The science that deals with the successes and limitations of medicine is medical sociology , as medical science is practiced within a state-controlled system.

Legislators require that individual doctors base their decisions on existing medical knowledge. As the state of the art , this secured knowledge is published in the relevant journals or communicated at advanced training events.

In the meantime, guidelines have been developed through evidence-based medicine that a responsible doctor can follow. Since knowledge in medicine has increased significantly in the last few decades, it must be able to assess the quality of a submitted study in order to separate the "wheat from the chaff". He must at least be able to rely on the knowledge of recognized specialists.

The significance of medical studies is hierarchically ordered by evidence-based medicine. The most meaningful are (in descending order)

In the past, the health insurance companies' obligation to provide benefits when using treatment methods, the therapeutic effectiveness of which has not yet been scientifically proven, was a matter of the highest court rulings on several occasions . It should be noted, however, that in these cases the courts expressly did not deal with the effectiveness of complementary medical methods themselves, but only with the criteria that justify a claim for reimbursement by the health insurance companies for treatment according to concepts without proven therapeutic effectiveness. The following judgments and resolutions must therefore not be viewed as evidence of the effectiveness of the sometimes controversial healing systems of alternative or complementary medicine .

"It is incompatible with the basic rights (...) to exclude a person with statutory health insurance, for whose life-threatening or regularly fatal illness, a generally recognized medical standard corresponding treatment is not available, from the benefit of a medically applied treatment method chosen by him if there is a not entirely remote prospect of a cure or a noticeable effect on the course of the disease. "(Guiding principle for the decision of the First Senate of December 6, 2005, 1 BvR 347/98)

The judgments and resolutions mentioned were always decisions of the courts in specific individual cases. Therefore, no general entitlement to reimbursement of costs by the health insurance companies in the application of complementary medical methods and concepts can be derived from them.

In order to characterize the dose-dependent effect profile and to limit the area in which the effect of a drug already produces the desired effect and in addition few undesirable effects - so-called undesirable side effects - the concept of the therapeutic range is used for the lower and upper threshold of this range characteristic dosages quantitatively related to each other. For example, penicillin has a wide therapeutic range; H. even relatively high doses of this drug are still well tolerated. Digoxin , on the other hand, has a narrow therapeutic range and serious side effects can occur even if the usual dose is doubled.

When transmitting medical literature in English, both efficacy or efficacious as well as effectiveness or effective and also efficiency or efficient can be translated as "effectiveness" or "effective".

In general usage, however, the fields of meaning overlap, whereby efficacy focuses more on the theoretical effectiveness, effectiveness on the actual benefit and efficiency on the organizational or economic effectiveness.

In the context of medical procedures, too, these terms are used with overlaps and not uniformly and thus offer scope for interpretation, whereby the following are preferred: